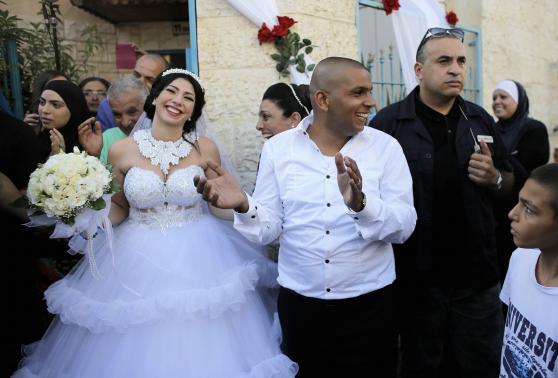 Groom Mahmoud Mansour, 26, and his bride Maral Malka, 23, celebrate with friends and family before their wedding in Mahmoud’s family house in Jaffa, south of Tel Aviv August 17, 2014. Israeli police blocked more than 200 far-right Israeli protesters from rushing guests at the wedding of a Jewish woman and Muslim man as they shouted “death to the Arabs” in a sign of tensions stoked by the Gaza war. REUTERS/Ammar Awad
Share:

Israeli police blocked over 200 far-right protesters from attempting to enter a wedding between a Jewish woman and Muslim man on Sunday. The protesters chanted “death to the Arabs” as they gathered outside the wedding hall, as prejudice against Palestinians, Arabs and Muslims continues to rise in Israel.

A court had earlier rejected a plea by Mahmoud Mansour, a young Muslim man, and Morel Malka, a Jewish born woman who converted to Islam, to have the protest banned at their wedding in Rishon Letzion, south of Tel Aviv.

A group called Lehava, which campaigns against assimilation between Israelis and Palestinians, organised the protest and cited religious grounds for their objection to the marriage.

Many of the protesters, who were young men wearing black shirts, accused Malka of being a “traitor against the Jewish state” and shouted “may your village burn down.” They waved Israeli flags as they chanted “death to leftists” and held placards saying “Assimilation is a Holocaust.”

A counter demonstration was held opposite the right-wing protesters, where a few dozen Israelis held flowers and sang love songs, according to Haaretz. Their signs said “Love for everyone” and “Only love will win”, prompting some guests to thank the counter-protesters.

Mansour, the groom, told Israel’s Channel 2 the protest had failed to ruin their wedding.

“We will dance and be merry until the sun comes up. We favour coexistence,” he said.

Attacks against Arabs and Israeli opponents of the war in Gaza have risen in recent weeks. Palestinian teenager Mohammed Abu Khdeir was kidnapped and burnt to death in Jerusalem last month and far-right protesters attacked an anti-war march in Tel Aviv during Israel’s assault on Gaza.

Around 20 percent of Israel’s population are Arab, with the vast majority of them Muslims. Religious authorities oppose intermarriage due to fears it will negatively impact on Israel’s Jewish population.

The father of the bride on Sunday, Yoram Malka, told Israeli television he objected to his daughter’s wedding, describing it as a “very sad event.” He expressed anger that his daughter had converted to Islam and did not have a relationship with his new son-in-law: “My problem with him is that he is an Arab.”

“There is a red line between freedom of speech and protest on the one hand, and incitement on the other,” he wrote. “Mahmoud and Morel from Jaffa have decided to marry and to exercise their freedom in a democratic country.”

“The manifestations of incitement against them are infuriating and distressing, whatever my opinion or anyone else’s might be regarding the issue itself. Not everyone has to share in the happiness of Mahmoud and Morel – but everyone has to respect them,” he added.