US renews its travel advisory to Lebanon 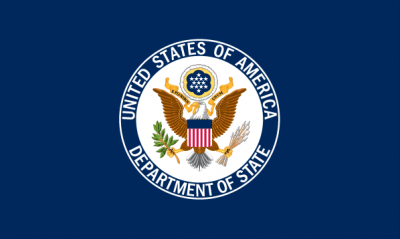 The United States reiterated on Friday  its travel advisory to Lebanon in light of recent security incidents in the country and warned U.S. citizens to avoid all travel to the country.

Washington, DC —August 15, 2014. The Department of State urges U.S. citizens to avoid all travel to Lebanon because of ongoing safety and security concerns.  U.S. citizens living and working in Lebanon should understand that they accept risks in remaining and should carefully consider those risks.  This supersedes the Travel Warning issued on January 31, 2014.

The potential for death or injury in Lebanon exists in particular because of the frequency of terrorist bombing attacks throughout the country.  Many of the attacks have targeted specific individuals or venues, but nearly all cases have resulted in death and injuries to passersby in the vicinity.  Although there is no evidence these attacks were directed specifically at U.S. citizens at this time, there is a real possibility of “wrong place, wrong time” harm to U.S. citizens.  The most recent wave of bombings began in June 2013, with four bombings in Beirut and Tripoli that collectively left hundreds dead and wounded.  In November 2013, two suicide bombers attacked the Iranian embassy, killing 23 and injuring more than 150.  In December 2013, former Finance Minister Mohammad Chatah and six others were killed by a car bomb in downtown Beirut.  On February 19, in an attack against the Iranian Cultural Center, two suicide bombers killed at least five and wounded over 30 in southern Beirut.  On February 22 a car bomb was detonated at a check point in Hermel, killing one and wounding 14.  On March 17, a car bomb exploded in the eastern Bekaa town of Nabi Othman, causing two deaths and more than 10 injuries. On June 20 a suicide bomber detonated himself at a checkpoint on the main Damascus-Beirut highway, resulting in one killed, and over 30 injured.  On June 24 a suicide car bomb was detonated in southern Beirut after Lebanese authorities stopped the driver, killing two and wounding a dozen people at a nearby cafe.  On June 26, a suicide bomber detonated his vest as security forces were closing in on him at a local tourist hotel in downtown Beirut, wounding three of the security forces.

Attacks now regularly involve suicide bombers.  Similar incidents can occur without warning.  In addition to these attacks, there have been numerous reports in the media of Lebanese security forces disrupting other planned bombings.  To date, Lebanese security forces have been successful against potential suicide bombers, who have often been forced to detonate their vests or vehicles short of their targets.  This practice of suicide bombers adds an additional element of unpredictability, since just avoiding potential target areas does not provide any guarantee from being in the wrong place at the wrong time.

Sudden outbreaks of violence can occur at any time in the country, and major cities in Lebanon have seen armed clashes.  There are frequent armed clashes in the city of Tripoli, particularly between the neighborhoods of Bab al-Tabbaneh and Jabal Mohsen, which have resulted in deaths and injuries.  The Lebanese Armed Forces are routinely brought in to quell the violence in these situations.  The Lebanese government cannot guarantee protection for citizens or visitors to the country in the event violence should occur suddenly.  Access to borders, airports, roads, and seaports can be interrupted with little or no warning.  Public demonstrations occur frequently with little warning and have become violent in some instances.  Family, neighborhood, or sectarian disputes can escalate quickly and can lead to gunfire or other violence with no warning.  The ability of U.S. government personnel to reach travelers or provide emergency services is severely limited.

The Department of State considers the threat to U.S. Government personnel in Beirut sufficiently serious to require them to live and work under strict security restrictions.  The internal security policies of the U.S. Embassy may be adjusted at any time and without advance notice.  These practices limit, and may prevent, access by U.S. Embassy officials to certain areas of the country, especially to parts of metropolitan Beirut, the city of Tripoli, northern Lebanon, the Bekaa Valley, and southern Lebanon.  Because of security concerns, unofficial travel to Lebanon by U.S. Government employees and their family members is strictly limited, and requires the Department of State’s prior approval.

Extremist groups operate in Lebanon, including some such as Hizballah, the Islamic State of Iraq and the Levant (ISIL), the Abdullah Azzam Brigades (AAB), and al-Nusrah Front (ANF), that the U.S. Government has designated as terrorist organizations.  ISIL and ANF have claimed responsibility for suicide bombings in Lebanon, and these groups are active in north Lebanon, the Bekaa Valley, and in border areas with Syria.  U.S. citizens have been the target of terrorist attacks in Lebanon in the past, and the threat of anti-Western terrorist activity remains in Lebanon.  U.S. citizens traveling or residing in Lebanon despite this Travel Warning should keep a low profile, assess their personal security, and vary times and routes for all required travel.  U.S. citizens also should pay close attention to their personal security at locations where Westerners generally are known to congregate, and should avoid demonstrations and large gatherings.  They should consider avoiding areas where bombings have taken place recently.  The most recent Security Messages are posted on the U.S. Embassy Beirut website.

Hizballah maintains a strong presence in parts of south Beirut, the Bekaa Valley, and areas in southern Lebanon.  Hizballah has been the target of attacks by other extremist groups for their support of the Asad regime in Syria.  The potential for violence between Hizballah and other extremist groups throughout the country remains a strong possibility.  Hizballah and other groups have at times detained and extensively interrogated U.S. citizens or other foreigners for political motivations.

U.S. citizens in Lebanon should monitor ongoing political and security developments in Syria, as these often impact stability in Lebanon.  The conflict in Syria has resulted in numerous security incidents in the border regions with Lebanon, as well as in other parts of the country.  Over the past year, there were numerous incidents of cross-border shelling and air strikes of Lebanese villages from Syria, which resulted in deaths and injuries, as well as reports of armed groups from Syria who kidnapped or attacked Lebanese citizens living in the border area.  Clashes between Lebanese authorities and criminal elements occurred in areas of the Bekaa Valley and border regions.  Similar incidents could occur again without warning.  With the potential for violence and abductions, the U.S. Embassy urges U.S. citizens to avoid the Lebanese-Syrian border region altogether.

Kidnapping, whether for ransom or political motives, remains a problem in Lebanon.  Kidnappers have abducted business people under the guise of coming to Lebanon for meetings. Suspects in kidnappings sometimes have ties to terrorist or criminal organizations.  Although the U.S. government places the highest priority on the safe recovery of kidnapped U.S. citizens, it is U.S. policy not to make concessions to hostage takers.  U.S. law also makes it illegal to provide material support to terrorist organizations.

Demonstrators sometimes block the primary road between downtown Beirut and Rafiq Hariri International Airport without warning.  Access to the airport also may be cut off, sometimes for extended periods, if the security situation deteriorates.

Rocket attacks from southern Lebanon into Israel have occurred at an increased rate, in connection with the violence between Israel and Hamas in Gaza.  These attacks, normally consisting of a few unsophisticated rockets fired at northern Israel, often provoke a prompt military response from Israel in the form of artillery fire.  The rocket attacks and responses can occur with no warning.  Skirmishes and tense exchanges between the LAF and the Israel Defense Forces along Lebanon’s southern border also may occur with no warning.  Landmines and unexploded ordnance pose significant dangers throughout southern Lebanon, particularly south of the Litani River, as well as in areas of the country where fighting was intense during the civil war.  More than 40 civilians have been killed and more than 300 injured by unexploded ordnance remaining from the 2006 Israel-Hizballah war.  Travelers should watch for posted landmine warnings and strictly avoid all areas where landmines and unexploded ordnance may be present.

Palestinian groups hostile to both the Lebanese government and the United States operate largely autonomously in different areas of the country inside refugee camps.  Intra-communal violence within the camps has resulted in shootings and explosions.  U.S. citizens should avoid travel to Palestinian refugee camps.

U.S. government-facilitated evacuations, such as the evacuation that took place from Lebanon in 2006, occur only when no safe commercial alternatives exist.  Evacuation assistance is provided on a cost-recovery basis, which means the traveler must reimburse the U.S. Government for travel costs.  The lack of a valid U.S. passport may hinder U.S. citizens’ ability to depart the country and may slow the U.S. Embassy’s ability to provide assistance.  U.S. citizens in Lebanon should therefore ensure that they have proper and current documentation at all times.  U.S. Legal Permanent Residents should consult with the Department of Homeland Security before they depart the United States to ensure they have proper documentation to re-enter.  Further information on the Department’s role during emergencies is provided on the Bureau of Consular Affairs’ website.

U.S. citizens living or traveling in Lebanon should enroll in the Department of Smart Traveler Enrollment Program (STEP), at the Bureau of Consular Affairs’ website, Travel.State.Gov, to receive the latest travel updates and information and to obtain updated information on travel and security within Lebanon.  U.S. citizens without Internet access may enroll directly with the U.S. Embassy in Beirut.  By enrolling, U.S. citizens make it easier for the Embassy to contact them in case of emergency.  The U.S. Embassy is located in Awkar, near Antelias, Beirut, Lebanon.  Public access hours for U.S. citizens are Monday, Tuesday, and Thursday, from 8:00 a.m. to 11:00 a.m.  U.S. citizens must make appointments in advance.  U.S. citizens who require emergency services outside these hours may contact the Embassy by telephone at any time.  The Embassy’s telephone numbers are (961-4) 542-600, (961-4) 543-600, and fax (961-4) 544-209 (Note:  the (961) is only necessary when dialing from outside the country.  When dialing inside the country, use ‘0’ before the number, e.g., 04 542-600).

Information on consular services and enrollment in STEP can also be found at the U.S. Embassy in Beirut’s website, or by phone at the above telephone numbers between 2:00 p.m. and 4:00 p.m., Monday through Friday local time.  U.S. citizens in Lebanon may also contact the consular section by email atBeirutACS@state.gov.

For additional information, U.S. citizens should consult the Department of State’s Country Specific Information Country Specific Information for Lebanon.  You can also stay up to date by bookmarking our Bureau of Consular Affairs website, Travel.State.Gov, which also contains current Travel Warnings and Travel Alerts.  Follow us on Twitter and the Bureau of Consular Affairs page on Facebook.