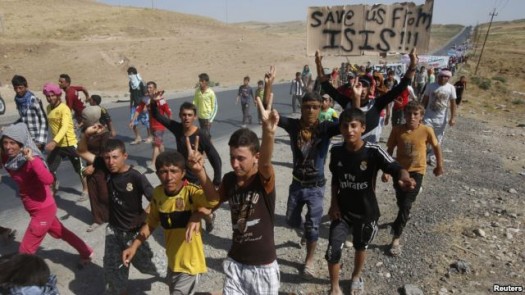 Displaced people from the minority Yazidi sect, who fled the violence in the Iraqi town of Sinjar, flash signs as they take part in a demonstration at the Iraqi-Syrian border crossing in Fishkhabour, Dohuk province, August 13, 2014.
Share:
U.S. troops found fewer trapped civilians on a mountain in northern Iraq than expected, making it “far less likely” that the U.S. will conduct a rescue operation, U.S. Defense Secretary Chuck Hagel said.

A team of about 20, including U.S. Army special forces, spent 24 hours on Mount Sinjar, where some administration officials had said they thought at least 20,000 people, mainly minority Yezidis, were stranded and at risk of dying from dehydration and hunger after fleeing Islamic State militants.

Instead, the team reported finding about 3,500 to 4,000 Yezidis on the mountain, and that at least 1,500 of them prefer to stay there because they have their animals with them, according to a U.S. official. The region’s Kurdish militia forces, known as the peshmerga, have been able to provide security, and so the Yezidis who want to remain feel safer, according to the official, who asked to speak anonymously to expand on Hagel’s comments.

“As a result of that assessment, it is far less likely we would undertake any specific rescue mission we had been planning,” Hagel told reporters yesterday.
The decision not to mount a rescue mission was taken as Hagel flew back to Washington from San Diego. For more than two hours, he was immersed in a conference call with other administration officials while his Air Force Boeing 747 circled over Tennessee and West Virgina to allow the call to continue uninterrupted by the plane’s descent.

Hagel said the military actions the U.S. has taken in recent days helped avert a humanitarian disaster that administration officials had warned could amount to genocide.

U.S. air drops of humanitarian assistance played a “rather significant role” in sustaining the civilians after they fled their homes and U.S. airstrikes “have pushed ISIS back,” Hagel said, referring to the Sunni militant group also call the Islamic State that has threatened to kill the Yezidis as non-believers.
The numbers at risk on the mountain are far fewer “than previously feared” as a result of the air drops, airstrikes on militants, the efforts of Kurdish forces and the “ability of thousands of Yezidis to evacuate from the mountain each night over the last several days,” according to a Pentagon statement issued after Hagel spoke with reporters at Joint Base Andrews outside Washington.

Asked to explain the difference between earlier assessments by administration officials that the refugees numbered in the thousands or even tens of thousands, a U.S. intelligence official said the assessment team found the Yezidi moving around in a large area, with some in hiding.

Because the refugees were not in a confined area, the U.S. reconnaissance satellites and remotely piloted aircraft surveying the area regularly were unable to count them accurately, and analysts consistently had declined to offer high confidence estimates of their numbers, said the official, who requested anonymity to discuss classified matters.

The U.S. troops that went to the mountain returned safely without engaging in combat, Hagel said. They were operating from Erbil in the Kurdish area of northern Iraq.

The team’s findings were a surprise to U.S. officials who were acting on reports from the region of an unfolding humanitarian crisis that bordered on genocide.

The World Health Organization’s Iraq representative this week said about 50,000 people were at risk on the mountain, while tens of thousands of others had trekked through Syria to the safety of the Kurdish region in northern Iraq.

In the last several days, more than 60,000 have crossed the Feshkhabour border-point through Syria to re-enter Iraq at Dohuk, according to the WHO.

The Obama administration had been considering a range of military rescue operations that could have put U.S. forces at risk in Iraq for the first time since the last American combat troops left at the end of 2011.

“You look at corridors, you look at airlifts, you look at different ways to move people who are in a very dangerous place on that mountain to a safer position,” Deputy National Security Adviser Ben Rhodes told reporters yesterday on Martha’s Vineyard, Massachusetts, where President Barack Obama is vacationing.
Although Obama has said there will be no American combat boots on the ground in Iraq, a U.S. defense official had said some U.S. troops could be needed to run a swift and orderly evacuation even though they wouldn’t be used in combat roles.

The U.S. had rallied allies to be ready to help. U.K. Prime Minister David Cameron said in a broadcast interview yesterday that he can “confirm that detailed plans are now being put in place and are under way” to rescue the Yezidis “and that Britain will play a role in delivering them.”