How the Yazidis changed Obama’s thinking on Iraq 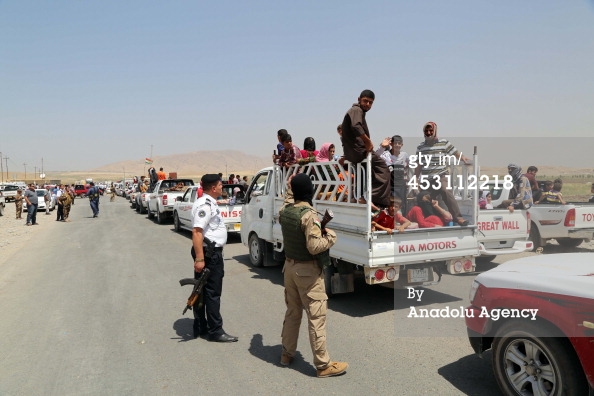 Iraqi Yazidis flee from Sinjar. Yazidis are a Kurdish ethno-religious community, representing an ancient religion that is linked to Zoroastrianism.
Share:

By: By William Inboden
There comes a time in most presidencies when events force an administration to confront the contradiction between its favored strategy and the necessity of action. The Truman administration faced this when North Korea’s surprise invasion of South Korea compelled the White House to rethink its focus on Europe while downgrading the American commitment to Asia. Instead, Truman ordered a major deployment of U.S. forces to liberate South Korea, which led to a residual American troop presence that continues to this day. The Carter administration faced this when its initial strategy of conciliation towards the USSR met with Soviet defiance, culminating in the invasion of Afghanistan, and led Carter to adopt a more assertive posture and launch a major defense build-up. We faced this in the George W. Bush administration in 2006 when our Iraq strategy of encouraging the political process while building up Iraqi forces failed to arrest a growing civil war. Instead, President Bush realized that security needed to precede political progress, which led him to announce the new counterinsurgency strategy and troop surge in January 2007.

Now, almost six years into the presidency, the Obama administration seems to be coming to a belated acknowledgement that many of its strategic assumptions, often held as cherished dogmas, are not valid. President Obama’s decision to order airstrikes on the Islamic State (formerly the Islamic State in Iraq and Syria, or ISIS — one of its several names) makes him, as Peter Baker ofThe New York Times astutely points out, the fourth consecutive American president to order military action in Iraq. It also highlights the many strategic assumptions that the White House has to jettison as it confronts the disparity between the world as the administration imagined it and the world as it actually is.

To be clear, I support these airstrikes and the accompanying humanitarian relief operation for thebesieged Yazidis on Mount Sinjar. The airdrops of food and water represent one of those moments when American capabilities and moral commitments make our nation singularly equipped to lead. The Islamic State’s advances on Kurdistan represent a significant new threat to American interests (including our consulate in Erbil and the many American citizens working in the city) and to longtime partners of the United States, and a significant new demonstration of the Islamic State’s malignant lethality. Like many other observers (and a few beleaguered voices within the administration), I also favor other steps the White House hasn’t taken yet such as increased security assistance to the Kurdish peshmerga and the Iraqi Army, in the context of a renewed American commitment to Iraq.

But it is apparent that Obama’s reluctant announcement of these strikes reveals a president agonizing over the dawning realization that his previous strategic assumptions have been incorrect. The president admitted as much in his revealing interview with Thomas Friedman, where Obama conceded his failure to plan for post-conflict stabilization in Libya after overseeing the operation to topple Qaddafi.

It is not just the Libya aftermath — particularly the Benghazi attacks — that looms over the Obama administration’s volte-face on Iraq. Other cherished dogmas are also being implicitly questioned and sometimes even rejected.

The dogma of pulling out of Iraq and avoiding any further military interventions in the Middle East is being replaced by a new phase of American military involvement in Iraq, which President Obama admits could last indefinitely.
The dogma of declaring core al Qaeda being “on the path to defeat” and dismissing the Islamic State as the “jayvee team” is being confronted with the fact that its combination of territorial control, wealth, dedicated fighters, growing recruitment of other jihadists, and Western passports make it the most serious terrorist threat to America since al Qaeda in 2001.
The dogma of pulling away from Iraq and insisting that Prime Minister Nouri al-Maliki first needs to show political progress in order to merit American support is being replaced by a realization that more involvement gives the United States more leverage, and that other Iraqis will be emboldened to choose a new leader when they are confident of the U.S. as a partner (and yes, I agree that Maliki needs to go; the question is how his exit from office can be done in the least disruptive way, with Iraqi ownership, and with the best chance for a stable successor).
The dogma that Syria is a completely separate issue from Iraq and that American involvement in the Syrian civil war would make things worse is being eclipsed by an appreciation that the Islamic State threat connects Syria and Iraq, and that American policy needs to respond accordingly.
The dogma that diplomacy is always in contrast with the use of force is being replaced by a more sophisticated realization that the most effective diplomacy is backed up by the capability to use force, and that the use of force must be integrated with political and diplomatic goals.
The dogma that the American presence and activity in the Middle East has little benefit and often makes things worse is giving way to an appreciation that American inaction can carry significant costs too, such as proliferation of jihadists, civil wars and sectarian violence, and widespread damage to American interests.
There are several other Obama administration dogmas I could list, but I trust readers get the point. For these reasons, as important as Iraq is in its own right, this month could also mark a permanent shift in the White House’s overall foreign and defense policy; time will tell. One indicator to watch will be whether President Obama shows the commitment for a protracted campaign to reverse the Islamic State’s gains and seriously erode the terrorist group’s capabilities and reach.

Finally, I have written before about the close connections between religious persecution and national security threats. The vicious Islamic State campaign to exterminate Yazidis and Christians further reinforces this point. The Islamic State targeting of religious minorities is not merely a side-effect of its territorial advances; it is central to the group’s identity and purpose. The worldview of the militant jihadist holds religious pluralism and religious freedom to be anathema, and the Islamic State perversely considers its own measures of success to include eliminating religious minorities. Just as the Islamic State’s persecution of Christians and Yazidis should have been an early indicator of the larger security threat it poses, the longer-term American response to the Islamic State will need to go beyond airstrikes to include a renewed diplomatic commitment to protecting and promoting religious freedom.