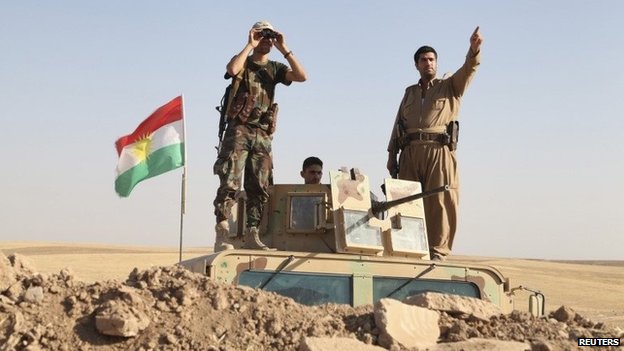 Kurdish forces watched as US air strikes hit jihadist positions Khazer, in northern Iraq
Share:
The American air strikes against a militant group in Iraq could motivate the fighters to retaliate with terrorist attacks against U.S. civilians, experts warn.

President Barack Obama’s air strikes against militants from the group Islamic State of Iraq and Syria (ISIS) “could increase the likelihood that ISIS or somebody inspired by ISIS, would strike against the homeland,” says Seth Jones, a terrorism expert with Rand Corp.

ISIS has long threatened America openly. In June the group’s leader, Abu Bakr al-Baghdadi, warned Americans that “soon enough, you will be in direct confrontation [with us].” Last week a spokesman for the group vowed that “we will raise the flag of Allah in the White House.”

Despite that bombastic rhetoric, ISIS has thus far been consumed with its fights in Iraq and Syria, and with capturing territory to form an Islamic caliphate. But counterterrorism officials worry that the fanatical group could now place a higher priority on attacking Americans. Jihadists in online forums and on Twitter are alreadycalling for terrorist attacks in response to Obama’s intervention in Iraq.

The prospect of blowback was on the mind of senior officials even before Obama approved air strikes last week.

“That’s one of the downsides of U.S. involvement,” former deputy CIA director Michael Morell told CBS News in June. “The more we visibly get involved in helping the [Iraqi] government fight these guys, the more we become a target.”

A U.S. intelligence official would not say whether the threat level has escalated, saying the U.S. continues to monitor the known ISIS threat. “ISIS has previously stated its willingness to strike targets outside of the region and the [intelligence community] is working in close coordination with our allies to track these threats,” says Brian Hale, spokesman for the Office of the Director of National Intelligence.

In July, Brett McGurk, the top State Department official for Iraq,told the Senate Foreign Relations Committee that the 30 to 50 suicide bombers per month deployed in Syria and Iraq by ISIS “are increasingly Western passport holders,” and that “it is a matter of time before these suicide bombers are directed elsewhere.”

Several experts agreed that attacking ISIS will make the group more eager to strike back against America, but said the threat is hard to calculate — and no reason to avoid taking on the group.

“U.S. strikes against ISIS may well raise that group’s interest in carrying out terrorist attacks against U.S. targets,” says Daniel Benjamin, a former top State Department counterterrorism official now at Dartmouth College. “But the significance of that shouldn’t be overstated.”

Benjamin questions whether the ISIS threat has increased significantly, given its previously known desire to kill Americans. Regardless, he adds: “We can’t let our policies be held hostage by this concern.”

Obama’s strikes this month mark the first direct U.S. attacks on ISIS in its current form. But the U.S. military did battle with the group’s prior incarnation, al-Qaeda in Iraq, during the U.S. occupation of that country in the mid-2000s. AQI never found a way to hit Americans beyond the Iraq battlefield.

But since splitting with al-Qaeda, broadening its ambition and declaring itself ISIS — and, more recently, the Islamic State — the group has attracted Westerners whose passports could grant them easy entry to Europe and the U.S.

“What is concerning, and which makes this situation different,” warns Jones of Rand Corp., is that large complement of Western fighters, which AQI did not posses. “The connections to this battlefield from the West are stronger than they were a decade ago.”

Jones says there’s precedent for the U.S. drawing the attention of a regionally focused terrorist group by targeting its ranks. The attempted 2010 Times Square bomber, Faisal Shahzad, was trained and directed to strike the U.S. by the Pakistani Taliban, which sought revenge for American drone strikes against the group’s leadership.

At least one expert on Sunni radical groups doubts that Obama’s strikes make Americans any less safe, however.

“I don’t think this changes [ISIS’s] calculus,” says Aaron Zelin of the Washington Institute for Near East Policy. “They are likely planning attacks whether the U.S. conducts targeted air strikes or not. We shouldn’t have reactionary policy when it comes to [ISIS] anyway — why would we let them continue to grow just because they aren’t attacking us now?”

“In my opinion,” Zelin says, “we should destroy them as soon as possible.”