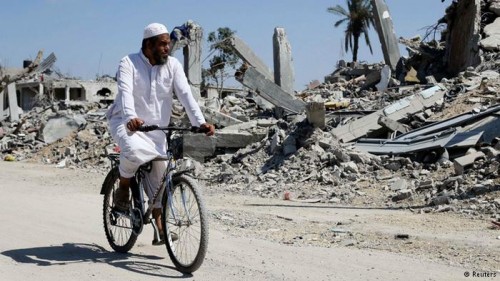 The Palestinians estimate that the Israeli military offensive caused $5 billion in damage. It’s currently unclear who will finance the reconstruction of Gaza. A conference of donor states is scheduled to meet in Norway this September.
Share:
A Palestinian negotiator says his team will quit Egyptian-brokered talks on ending the Gaza war unless Israeli negotiators return to Cairo.

Israeli negotiators left Cairo on Friday. Israeli officials have said the team will not return as long as rocket fire from Gaza continues. The Israeli army says Gaza militants have fired dozens of rockets and mortar shells at Israel over the weekend, including two on Sunday morning.

He said Sunday: “We told the Egyptians that if the Israelis are not coming and if there is no significant development, we are leaving today.”

The indirect talks between Israel and a Palestinian delegation that includes Hamas began last week.
ABC/AP