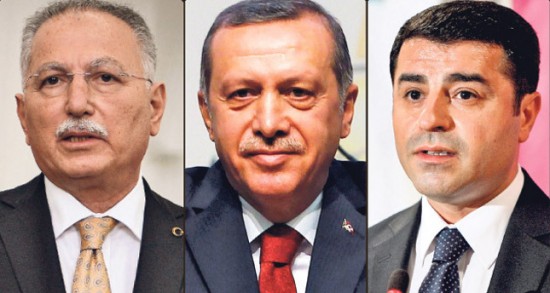 Turkish presidential candidates. From Left former head of the Organization for Islamic Cooperation, Ekmeleddin Ihsanoglu, Prime Minister Recep Tayyip Erdoğan and Selahattin Demirtaş, former co-leader of the pro-Kurdish Peace and Democracy Party (BDP)
Share:
Tayyip Erdogan is set to secure his place in history as Turkey’s first popularly-elected president on Sunday, but his tightening grip on power has polarized the nation, worried Western allies and raised fears of creeping authoritarianism.

Erdogan’s core supporters, religious conservatives, see his likely rise to the presidency as the crowning achievement of his drive to reshape Turkey. In a decade as prime minister, he has broken the hold of a secular elite that had dominated since Mustafa Kemal Ataturk founded the modern republic on the ruins of an Ottoman theocracy in 1923.

Opponents see him as a modern-day sultan whose roots in Islamist politics and intolerance of dissent are taking Turkey, a member of the NATO military alliance and European Union candidate, ever further from Ataturk’s secular ideals.

Erdogan could, aides have said, serve two presidential terms and rule to 2023, the 100th anniversary of the secular republic. Such symbolism is not lost on a leader whose passionate speeches are frequently laced with references to Ottoman history.

“On the assumption that Erdogan wins, what we’re going to have is the beginning of a new era,” said Marc Pierini, a former EU ambassador to Turkey and visiting scholar at the Carnegie Europe think tank.

Until now, Turkish presidents have been chosen by parliament but under a new law, the three candidates will face the national electorate as they compete for a five-year term.

Electoral rules ban the publication of opinion polls in the immediate run-up to the vote, but two surveys last month put Erdogan’s support on 55-56 percent. This is 20 points ahead of the main opposition candidate, Ekmeleddin Ihsanoglu, and enough to secure the simple majority needed to win in the first round.

Erdogan has made no secret of his ambition to change the constitution and establish an executive presidency; he has also made clear that in the meantime he will exercise the full powers of the post under Turkey’s existing laws.

They give him the authority to convene cabinet meetings, as well as appoint the prime minister and members of Turkey’s top judicial bodies, including the constitutional court and supreme council of judges.

“When a man like Erdogan becomes the first popularly-elected president, even if the constitution remains unchanged, it will mean Turkey has switched to a semi-presidential system,” said a senior official from his ruling AK Party. “Starting this Sunday, there will be a new system.”

Ihsanoglu, a diplomat and academic who was ran the Organisation of Islamic Cooperation for nine years, is campaigning for a different style of presidency, avoiding the kind of bombastic podium speeches that Erdogan has been delivering at mass rallies around the country.

“The people are fed up with this divisive rhetoric and mistakes. They are looking for a calm, dignified way of ruling,” Ihsanoglu told Reuters in an interview.

“Supremacy of law and justice have taken a big blow in Turkey. The new president should work very hard to help restore the independence and impartiality of the judiciary,” he said.

A strong Erdogan victory would mark an extraordinary recovery from one of his most difficult years in office. He has bounced back from anti-government demonstrations last summer, a corruption scandal months later and a power struggle with his former ally, U.S.-based cleric Fethullah Gulen.

Erdogan accuses Gulen, whose network of followers wield influence in the police and judiciary, of unleashing the graft scandal in a plot to oust him and has responded by purging institutions of those thought to be loyal to the cleric.

It is a battle he has vowed to pursue as president.

Timothy Ash, head of emerging markets research at Standard Bank in London, compares his tactical skills with those of past U.S. and British leaders.

“Never bet against Erdogan, as he is simply a brilliant political operator – a Turkish version of Bill Clinton or Tony Blair in terms of their ability to feel and shape the mood of a majority of the nation,” Ash said in a recent note.

Turkish financial markets would, he said, welcome a first round win as a sign of continuity. Since founding the AK Party in 2001, Erdogan has overseen unprecedented growth and stability after a long period of economic chaos and political drift.

But there are longer-term concerns about too sharp a concentration of power in the hands of a man whose views on the economy can be unorthodox – such as his conviction that high interest rates cause high inflation.

Erdogan’s reactions when threatened can appear impulsive and autocratic. From a heavy-handed police crackdown on the protests last summer, to bans on YouTube and Twitter or comments in recent weeks likening Israel’s offensive in Gaza to the actions of Hitler, Erdogan has drawn growing criticism in Western capitals and looked isolated internationally.

“His heart and his tongue are very closely connected. That has its costs sometimes, but nobody can accuse him of not saying what he believes,” said one official in Ankara.

Turkey ranked second to Russia last year in the number of judgments against it at the European Court of Human Rights. More than a quarter of the 108 rulings concerned violations of the right to liberty and security.

“An almighty presidency implies polarizing discourse, implies keeping the rule of law back … All of this is not EU- compatible,” Pierini said in a telephone briefing with journalists. “Despite all this, you have a Turkey which is heavily reliant on NATO for its security. It’s going to be a very difficult relationship.”

In the weeks following his likely victory, Erdogan will chair AK Party meetings for the last time and oversee selection of a new party leader, likely to be his future prime minister.

Under the constitution, Erdogan would have to break with the party once he is inaugurated on Aug. 28. It is therefore vital for him that a staunch loyalist heads the party he founded.

Should his influence over the party wane, Erdogan could struggle to force through the constitutional changes he wants to create an executive presidency, a reform which requires either a two thirds majority in parliament or a popular vote.

“Removing Erdogan from the post of prime minister and putting him in the position of president with a constitution he is unhappy with seems to be a recipe for instability,” said Sinan Ulgen, head of the Istanbul-based Centre for Economic and Foreign Policy Studies.

Senior AK officials say foreign minister Ahmet Davutoglu, who has strong support within the party bureaucracy and has been Erdogan’s right-hand man internationally, is the top choice to succeed him, although former transport minister Binali Yildirim is also trying to position himself for the job.

Davutoglu has declined to be drawn on his future but dismisses any concerns about Turkey’s stability.

“Democracy is the backbone of our success,” he told Reuters in an interview on Wednesday. “A popularly-elected president, a strong base of support for our party and a strong prime ministry, all these will motivate us … There shouldn’t be any worry about the future of Turkey.”