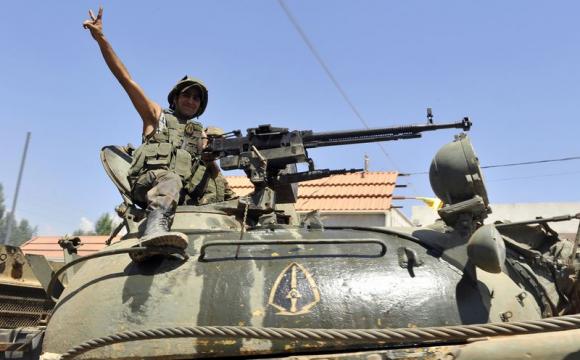 A Lebanese army soldier flashes a victory sign while riding on a tank as they advance towards the Sunni Muslim border town of Arsal, in eastern Bekaa Valley as part of reinforcements August 6, 2014. CREDIT: REUTERS/HASSAN ABDALLAH
Share:

After the Lebanese army retook control of the city of Arsal on Thursday, it started deploying  patrols throughout the city .

According to Lebanese media reports , the residents were so happy to see the army , they greeted the troops  with roses and sprinkled rice.

The “insurgents”  that were fighting with the Lebanese army represented a number of groups According to local and international media reports the majority of fighters belonged to the Al-Qaeda-affiliated Al-Nusra Front. The Lebanese military and security forces had been fighting Islamist militants from across the border since last weekend—this represented the first time that Islamic extremists from Syria were able to carry out a large-scale incursion into Lebanon, increasing Lebanese fears of spillover.

Many residents of Arsal left  their town during the clashes , while others were  stuck in neighborhoods turned into battlefields, according to reports.

There was reportedly  a steady stream of cars leaving Arsal, carrying families who are afraid of the escalation of clashes inside the town.

“Whoever is able to flee is not hesitating, but we cannot flee because the clashes are taking place just down the street,” Mohammad Hujeiri, a Lebanese resident of Arsal was quotes as saying  earlier this week