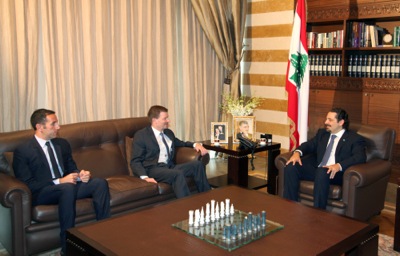 During the meeting, Hariri informed them of the grant donated by Saudi King Abdullah to the Army, saying there was ongoing contact to benefit from the grant to “meet the needs of the Army and security forces, and enable them to carry out their tasks, combat terrorism and strengthen security and stability.”

According to Hariri’s office, the meeting also focused on the assistance that can be provided by the countries in the support group to help Lebanon withstand the growing needs of the Syrian refugees and their host communities.

Hariri said he returned to oversee the spending of the Saudi grant that Riyadh announced earlier this week with the aim of supporting the Army to combat terrorism.

Hariri, who arrived in Beirut Friday, in a surprise return to the country after a little over three years of self-imposed exile due to security concerns, also met with Turkish Ambassador to Lebanon Inan Ozyildiz.

“It was a big pleasure to see … Hariri back in Beirut. I wanted to greet him and express our good wishes for his stay here. I think that his return will play a positive role in strengthening dialogue, stability and the armed forces,” the Turkish envoy said

According to LBC Hariri is no rush to meet Hezbollah chief Hassan Nasrallah, who was not among the callers .

Hariri sources were quoted telling LBCI: “There is no need for any meeting between the former PM and Hezbollah chief Nasrallah and we should take things one day at a time.”

“Hariri’s return will help us overcome crises given the regional situation.”he said