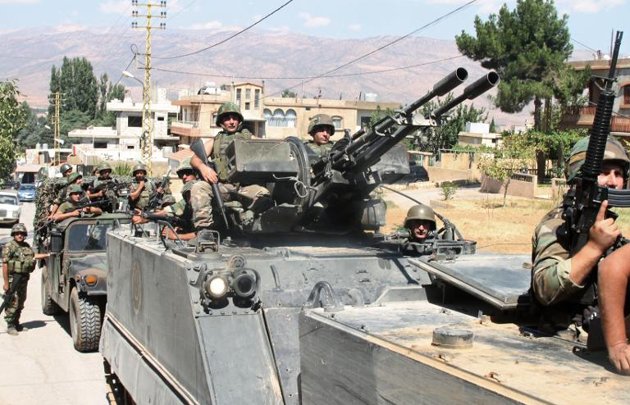 The Islamist Syrian gunmen who took part in the clashes with the army in the border town of Arsal have demanded the release of a number of their colleagues in the Roumieh Prison in exchange for the release of the 20 troops they abducted during the unrest, An Nahar newspaper reported on Saturday.

“It’s very simple, they will get their soldiers in exchange for the Islamist hostages,” one Islamist who was not identified by the daily was quoted as saying.

“This demand has been submitted to the Lebanese government and army”, the Islamist claimed, however a government source revealed that the cabinet did not receive any demand from the Islamists, according to An Nahar

Imad Jomaa, whose arrest last weekend sparked the clashes in Arsal is reportedly on top of the list

According to As Safir newspaper the gunmen who retreated to Syria from Arsal after intensified clashes with the Lebanese army have taken hostage more than 35 soldiers and policemen in an attempt to exchange them for Islamist prisoners, held at Roumieh prison’s Bloc B.

On Thursday, a delegation from the Muslim Scholars Committee tasked with mediating with the gunmen announced that it has lost contact with them.

The Lebanese army retook control of Arsal on Thursday after the Islamist gunmen from Syria withdrew back across the border, part of a ceasefire negotiated by Lebanon’s Association of Muslim Scholars. The latest developments in the eastern border town come as former Prime Minister Saad Hariri returned to Lebanon for the first time in three years following a self-imposed exile.

In comments to Asharq Al-Awsat, Arsal resident Mohamed Al-Hujairi confirmed that the Islamist gunmen have departed the town. “The Lebanese army has tightened its grip on all the security checkpoints inside and outside of the town, with the exception of one exit which was left open to allow the insurgents to withdraw towards the Syrian border.” He said.