Who are the Yazidis? Profile of Iraq’s misunderstood ‘devil worshippers’ 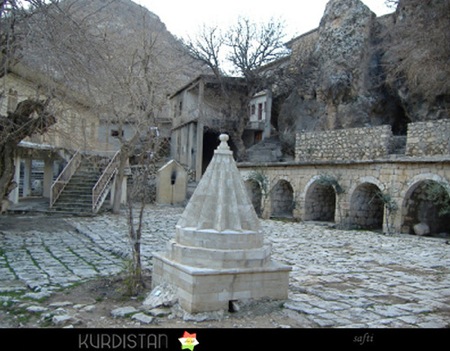 The 40,000 Iraqis stranded on a mountain and facing possible genocide at the hands of surrounding Islamic State fighters are the last surviving community in their ancestral homeland of the Yazidis, long misunderstood by the outside world as “Devil-worshippers”.

One of the most persecuted minorities in the Middle East, the Yazidis in fact find even the mention of the word “Satan” profoundly offensive, and have kept their ancient religion alive despite centuries of oppression.

The Yazidis mark themselves out as different. They never wear the colour blue. They are not allowed to eat lettuce. Many of the men wear their hair in long plaits that make them resemble nothing so much as Asterix and Obelix.

They believe one of their holy books, the Black Book, was stolen by the British in colonial times and is being kept somewhere in London.

But in their home town of Sinjar, from where they have now fled to the mountains above, they were welcoming in a way that belied their fearsome reputation as Satanists.

For ordinary Iraqis, they are bogeymen to frighten children with. But for religious extremists through the centuries, they have been Devil-worshippers to be slaughtered.

The misidentification came about because the Yazidis worship a fallen angel, the Malek Tawwus, or Peacock Angel. But, unlike Lucifer, the Yazidis’ fallen angel was forgiven by God and restored to heaven.

Their religion is not just an offshoot of Christianity or Islam. They do not believe in heaven or hell, but in reincarnation, which they describe as the soul “changing its clothes”.

They have kept their religion alive through the Talkers, men who are taught the entire text of their missing holy book by memory as children, and who in turn pass it on to their own sons.

The Yazidis once lived in a wide area, across Iraq, Syria, Turkey, Georgia and Armenia. But they have been driven from their homelands, and most have fled to Australia, Canada and Germany. Against all the odds, Iraq is the one place in the Middle East where a sizeable community remains.

The Yazidis speak Kurdish – they claim theirs is the ancient Kurdish religion – but they have a troubled history with their Kurdish neighbours too.

Their traditions make them highly visible as a separate community. The Yazidis do not practise arranged marriage, like other communities in the region. They have a formal system of elopement, where a man must “kidnap” his bride. If the woman is willing, the parents have to accept the match.

There are darker sides to the Yazidis. They have a tradition of killing any of their members who leave the religion, and 2007 it was reported that Du’a Khalil Aswad, a Yazidi woman, was stoned to death for converting to Islam and marrying a Muslim man.

The Yazidis say they have survived 72 genocides. Now there are fears the last community of them in the Middle East is facing another.