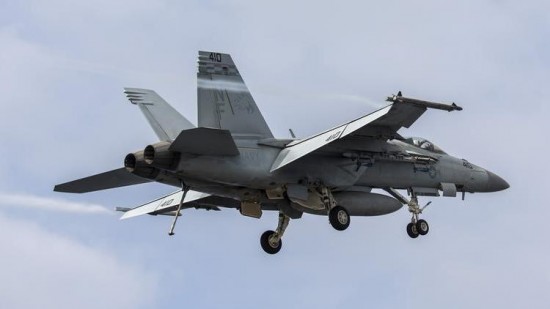 He said the Islamic rebels had been using the artillery to shell Kurdish forces defending Arbil where U.S. personnel are located.

“The decision to strike was made by the U.S. Central Command commander under authorization granted him by the commander in chief,” he said.

Earlier in the day, the U.S. began to drop relief supplies to beleaguered Yazidi refugees fleeing the Islamic State militants — also known as ISIS or ISIL.

President Francois Hollande said on Friday that France was ready to take part in action to end civilian suffering, and planned talks with international partners to that end.
“The international community cannot ignore the threat represented by the advance of this terrorist group for the local population, the stability not only of Iraq but of the whole region,” said Hollande in a statement.

Yazidis, ethnic Kurds who practice an ancient faith related to Zoroastrianism, are among a handful of pre-Islamic minority groups who survived for centuries in northern Iraq. They are believed to number in the hundreds of thousands, most living in Iraq, with small communities in the Caucasus and Europe.

Yazidis are regarded by the Islamic State as “devil worshippers” and risk being executed by militants seeking to establish an Islamic empire and redraw the Middle East map, uniting all Muslims under a banner of extremist Islamic law.

President Barack Obama said late Thursday evening he had authorized limited bombing to prevent “genocide” and blunt the onslaught of the Sunni radicals who have captured swathes of northern Iraq and advanced to a half hour drive from the Kurdish regional capital, Arbil.

It was the first time since the al-Qaeda offshoot began a lightning offensive in June, overrunning swathes of northern and western Iraq and declaring a “caliphate” in captured areas of Iraq and Syria, that the United States has opted for military action.

Deeply reluctant to engage U.S. forces in the Middle East again after costly wars in Iraq and Afghanistan, Obama said he had approved “targeted” use of air power to protect U.S. personnel if Islamic State militants advance further towards Arbil, seat of the Kurdistan regional government.

Reuters photographs on Thursday showed the insurgents had raised their black flag over a checkpoint just 28 miles from Arbil, bringing them closer than ever to the city of 1.5 million which is also the region’s economic capital.
‘Today, America is coming to help’

On Thursday, Obama said air strikes, which would be the first by the U.S. military in Iraq since its withdrawal in 2011, could also be used to support Iraqi and Kurdish forces trying to break the Islamists’ siege of Sinjar mountain, where tens of thousands of Yazidis have taken refuge.

“Earlier this week, one Iraqi in the area cried to the world, ‘There is no one coming to help’,” said Obama. “Well, today America is coming to help. We can act carefully and responsibly to prevent a potential act of genocide.”

“Please save us! SOS! save us! Our people are in the desert. They are exposed to a genocide,” said Yazidi lawmaker Mahma Khalil in Baghdad Thursday.

U.S. officials also announced an acceleration of military supplies to the Kurdish regional government, whose peshmerga forces have been routed by the Islamists as they seized control of a dozen towns and the country’s biggest dam in the last week.