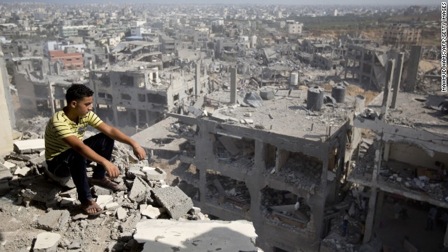 A Palestinian man looks out over destruction in the al-Tufah neighborhood of Gaza City, Gaza, on Wednesday, August 6, as a fragile 72-hour cease-fire between Israel and Hamas entered its second day. Israel launched a ground operation in Gaza on July 17 after a 10-day campaign of airstrikes had failed to halt relentless Hamas rocket fire on Israeli cities.
Share:
Rockets from Gaza hit Israel early Friday morning, breaching a cease-fire that had held for more than two days, the Israeli military said.

It wasn’t immediately clear how Israel would respond. The IDF pulled its ground forces out of Gaza on Tuesday but said they were maintaining “defensive positions” around the territory.

Earlier, negotiators in Cairo had been scrambling to extend the Gaza cease-fire, which was set to expire at 8 a.m. Friday (1 a.m. ET). A Hamas official had told supporters in Gaza City that the group was ready to resume fighting if it didn’t win key concessions in the talks.

“We are ready to return to the battle if the Palestinian demands are not met in Cairo,” Hamas spokesman Mosher al-Masry told a crowd of supporters waving the group’s green flags.Photos: Israel-Gaza crisis

RA spokesman for Hamas’ military wing, the Al-Qassam Brigades, was even more pointed.
“We demand from the negotiating team to pull out from negotiations if the enemy continues to be stubborn; we are ready for a long war,” Abu Obaida said on Hamas-run Al-Aqsa television.

“We demand that the negotiating team not extend negotiations without the agreement on a seaport,” he said, demanding that the blockade against Gaza be lifted, and all the crossings into Egypt and Israel be opened.

“We will not accept anything less,” the spokesman said. “We will make the tanks of the enemy a toy in the hands of the children of Gaza.”

As the spokesman suggested, Hamas wants Israel to end border restrictions that limit the flow of people and goods into and out of Gaza. Israel wants Hamas to give up its weapons.

Earlier, in a heated interview with CNN’s Chris Cuomo on “New Day,” Hamas spokesman Osama Hamdan said if the cease-fire was to hold, Israel must show signs of willingness to reach a broader deal before the truce expires.

Officials from Israel and the Palestinian side — including Hamas, Islamic Jihad and the Palestine Liberation Organization — are communicating through Egyptian intermediaries in an effort to reach agreement on extending the truce.

Hoping for a breakthrough

A Palestinian official said Thursday morning that there had been progress in the talks so far but declined to give any details.

“I am not sure how or when it will come, but we hope for a breakthrough,” said the official, who spoke on condition of anonymity because of the sensitivity of the talks.

The warring sides are far apart.
Israel says Hamas must disarm as part of any larger deal that might lead to the end of border restrictions and greater economic freedom for Gaza residents.

Hamas, meanwhile, says the blockade must end before a lasting peace deal can be reached. Israel must also stop activities in response to the kidnapping of three Israeli teens who were later found dead and facilitate reconstruction of the territory’s devastated infrastructure, Hamdan told CNN.

“We can’t talk about future while the Israelis are putting a pistol to our heads or a knife to our necks,” he said.

Gold told “New Day” that the border restrictions and Gaza’s economic and redevelopment needs can’t be separated because they are “intimately linked.”

“If you want cement for building homes or schools, you’ve got to make sure the cement goes there and not rebuilding attack tunnels that go into Israel,” he said.

“We’re of course concerned if something like that occurs, that the Iranians or others will bring missile boats into the Mediterranean and to that Gaza port,” Gold said. “So it’s not so simple as to say, ‘Give them a port.’ ”

On Thursday, the Palestinian Ministry of Health issued new casualty numbers for the conflict — 1,888 deaths, including 446 children, and 9,804 injured.

It’s unclear how many of the Palestinian dead were militants.

The United Nations has estimated that at least 70% of the dead were civilians. The Israel Defense Forces believes it killed about 900 militants — roughly half of the dead.

Additionally, about 65,000 Gaza residents lost their homes to the fighting, according to U.N. estimates.

Israel has come under growing international criticism over the number of civilian casualties, notably from the United Nations, which accused the Israeli military of shelling its shelters.

“The responsibility for this tragedy belongs with Hamas,” Netanyahu said.

Apparent evidence of the Israeli argument came with the release of video from France 24 and India’s NDTV that appears to show at least one rocket launcher located in a residential area. CNN reporters were blocked from reaching the area.

Maen Areikat, the PLO ambassador to the United States, sought to play down the significance of the launcher.

“We don’t know the circumstances of this particular rocket launcher,” he told CNN. “And if there has been incidents in which fighters from Palestinian factions fired at Israel from civilian populated centers, I think they were isolated centers. But to portray that this was the rule and not the exception is not a fair representation of what is happening in Gaza.”

“We challenge anyone to prove there were any rockets launched from civilian areas,” he said.

In fact, he said, Israel intentionally bombed civilians to punish Palestinians after strikes on rocket sites in open areas failed to achieve results.

“Israel is murdering innocent people on purpose,” he said.