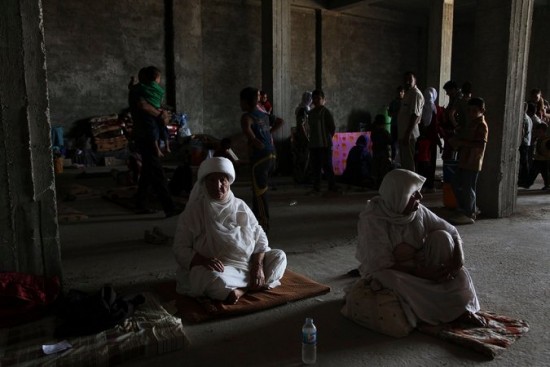 Displaced people from the minority Yazidi sect, fleeing the violence in the Iraqi town of Sinjar west of Mosul, took refuge on Thursday in Dohuk province. Credit Ari Jalal/Reuters
Share:

The crisis gripping Iraq escalated rapidly on Thursday with a re-energized Islamic State in Iraq and Syria storming new towns in the north and seizing a strategic dam as Iraq’s most formidable military force, the Kurdish pesh merga, was routed in the face of the onslaught.

The loss of the Mosul Dam, the largest in Iraq, to the insurgents was the most dramatic consequence of a militant offensive in the north, which has sent tens of thousands of refugees, many from the Yazidi minority, fleeing into a vast mountainous landscape.

In one captured town, Sinjar, ISIS executed dozens of Yazidi men, and kept the dead men’s wives for unmarried jihadi fighters. Panic on Thursday spread even to the Kurdish capital of Erbil, long considered a safe haven, with civilians flooding the airport in a futile attempt to buy tickets to Baghdad.

As chaos tore through northern Iraq, political intrigue unfolded in Baghdad, with political leaders meeting late into the night in the fortified Green Zone to choose a replacement for Prime Minister Nuri Kamal al-Maliki, a Shiite who has become an increasingly divisive figure.

American officials have worked to engineer his ouster, believing he is incapable of establishing a national unity government acceptable to Iraq’s main minority groups, Sunni Arabs and Kurds. American officials have implied that more military aid would be provided if Iraq’s political class chose a new leader.

As Iraqi leaders, the country’s top religious authorities and top Iranian officials, who wield considerable power within Iraq, pushed for Mr. Maliki’s removal, he was refusing to step aside Thursday night. Even those within his own State of Law bloc were demanding that he leave.

“Everyone is saying no to Maliki now,” said a member of Parliament from State of Law, who spoke on the condition of anonymity because of the delicate nature of the discussions. “He’s rejected by all parties.”

If he were to step down, Mr. Maliki has reportedly demanded immunity from prosecution for himself, his family and his inner circle, and a massive security detail, paid for by the state.

Given the number of enemies he has accrued over his time in power, and the well-documented instances of human rights abuses, torture and extrajudicial killings under his watch — not to mention wide-scale corruption at the highest levels of his government — many believe that Mr. Maliki would be immediately under threat of arrest, or assassination, were he to leave office without guarantees of immunity and protection.

“Maliki knows if he steps down, virtually he is a dead man,” said Ali Khedery, a former American official in Iraq, who over the years has advised five American ambassadors and several American generals and was once close to Mr. Maliki himself.

Adding to the sense that the country was rapidly coming apart, suicide attackers struck twice in Kadhimiya, a Shiite district in Baghdad that is home to an important shrine, killing nearly three dozen people. And in Kirkuk, a northern city long divided between Arabs and Kurds that is now under Kurdish control, two explosions struck near a Shiite mosque, killing 11 people and wounding more than 50 others.

After ISIS captured Mosul, Iraq’s second-largest city, on June 10, the militant group vowed to march on Baghdad. But its rapid advance south toward the capital stalled in the face of newly mobilized Shiite militias, and volunteer Shiite fighters determined to protect Iraq’s capital and the holy Shiite cities of Najaf and Karbala.

The Kurds had tried to seize on the chaos. protect their borders and consolidate their autonomy, while staying out of Iraq’s broader civil war. The pesh merga were considered well armed and well motivated, determined to protect their Kurdish enclave in the north.

But the latest fighting has shown that even the pesh merga are not up to the fight with ISIS. Kurdish officials have complained of a lack of ammunition and begged American diplomats for more weapons. But the United States, so far, has held off on significant arms shipments to the Kurds, fearing that it could undermine the central government in Baghdad.

Now, the Kurds have been battling a group of militants from ISIS who are using powerful American weapons they took from the battlefield, left by the Iraqi Army.

“They are literally outgunned by an ISIS that is fighting with hundreds of millions of dollars of U.S. military equipment seized from the Iraqi Army who abandoned it,” Mr. Khedery said.

In recent weeks, Mr. Khedery has become an outspoken critic of the Obama administration’s policy in Iraq, especially its past support for Mr. Maliki, and the American government’s lack of direct support to the Kurds.

Kurdish fighters have a long history of resistance to central governments in Iraq and Turkey, and among Kurds, a storied reputation as mountain fighters. But since the end of the first Persian Gulf war in 1991, after which they received years of air cover from the West in their enclave in northern Iraq, they have transitioned from resistance to standing security forces.

Kurdish forces have proven adept at providing local security in the Kurdish autonomous zones, but less capable at independent military operations. Their successes have often included Western support, including from the C.I.A. and the American Special Forces. But they are not trained, equipped or organized for large-scale independent operations, for integrating fire support into their ground operations, or for countering aggressive insurgent bombing campaigns.

The possibility that ISIS could take control of the Kurdish oil hub at Kirkuk, the key pumping point for the pipeline that runs from those…

Those deficiencies were apparent in fighting in recent days, as ISIS captured several towns over the weekend and continued its march north.

Atheel al-Nujaifi, the governor of Nineveh Province, whose capital is Mosul, said in a telephone interview after fleeing that ISIS secured the dam after what he called an “organized retreat” of the pesh merga.

In a statement issued on a social media account believed to belong to ISIS, the group claimed that it had captured the dam and vowed to continue its offensive northward as it consolidated control and continued to pursue its goal of establishing an Islamic caliphate that bridges the borders of Syria and Iraq.

The dam, on the Tigris River about 30 miles northwest of Mosul, provides electricity to Mosul and controls the water supply for a large area. A report published in 2007 by the United States government, which had been involved with work on the dam and spent nearly $30 million on repairs, warned that should it fail, a 65-foot wave of water would be unleashed across areas of northern Iraq.

Stuart W. Bowen Jr., the former special inspector general for Iraq reconstruction, who oversaw the 2007 report on the dam, said ISIS could certainly use the dam as a weapon of war, but that it could also use it as a means of finance, by extorting money in exchange for water or electricity.

ISIS has already used Iraq’s water supply as a weapon. Earlier this year it seized control of the Falluja Dam, in Anbar Province, and flooded a vast area that sent thousands of refugees fleeing, submerged hundreds of homes and several schools and interrupted the water supply to southern Iraq.

Ammar Jassim, a 35-year-old resident of Falluja, fled the city earlier this year not because of the fighting but because of the flooding. “We lost everything,” he said. “It was a water invasion.”

If the Mosul Dam were to be damaged, “it would be like a tsunami coming down the Tigris,” said Azzam Alwash, a prominent environmentalist and engineer and the founder of Nature Iraq, a nonprofit group.

ISIS is also battling for control of the Haditha Dam, Iraq’s second largest, which is also in Anbar Province. As of Thursday, the dam was still under the control of the Iraqi security forces and allied tribal fighters.