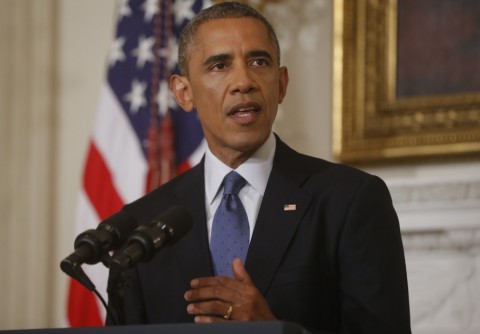 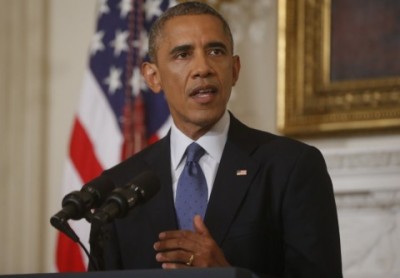 President Obama said Thursday he has authorized “targeted” air strikes if necessary to protect American interests in Iraq from insurgent forces that are taking over the country’s northern cities.

If the terrorist group ISIS reaches Erbil, the president said he will call in U.S. air strikes. The U.S. has an embassy and other staffers in the city. Air strikes have also been authorized to protect families fleeing ISIS in the Sinjar Mountains.

“These innocent families are faced with a choice: descend and be slaughtered or stay and slowly die of hunger,” he said.

“As commander in chief, I will not allow the United States to be drawn into fighting another war in Iraq,” Obama said.

The announcements marked the deepest American engagement in Iraq since U.S. troops withdrew in late 2011 after nearly a decade of war.

An air drop of food, water and medicine made at the request of the Iraqi government has been completed, the president said in the statement from the White House.

U.S. aircraft, escorted by fighter jets, dropped 5,300 gallons of fresh drinking water and 8,000 meals ready to eat. The aircraft were over the drop area for less than 15 minutes flying at a low altitude, the U.S. Central Command said in a statement.

The emergency effort is being deployed to help a group of 40,000 Yazidis, a group of ethnic Kurds, who fled villages in northern Iraq under threat from ISIS.

The Yazidis fled to the Sinjar Mountains, in a remote part of northern Iraq near the border of Syria, where they are stuck without food or water while ISIS forces are gathered at the base of the mountains.

ISIS has overtaken much of the northern part of Iraq, including the city of Mosul, over the past two months. They are simultaneously waging campaigns for territory in Syria and Lebanon in their quest to create a unified Islamic state encompassing territory from all three countries.

The Iraqi government has had little success battling ISIS.

In a statement, Secretary of Defense Chuck Hagel said a solution to the threat posed by ISIS “will require further reconciliation among Iraqi communities and strengthened Iraqi security forces.”

“Department of Defense personnel in Iraq therefore continue to assess opportunities to help train, advise, and assist Iraqi forces, and will provide increased support once Iraq has formed a new government,” he said.