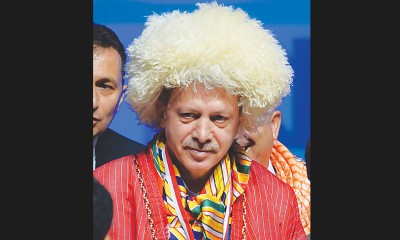 Turkish Prime Minister Recep Tayyip Erdogan on Wednesday faced accusations of racism days before he stands in presidential elections after saying in a television interview that it was ugly to be called an Armenian.

During a live interview on the private NTV channel late Tuesday, Erdogan complained that the opposition was carrying out a smear campaign against him by claiming that he was from another ethnic origin.

“As far as I have learned from my father and grandfather, I am a Turk,” he added.

His comment that it was ugly to be called an Armenian drew anger on social media, further inflaming tensions days ahead of Sunday’s presidential election where Erdogan is hot favourite to become head of state.

“Excuse me, but please go and become the president of another country,” wrote prominent Turkish-Armenian columnist Hayko Bagdat in an angry response to Erdogan.

Melda Onur, lawmaker from the Republican People’s Party (CHP), asked: “Is there any ethnic group who could escape Erdogan’s hate speech?”

Even a senior lawmaker from the ultra right-wing Nationalist Movement Party (MHP) — usually not a natural friend of Turkey’s Armenians — came to their defence.

“We have news for Erdogan from the 21th century: Being an Armenian is not a crime, a fault, an ugly, an embarassing or a sinful thing…. But his words amount to hate crime according to our laws,” Tugrul Turkes said in a written statement.

Critics accused Erdogan of playing the sectarian and the ethnic card in the run-up to the presidential elections.

“Is it ugly to be an Armenian or is it a shame? Please explain now!” demanded Nevsin Mengu, an anchorwoman at the private CNN-Turk television.

Turkey’s Armenian minority — the remnants of a much greater community that lived during the Ottoman Empire — numbers around 70,000 people, most of them living in Istanbul.

They often complain of being considered second-class citizens in a country where “Armenian” is often considered a curse.

Armenians say up to 1.5 million of their forebears were killed in a 1915-1916 genocide by Turkey’s former Ottoman Empire. Turkey says 500,000 died of fighting and starvation during World War I and categorically rejects the term genocide.

Erdogan in April expressed his condolences over the World War I massacres of Armenians, which he called “our shared pain”, but his overture was brushed aside by Yerevan.

Erdogan’s supporters are largely ethnic Turkish Sunni Muslims, who are the overwhelming majority community in Turkey.

During an election rally last weekend, the 61-year-old premier urged the CHP leader Kemal Kilicdaroglu to make clear he belongs to the country’s minority Alevi community, an offshoot of Shia Islam.

“Kilicdaroglu, you can be an Alevi. I respect you. Don’t be afraid to say it. I am Sunni and can say it without fear. There is no need to deceive people,” he said.

Aytun Ciray, lawmaker and the deputy head of the CHP, called Erdogan a “very dangerous leader” with a “sick state of mind” and suggested that he showed symptoms of “Mad Leader Disease”.

Erdogan also said his presidential election rival Selahattin Demirtas — who represents a Kurdish party — was actually a Zaza, an ethnic group living in southeast Turkey who often consider themselves as Kurds.

The premier meanwhile has repeatedly called his other election rival Ekmeleddin Ihsanoglu — the Egypt-born former head of the Organisation of Islamic Cooperation — “the Eyptian”.

“Yes, Kilicdaroglu is an Alevi, Demirtas is a Zaza, Ihsanoglu is Eyptian and you are a thief!”, the left-leaning BirGun newspaper headlined on Sunday, referring to the corruption allegations against Erdogan and his inner circle.