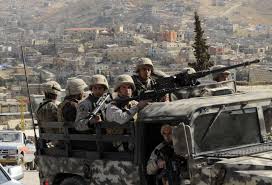 Share:
Islamic State militants extended their gains in northern Iraq on Thursday, seizing more towns and strengthening a foothold near the Kurdish region in an offensive that has alarmed the Baghdad government and regional powers.

The advance forced thousands of residents of Iraq’s biggest Christian town to flee, fearing they would be subjected to the demands the Sunni militants made in other captured areas – leave, convert to Islam or face death.

The Islamic State, which is considered more extreme than al- Qaeda, sees Iraq’s majority Shi’ites and minorities such as Christians and Yazidis, a Kurdish ethno-religious community, as infidels.

The militant group said in a statement on its Twitter account that its fighters had seized 15 towns, the strategic Mosul dam on the Tigris River and a military base in an offensive that began at the weekend and would continue.

On Thursday, two witnesses told Reuters by telephone that Islamic State fighters had hoisted the group’s black flag over the dam, which could allow the militants to flood major cities or cut off significant water supplies and electricity.

The Sunni militants inflicted a humiliating defeat on Kurdish forces in the weekend sweep, prompting tens of thousands from the ancient Yazidi community to flee the town of Sinjar for surrounding mountains.

Some of the many thousands trapped by Islamic State fighters on Sinjar mountain have been rescued in the past 24 hours, a spokesman for the U.N. Office for the Coordination of Humanitarian Affairs said, adding that 200,000 had fled the fighting.

“This is a tragedy of immense proportions, impacting the lives of hundreds of thousands of people,” spokesman David Swanson said by telephone.

Many of the displaced people urgently need water, food, shelter and medicine, he said. A spokesman for the U.N. agency for children said many of the children on the mountain were suffering from dehydration and at least 40 had died.

Yazidis, seen by the Islamic State as “devil worshipers”, risk being executed by the Sunni militants seeking to establish an Islamic empire and redraw the map of the Middle East.

Gains by the Islamic State have raised concerns that militants across the Arab world will follow their cue. The Sunni militants have fought in Lebanon.

The Islamic State, which has declared a caliphate in areas of Iraq and Syria it controls, clashed with Kurdish forces on Wednesday in the town of Makhmur near Arbil, the capital of the Kurdish autonomous zone.

Witnesses said the militants had seized Makhmur, but Kurdish officials told local media their forces remained in control there and television channels broadcast footage of peshmerga fighters driving around the town.

The mainly Christian town of Tilkaif, as well as Al Kwair, were overrun by militants, according to witnesses.

The Islamic State poses the biggest threat to Iraq’s integrity since the fall of Saddam Hussein in 2003. Its fighters and their Sunni allies also control a big chunk of western Iraq.

The group has deepened sectarian tensions, pushing the country back to the dark days of a civil war which peaked in 2006-2007 under U.S.-led occupation.

Bombings, kidnappings and executions are routine once again in Iraq, an OPEC member. Religious and ethnic minorities that have lived in the plains of the northern province of Nineveh are particularly vulnerable.

Sunni militants have been purging Shi’ite Muslims of the Shabak and ethnic Turkmen minorities from towns and villages in Nineveh, and last month set a deadline for Christians to leave the provincial capital Mosul or be killed.

The death toll from car bombings in crowded markets in Shi’ite areas of Baghdad climbed overnight to 59, with 125 wounded, security and medical sources said.

The Islamic State’s gains have prompted Iraqi Prime Minister Nuri al-Maliki, a Shi’ite, to order his air force to help the Kurds, whose reputation as fearsome warriors was called into question by their defeat.

There were several air force strikes on Wednesday, including one the government said killed 60 “terrorists” in Mosul, but they did not appear to have broken the Islamic State’s momentum.

The militants’ capture of the town of Sinjar, ancestral home of the Yazidi ethnic minority, prompted tens of thousands of people to flee to surrounding mountains, where they are at risk of starvation.

The Islamic State sees the Yazidis, followers of an ancient religion derived from Zoroastrianism, as “devil worshippers”. They are spread across a large area of northern Iraq and are part of the country’s Kurdish minority.

Many of their villages were destroyed when Saddam Hussein’s troops tried to crush the Kurds. Some were taken away by the executed former dictator’s intelligence agents.

Now they are on the defensive again.

Maliki has been serving in a caretaker capacity since an inconclusive election in April.

He has defied calls by Kurds, Sunnis, fellow Shi’ites and regional power broker Iran to give up his bid for a third term and make room for a less polarising figure that can unite Iraqis against the Islamic State.

But Maliki, an unknown when he first took office with considerable U.S. support in 2006, remains defiant, warning that any interference in the process of choosing a new prime minister would open the “gates of hell” in Iraq.