France to speed arms delivery to Lebanon as violence continues 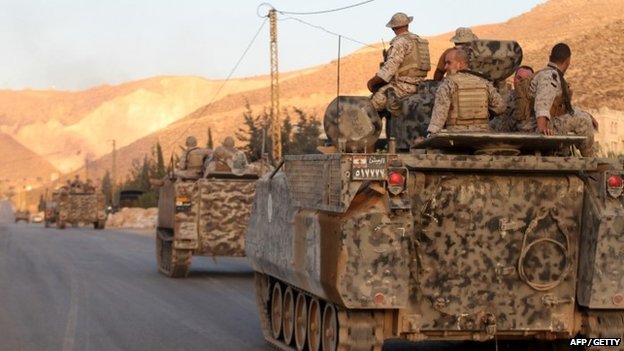 The Lebanese army sent reinforcements to Arsal, where Sunni Muslim support for the uprising across the border in Syria is strong
Share:
France says that it is to speed up the delivery of weapons to the Lebanese army, in response to the rising violence in the country.

In the latest clash, gunmen opened fire on a bus carrying soldiers in the city of Tripoli, the army said.

Meanwhile on the border with Syria two Lebanese soldiers have reportedly been killed, as fighting with Syrian rebels continues for a fourth day.

A young girl has also been shot dead, after clashes spread.

The fighting on the border began on Saturday when Syrian rebels raided Arsal, a mainly Sunni Lebanese town.

The rebels objected to the detention by Lebanese forces of an alleged member of Syria’s Islamist militant group al-Nusra Front.

At least 15 soldiers have been killed in the area since the weekend.

In December, Saudi Arabia pledged to spend $3bn (£1.7bn) on French military equipment and weapons for Lebanon’s army. The Lebanese Armed Forces (LAF), have long complained of being underfunded in a country rife with well-equipped militias.

The French Deputy Foreign Ministry spokesman Vincent Floreani said on Tuesday that France is “…fully committed to supporting the Lebanese army, a pillar of stability and unity in Lebanon.”

Fighting spreads north
The district around Arsal, in the north of the Bekaa valley, is known for continuing tension between the Lebanese army and Syrian militias.

Army units were trying to recapture the courthouse in Arsal from the rebels, as well as the area surrounding a customs building, the Lebanese National News Agency reported.

On Monday night, fighting broke out in Tripoli. The northern port city is divided between a Sunni population and the minority Shia Alawite community which supports Syrian President Bashar al-Assad.

Reports say firing erupted after a demonstration against the army’s handling of the situation in Arsal. Another spark is thought to have been reports that a number of Sunni clerics were wounded as they entered Arsal to try to broker a ceasefire.

The young girl was reported killed when a bullet hit her in the head in exchanges with gunmen around Lebanese army positions in Tripoli.