UN urges Lebanon to stay out of the conflict in Syria 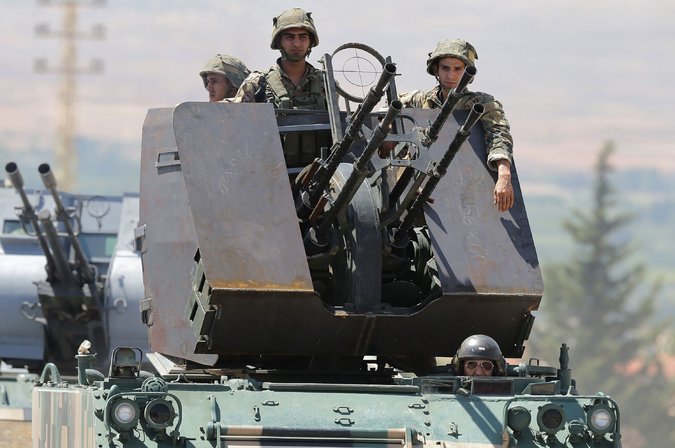 Lebanese soldiers on Monday driving into Arsal, where battles with Islamists continued and thousands of residents had fled. Credit Joseph Eid/Agence France-Presse — Getty Images
Share:
The UN Security Council has backed Lebanon’s military action against extremist groups but urged it to stay out of the conflict in neighbouring Syria, as Beirut vowed no leniency for the “terrorist killers”.

Twenty-two Lebanese soldiers were missing, possibly taken hostage, the army announced, and a military source said 16 others had been killed since the clashes with jihadists erupted on Saturday near the Syrian border.

The United Nations Security Council on Monday called on Lebanese politicians to “preserve national unity” and “refrain from any involvement in the Syrian crisis”.

The 15-member Council “expressed support for the Lebanese Armed Forces and the Internal Security Forces in their fight against terrorism”.

Analysts said the violence could be contained in the short-term, but warned an aggressive military response could stoke tensions and worsen the clashes, which have also killed three civilians.

On Monday, the army deployed reinforcements and fired mortar rounds at militant positions in the mountains around the eastern border town of Arsal, saying it was advancing.

“We didn’t sleep all night because of the fighting,” said Ahmed Hujairi, 55, who left with his family.

“The armed men are not letting anyone else leave. They fired over our heads to stop us,” he added.

The gunmen were from different countries, dressed in black and were “very well-organised”.Prime Minister Tammam Salam pledged there would be “no leniency towards the terrorist killers and no appeasement for those who violate Lebanon’s territory and harm its people”.

In a statement after a cabinet meeting, he also urged France to speed up delivery of weapons for the Lebanese army being purchased under a $3 billion deal financed by Saudi Arabia.

A third civilian was shot dead by a sniper on Sunday.

The clashes are the latest evidence of how Syria’s conflict, which began with protests against President Bashar al-Assad in March 2011, has afflicted Lebanon.

Despite officially distancing itself from the war, Lebanon’s existing sectarian and political tensions have been worsened by the conflict next door.

It is also hosting more than one million Syrian refugees, who have tested its limited resources and the patience of its four million citizens.

And Hezbollah, the powerful Lebanese Shiite movement, has openly intervened in the Syrian conflict, dispatching fighters to bolster regime troops against the Sunni-dominated uprising. Majority-Sunni Arsal is broadly sympathetic to the uprising against Assad’s regime, and has regularly been bombed by Syrian regime forces who say that they are targeting opposition fighters holed up in the area.The fighting has raised new concerns about the effects of the Syrian conflict on fragile Lebanon, which fought a brutal 1975-1990 civil war.

Emile Hokayem, a senior fellow for regional security at the International Institute for Strategic Studies, said the situation in Arsal was an inevitable “spillover” from the Syrian conflict.

“As much as the Lebanese like to think that Syria’s problems are coming to Lebanon, the reality is that Lebanon sent fighters for and against Assad to Syria… so we shouldn’t be surprised that it’s coming here.”

He said the situation in Arsal could be contained in the short-term, but warned an aggressive army response or the involvement of Hezbollah would anger Lebanon’s Sunnis.

Many of Lebanon’s Sunni Muslims resent Hezbollah’s outsized military power, and have been angered by its role in Syria.

But the movement says it is fighting in Syria to prevent militants from groups like Al-Nusra and the jihadist Islamic State threatening Lebanon.

The UN refugee agency said it was making plans to deliver aid to Syrian and Lebanese civilians affected by the fighting if needed.

A UN official said there was scant information on the status of tens of thousands of refugees in Arsal, though there were reports shelling had started a fire at one tented encampment, prompting refugees to shelter in nearby buildings.