Hezbollah and Iranian Revolutionary guard flags . Both bare a hand holding up a rifle and a globe
Share: 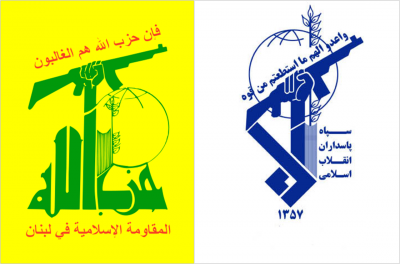 In early July, hundreds of mourners gathered for the funeral of Kamal Shirkhani in Lavasan, a small town northeast of the Iranian capital Tehran. The crowd carried the coffin past posters which showed Shirkhani in the green uniform of the elite Islamic Revolutionary Guard Corps and identified him as a colonel.

Shirkhani did not die in a battle inside Iran. He was killed nearly a hundred miles away from the Iranian border in a mortar attack by the militants of the Islamic State “while carrying out his mission to defend” a revered Shiite shrine in the city of Samarra, according to a report on Basij Press, a news site affiliated with the Basij militia which is overseen by the Revolutionary Guards.

Shirkhani’s death deep inside Iraq shows that Iran has committed boots on the ground to defend Iraqi territory.

At least two other members of the Guards have also been killed in Iraq since mid-June, a clear sign that Shi’ite power Iran has ramped up its military presence in Iraq to counter the threat of Sunni fighters from the Islamic State, an al Qaeda offshoot that seized much of northern Iraq since June.

Iraqi security forces largely dissolved in the path of the Islamic State’s advance on Baghdad, proving that the Shi’ite-led government could hardly defend itself.

In late June, a spokesman for the militant group, formerly known as the Islamic State in Iraq and the Levant, announced that it was shortening its name to the Islamic State and would rule its territory as a Sunni Muslim caliphate overseen by its leader Abu Bakr al-Baghdadi.

The Islamic State considers Shi’ites to be heretics deserving of death, and made a point of filming its fighters gunning down Shi’ite prisoners as it advanced. Iranian and Iraqi Shi’ites see it as an existential threat.

Iran, with deep ties both to the Iraqi government and to a number of Iraqi Shiite militias, stepped in to stop it.

Senior Iranian officials have denied that any Revolutionary Guard fighters or commanders are inside Iraq. But there’s no doubt that prominent politicians and clerics in Iran have been rattled by the rapid gains of the Islamic State and the threat it poses, not only to the Iraqi government but to Iran itself.

Iranian president Hassan Rouhani pledged his government’s support to help counter the threat posed by the Islamic State if the Iraqi government requested it.

In late June, a senior Iranian cleric, Ayatollah Nasser Makarem Shirazi, said in a statement that waging jihad to defend all of Iraq, particularly holy shrines that are visited each year by millions of Shi’ite pilgrims, is “obligatory,” according to a report from the semi-official Fars News agency.

Samarra, a city on the Tigris north of Baghdad where Colonel Shirkhani was killed, is site of the first of those major Shi’ite shrines to land in the path of the Sunni fighters’ advance. Iraqi government forces and Shi’ite militia swiftly mobilised and have so far succeeded in defending it. The deaths of Shirkhani and two others is proof that Iranians were part of that successful response.

Qassem Soleimani, the head of the external operations branch of the Guards known as the Quds Force, recently travelled to Baghdad, according to reports from a number of Iranian news sites. An Iraqi parliamentarian posted a picture on the Internet of himself with Soleimani in Iraq in mid-June.

Regional experts believe the Revolutionary Guards have increased the supply of weapons and funds to proxy militant groups inside Iraq in recent weeks.

The Islamic State’s rise was partly Iran’s fault for doing too little to rein in the sectarian impulses of its ally Maliki, said Reza Marashi, a former Iran desk officer at the U.S. State Department who is now the director of research for the National Iranian American Council.

“Iran overplayed its hand. They overreached,” he said. “By seeking to advance its interests with its Iraqi allies at the expense of other foreign and domestic players, look at what’s happened: the Maliki government helped give rise to ISIS.”

Throughout the U.S. occupation of Iraq, which ended in 2011, Washington accused Tehran of funding, arming and training Shi’ite militant proxy groups behind some of the deadliest attacks against U.S. troops and revenge killings of Sunnis. Those militia groups have re-emerged in recent months to join the fight against Sunni fighters.

A high-level Iraqi security official who asked not to be identified because he was not authorised to speak to the media said Iran had now mobilised up to 20,000 Iraqi militiamen from groups it funded and trained.

The fighters are spread south from Samarra to Baghdad and down into the farming communities south of the capital, the official added.

Several thousand Iraqi fighters were also brought back from Syria where they were helping defend the government of president Bashar al-Assad, the same official said. Some have now joined units of security forces from the Iraqi Ministry of Interior and Ministry of Defence. Some of the groups were deployed since the spring with the blessing of Maliki, and put under a military chain of command, as the Iraqi security forces first struggled fighting in western Iraq and in Baghdad’s rural hinterlands.

In addition, there are dozens of members of Lebanon’s Shi’ite militia Hezbollah in Iraq, sources familiar with the group say. Hezbollah militants have been fighting in Syria to support Assad for more than two years. Their presence in Iraq now is a sign of the broader regional dimensions of the conflict which has pitted Shi’ite Muslims against Sunnis.

Unlike the fighters in Syria, the Hezbollah militants in Iraq are battle-hardened veterans leading and supervising operations, sources familiar with the group say. One Hezbollah commander, a veteran of the 2006 war between Hezbollah and Israel named Ibrahim al Haj, was killed near Mosul recently.

The presence of the Iranian Guards in Iraq also comes after months of committed military support from the Quds Force in Syria. Senior Iranian officials had denied Guard personnel were there until websites linked to the Guards and Basij began publishing pictures and posting video of the funerals of Iranian fighters killed in Syria.

Still, it was more than a year after the beginning of the Syrian conflict before reports of the first Guardsman killed there began to circulate on the web. In comparison, the three Guardsmen killed in Iraq since mid-June appear to indicate that the Guards have leapt more quickly into the fight in Iraq.

Aside from Shirkhani, the funeral for a second Guardsman killed in Samarra, Shojaat Alamdari Mourjani, was held in the southern city of Shiraz on July 4th. Mourjani, a pilot, “reached martyrdom while defending the shrine in Samarra,” according to a report from the Islamic Republic News Agency (IRNA).

The IRNA report does not give any further details whether Mourjani was killed in ground combat or while flying a combat mission. Pictures published by the Fars News agency show posters pasted on Mourjani’s casket with him wearing the uniform of the Revolutionary Guards and identifying him as a colonel.

Only a couple of days before Mourjani’s funeral, the London-based International Institute for Strategic Studies published a report that Iran had delivered a handful of SU-25 ground attack aircraft to Iraq. The report notes that the only SU-25 aircraft owned by Iran are operated by the IRGC and that, “these aircraft were likely delivered to Iraq by Iranian pilots” but it is unclear who would be operating the aircraft once in Iraq.

The death of a third Guardsman, Ali Reza Moshajari, was reported by the Hengam News site in mid-June. The report, citing a Lebanese news source, included pictures of Moshajari in Revolutionary Guard uniform and noted that he had been killed in Kerbala while defending holy sites there, southwest of Baghdad.

Unlike in Samarra, there has not been sustained fighting around mainly Shi’ite Kerbala, although there have been occasional attacks in the area. The report, which also included a photo of Moshajari’s bloodied face framed by a white burial shroud, does not present any more details of the circumstances of Moshajari’s death. His funeral was attended by prominent Guardsmen, including Hussein Allah Karam, a former Guard commander who helped found a radical militant group, according to Hengam News.

Unlike in Syria, where Iran has staunchly defended Assad, a member of the Shi’ite offshoot Alawite sect fighting mainly Sunni opponents, Washington and other Western capitals hope Tehran will use its leverage in Iraq to help push for a more inclusive government in Baghdad to help defuse the crisis.

“The Iranians have seemingly calculated that they cannot preserve their interests in Syria without Bashar Assad, They have not made those same calculations about Maliki,” Karim Sadjadpour, an Iran analyst with the Carnegie Endowment for International Peace, wrote in an email.

“But the question is whether there exists a unifying alternative to Maliki, an Iraqi politician who’s both a steadfast Iranian ally and still palatable to Iraqi Sunnis and Kurds.”