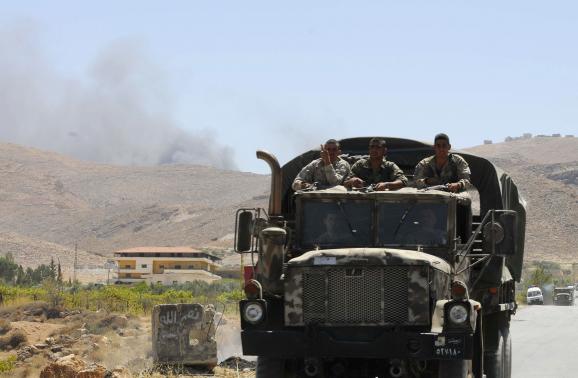 Lebanese army soldiers ride on a military pick-up truck at the entrance of the Sunni Muslim border town of Arsal, in eastern Bekaa Valley, as smoke rises in the background during clashes between Lebanese army soldiers and Islamist militants August 4, 2014. REUTERS/Hassan Abdallah
Share:
Beirut, Lebanon- The Lebanese army advanced on Monday into a border town attacked by Islamists at the weekend in the most serious spillover of the three-year-old Syrian civil war into Lebanon, and the Beirut government said the deadly assault would not go unpunished.

With army reinforcements arriving in Arsal, Prime Minister Tammam Salam, a Sunni Muslim, said there could be no political deal with gunmen identified as members of the Nusra Front and the Islamic State, which has seized parts of Syria and Iraq.

“The only solution proposed today is the withdrawal of the militants from Arsal and its environs,” said Salam, the most senior Sunni in the Lebanese government.

Flanked by the rest of the cabinet, Salam accused the militants of seeking to “move their sick practices to Lebanon”.

“We confirm that the attack on Lebanese national dignity will not go unpunished,” he said.

Lebanon, still rebuilding from its own 1975-1990 civil war, has been buffeted by violence linked to the Syrian conflict, including rocket attacks, suicide bombings and gun battles.

But this was the first major incursion by hardline Sunni militants who have become leading players in Sunni-Shi’ite violence that has unfolded across the Levant, destabilising Lebanon by inflaming its own sectarian tensions.

The army said 14 soldiers had been killed, with 22 others missing and 86 injured in the fighting, which erupted after security forces arrested a Syrian Islamist rebel commander, Emad Jumaa, on Saturday.

Soldiers advancing into Arsal found the bodies of 50 militants, a security official said. A cleric in Arsal said at least 50 civilians were dead and more were buried in rubble.

More than a dozen other members of the security forces have been taken hostage. The army described the Islamists’ incursion as a long-planned attack. Local politicians say it marks an attempt to extend the Islamic State’s footprint into Lebanon.

Rebels said dozens of fighters from Syria’s Qalamoun area just across the border had moved to Arsal on Sunday to reinforce gunmen there. Syrian warplanes repeatedly struck the nearby mountainous border area used by the militants to access Arsal.

The militants have been beaten back in the border area in the past year by Syrian government forces backed by Hezbollah, the Lebanese Shi’ite Muslim political and military movement. Some 3,000 fighters are estimated to be in the border zone.

Indicating that Iranian-backed Hezbollah stood ready to help the army, one of its senior clerics said the military would not be left on its own and urged people in areas near the clashes to be prepared to “confront the bats of the dark night”.

Hezbollah forces have deployed near Arsal, and Syrian activists say they are already involved in the fighting. The group has not announced any role. Analysts believe Hezbollah would keep quiet about any involvement to avoid further inflaming sectarian tensions.

“To those who would threaten to divide the army and leave it, we say: Lebanon and the Bekaa are not Mosul,” said Mohamed Yazbek, the Hezbollah cleric, in comments reported by Hezbollah’s al-Manar website, referring to a northern Iraqi city overrun by Islamic State militants in June.

Thick plumes of black and grey smoke billowed from the tops of the hills where Arsal lies. Intermittent bursts of gunfire could be heard from the surrounding areas as troops moved in.

A dozen armoured personnel carriers were seen advancing towards the town, together with a similar number of other military vehicles including trucks and Humvees. Soldiers armed with assault rifles and rocket-propelled grenades sat atop the vehicles as they moved along the main road towards Arsal.

Video footage released by the army showed seven bodies of men purported to be militants, as well as about two dozen men kneeling with their hands bound against a wall, and rifles, ID cards and cell phones said to be seized from the gunmen.

Arsal is a mainly Sunni town located on the Lebanese side of the border between Syrian government-controlled territory and Lebanese Shi’ite areas sympathetic to Hezbollah.

More than 100,000 Syrian refugees are estimated to be living in and around Arsal in camps that Syrian activists said had been badly damaged and evacuated during the fighting.

“There is no place of refuge for the refugees,” said one Syrian activist in the area reached by text message.

“The residents are terrified.”

Two army trucks were seen bringing several dozen civilians including women in headscarves and young children out of Arsal.

“What are we expecting? Our houses are being destroyed. God knows if our families are alive and well or dying,” said Mohamed al-Fleti, a 25-year-old Lebanese man from Arsal as he sat in the shade of a tree by a gas station down the road from Arsal.

The war in Syria has deepened rifts between Shi’ite Lebanese allied to the government of Syrian President Bashar al-Assad and Sunnis who have mostly been supportive of the uprising against him. Political divisions have left Lebanon without a president since May.

“THEY HAVE NO CHOICE BUT TO WITHDRAW”

Salam said the government, drawn from across the political spectrum, stood behind the army. He said he had asked France to speed the delivery of weapons due to be supplied in a Saudi-financed deal.

“The government has decided to mobilise all official Lebanese institutions and apparatus to defend our country.”

“They have no choice but to withdraw from the town, and neither the state, nor we, will stand idle in the face of the plots of these groups,” Hariri, who is backed by Saudi Arabia, said in comments to the London-based Al-Hayat newspaper.

But despite wide backing for the army among politicians, Lebanon’s Muslim Clerics Association urged Sunnis to protest until the army halted its bombardment of Arsal.

Its demands, published in a statement, included the opening of “a secure humanitarian corridor to Arsal”.

Mustafa al-Hujairi, a leading Sunni cleric in Arsal, blamed deaths in Arsal on Hezbollah. He said matters were now in the hands of the gunmen.

“Hezbollah want to turn Arsal to rubble like they did to Qusair,” he said, referring to a town in Syria that Hezbollah helped Syrian government forces capture from rebels last year.