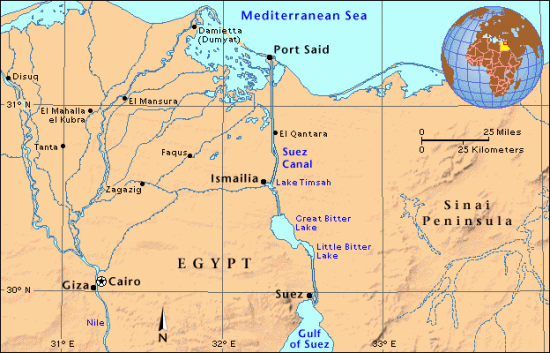 Egypt said on Tuesday it plans to build a new Suez Canal alongside the existing 145-year-old historic waterway in a multi-billion dollar project to expand trade along the fastest shipping route between Europe and Asia.

The project, to be run by the army, is a major step by new President Abdel Fattah al-Sisi to stimulate Egypt’s struggling economy and recalled some of the grand national programmes of one of Sisi’s predecessors, army strongman Gamal Abdel Nasser.

The Suez Canal earns Egypt about $5 billion a year, a vital source of hard currency for a country that has suffered a slump in tourism and foreign investment since the 2011 uprising that preceded Mursi’s presidency.

An official in the Suez Canal Authority told Reuters the new canal was set to boost annual revenues to $13.5 billion by 2023.

The new channel, part of a larger project to expand port and shipping facilities around the canal, aims to raise Egypt’s international profile and establish it as a major trade hub.

“This giant project will be the creation of a new Suez Canal parallel to the current channel of a total length of 72 kilometres (44.74 miles),” Mohab Mamish, authority chairman, told a conference in Ismailia, a port city on the canal.

He said the total estimated cost of drilling the new channel would be about $4 billion and be completed in five years, though Sisi said he hoped it would be finished within a more ambitious one-year deadline.

The original canal, linking the Mediterranean and Red Seas, took 10 years of brutal, poorly paid work by Egyptians, drafted at the rate of 20,000 every 10 months from “the peasantry”.

It slashed weeks if not months off journeys between Europe and Asia that otherwise necessitated a trip round Africa.

Sisi said the armed forces would be in charge of the new project for security reasons. Up to 20 Egyptian firms could be involved but would work under military supervision, he said.

Last year’s overthrow of Mursi was followed by a rise in violence from Islamist militants based in the Sinai peninsula, which has stoked concern about the security of the nearby Suez Canal. The government has been fighting militants in an ongoing campaign in the area.

“Sinai to a large degree has a sensitive status. The army is responsible to Egypt for this,” said Sisi.

Sisi’s allies have likened him to Nasser, the charismatic colonel who led a 1952 coup against the monarchy, set up an army-led autocracy and also rounded up Brotherhood members.

In 1956, Nasser nationalised the Suez Canal, leading to a failed invasion by Britain, which controlled the channel, as well as France and Israel.

Nasser was praised by Egyptians for pursuing big projects during his 14 years as president. Pro-government media did not hesitate to compare the Suez plans to Nasser’s own state-led infrastructure projects that were a source of national pride.

Egypt has planned for years to develop 76,000 sq km (29,000 sq miles) around the canal into an international industrial and logistics hub to attract more ships and generate income.

Neil Davidson, senior adviser for ports and terminals at London-based Drewry Maritime Research, said the new canal would not necessarily generate greater trade but the development of a hub around it could prove lucrative.

“The strategic location of Egypt and the canal is a key advantage… being a key point where cargo can be distributed or worked on. This hubbing concept is extremely valuable,” he said.

Reuters reported on Sunday that Egypt had chosen a consortium including global engineering firm Dar al-Handasah, as well as the Egyptian army, to develop the area.

A promotional video played at the launch event suggested the project would cut waiting times for vessels and allow ships to pass each other on the canal.

Mamish, the chairman, said the project would involve 35 kilometres (22 miles) of “dry digging” and 37 kilometres (23 miles) would be “expansion and deepening”, indicating the current Suez Canal, which is 163 km (101 miles) long, could be widened as part of the project.

The Panama Canal linking the Atlantic and Pacific Oceans in Central America, is also being expanded with a third set of locks being built to allow bigger ships to pass through the waterway. That project is due to open in 2016.

Among the bidders for the Suez project, according to Egypt’s Al Mal newspaper, was a group including state-run Arab Contractors and consultancy firm James Cubitt and Partners. Another included McKinsey & Co management consulting firm.