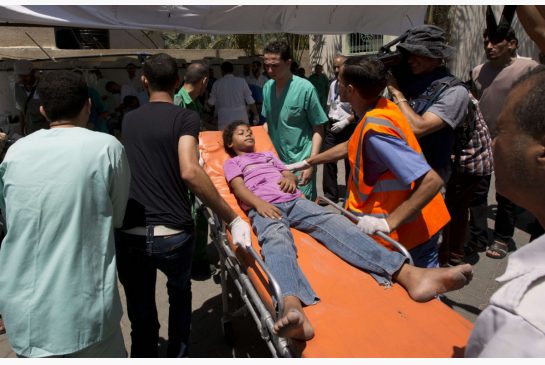 A Palestinian girl, wounded following an Israeli military strike, arrives at the hospital in Rafah in the southern Gaza Strip, on August 3, 2014.
Share:
The United States and the United Nations used the strongest language yet in condemning the latest strike on a U.N.-run shelter in Gaza, with Washington calling the attack “disgraceful.”

At least nine people at the school, which was being used as a shelter for about 3,000 people, were killed in the shelling.

The Israel Defense Forces said that it targeted three Palestinian Islamic Jihad members riding a motorcycle in the vicinity of the school.

The IDF said it is reviewing the consequences of the strike but didn’t say if the suspected militants were hit.

U.N. Secretary-General Ban Ki-moon said in a written statement that the attack was “yet another gross violation of international humanitarian law.”

He demanded a swift investigation into the attack, in which there was an explosion just outside the main gate of the school.

The United States, in a statement issued by the State Department, said it was “appalled.”

“We once again stress that Israel must do more to meet its own standards and avoid civilian casualties,” spokeswoman Jen Psaki said in a written statement. “The suspicion that militants are operating nearby does not justify strikes that put at risk the lives of so many innocent civilians.”

An IDF spokesman reiterated Israel’s point that militants try to use places where civilians congregate as cover.

“Hamas made a special effort during the past few weeks to fire from U.N. facilities,” Brig. Gen. Moti Almoz told CNN.

Ban said the incident was “a moral outrage and a criminal act.”

Thousands of Gaza residents had flocked to the shelter to escape weeks of violence — only to encounter more bloodshed.

“The dead and wounded in Rafah are still under the rubble and in the streets,” Palestinian Health Ministry spokesman Dr. Ashraf el-Qedra said earlier.

Chris Gunness, spokesman for the U.N. Relief and Works Agency, tweeted that the school was sheltering almost 3,000 internally displaced people.

The U.N said nine people were killed, while the Palestinian Health Ministry put the figure at 10. At least 27 people were wounded

At least six other U.N.-run shelters in schools in Gaza have been directly pounded by violence in the past month.

“We vigorously condemn today’s Israeli strike and find it incomprehensible that such violence has happened again, only four days since we carried out dead and wounded civilians who had sought refuge in a UN installation,” said a joint statement from UNRWA Commissioner-General Pierre Krahenbuhl and director of operations Robert Turner.

Throughout Gaza, the death toll continues to mount every day.

More than 1,800 people have been killed in Gaza since the current Israel-Hamas conflict began July 8, the Palestinian Health Ministry in Gaza said.

And in the past month, at least 64 Israeli soldiers and three civilians in Israel have been killed.

Palestinian officials described a public health crisis because of the lack of water, sanitation and primary health care.

Surgeons in Gaza have reported working 20-hour shifts to try to keep up with a flood of residents wounded by attacks. And the medical supplies are dwindling.

A pair of trucks from the International Committee of the Red Cross tried to enter Gaza to deliver emergency aid kits and blood — but had to turn away due to security concerns, ICRC spokeswoman Cecilia Goin said Sunday.

“The trucks are carrying a portion of ICRC’s 5,000 home destruction kits … for those whose homes have been completely destroyed or partially destroyed, and 3,000 units of blood,” Goin said.

An Israeli soldier was not captured and killed as initially believed, but died in an attack by a suicide bomber, the military said Sunday.

Israel had initially accused Hamas militants of capturing Lt. Hadar Goldin on Friday, as a temporary cease-fire to the conflict in Gaza rapidly unraveled.

Lt. Col. Peter Lerner, a spokesman for the IDF, said Sunday that Goldin was not captured and killed, but died in a suicide bombing along with two other Israeli soldiers. The IDF said militants in Gaza carried out the suicide attack.

Some of Goldin’s remains were found in and around the Gaza tunnel where the attack took place, Lerner said. He did not provide any more details on the purported suicide bombing.

Goldin, 23, was promoted to lieutenant posthumously.

Speculation about his fate varied wildly after the armed wing of Hamas, the al Qassam Brigades, announced it had lost contact with a group of its fighters in the Rafah area — the same area where Goldin was reportedly taken.

In a statement posted on its website, the militant group said it assumed all the fighters died in an Israeli airstrike, possibly along with an Israeli soldier. The group — which denied having information on Goldin — stopped short of saying the soldier was captured but said it was “assuming he was captured by the fighters.”

Whatever happened, the entire ordeal has only served to heighten the hostilities — with Israel saying it must attack Gaza to prevent the onslaught of rocket and mortar attacks on its territory, while Hamas and other Palestinians say Israel is the aggressor and directly responsible for hundreds of civilian deaths.

No rest on both sides

The bloodshed shows no signs of letting up.

The IDF said Sunday that soldiers who were looking for tunnel entrances in Gaza engaged militants emerging from one shaft. The squad of militants fled to a house where the IDF fired on them, hitting one militant. The Israeli forces then blew up the tunnel, the IDF said.

It was one of scores of attacks on targets in Gaza, the IDF said.

Sirens blared much of the day in Israel as at least 80 rockets were fired from Gaza, according to the Israeli military.

Israeli Prime Minister Benjamin Netanyahu vowed Saturday to “continue to act in full scale” against Hamas until all militant tunnels from Gaza to Israel are destroyed.

“A truce is a truce, but the presence of the Israeli forces inside Gaza and destroying the tunnels means it’s an aggression,” he said in an exclusive interview from Doha, Qatar.

“The Palestinian resistance has the right to self-defense and the right to deal with the invading Israeli forces who are inside our Gaza territories.”

Talking about the Israelis, Meshaal said, “What were they doing during the truce? They were destroying tens of houses, justifying their actions that they were looking for tunnels. What kind of cease-fire is this, it has no meaning this way.”

Peace efforts out of Cairo

As the conflict continued, Egyptian President Abdel Fattah el-Sisi touted a cease-fire initiative as a “real chance” to stop the bloodshed and the best way to get help into Gaza and launch talks.

An Egyptian proposal put forward last month was accepted by Israel but rejected by Hamas.

Members of a Palestinian delegation arrived in the Egyptian capital, Cairo, on Saturday to attend the negotiations, the Egyptian state-run news agency MENA reported.

The delegation included a representative of Fatah and Palestinian intelligence, with Hamas and Islamic Jihad representatives set to arrive later, the report said.

Israel will not send a delegation to Cairo, said Paul Hirschson, a spokesman for Israel’s Foreign Ministry.