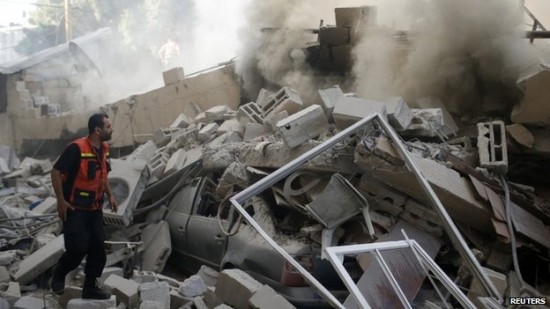 Israel says its target is Hamas, but Gaza’s health ministry says most victims have been civilians
Share:
The ex-leader of the Liberal Democrats has called Israel’s attacks on Gaza “foolish” and “disproportionate”.

Lord Ashdown was joined by Deputy PM Nick Clegg, who called for peace talks and an end to the violence.

Later, Labour leader Ed Miliband denounced the Israeli offensive as “wrong and unjustifiable” and said David Cameron should have opposed it.

It comes after a short-lived ceasefire collapsed and Israel said it would make Hamas pay an “intolerable price”.

More than 1,600 Palestinians, most of them civilians, and 65 Israelis, all but two soldiers, have been killed since the conflict began more than three weeks ago.

Mr Miliband said the prime minister was “wrong” not to have opposed Israel’s incursion into Gaza and his “silence” on the killing of civilians was “inexplicable”.

A Downing Street spokesman said Mr Cameron had been clear that both sides in the conflict should observe a ceasefire.

“We are shocked that Ed Miliband would seek to misrepresent that position and play politics with such a serious issue,” he said.

Speaking to the BBC Radio 4’s Today programme, Lord Ashdown said neither Israel nor Palestine could “blast their way to victory” and that the only way forward was for them to “sit down and talk to each other”.

Lord Ashdown said negotiations between Israel and Hamas may not be pleasant, but he compared the situation to the conflicts in Bosnia and Northern Ireland where peace deals were brokered.

“In Bosnia particularly, you had to talk to very unpleasant people,” he said.

“[Former Serbian president Slobodan] Milosevic was not the kind of person you would invite round to dinner but you had to talk to him.”

Lord Ashdown, formerly the UK’s special representative in Bosnia, said Israel had been “very foolish” to launch its military strikes given it had the “best anti-missile system in the world”.

He said Israel had lost the “support and sympathy of world opinion”.

Had UK troops in Afghanistan or Northern Ireland retaliated to civilian attacks and fired back, they would have been “guilty of a crime”, he said.

Writing in the Guardian, he said: “If Israel wants to secure lasting safety for its people, it must use political will, not military might, to break the cycle of violence.”

He also criticised Hamas, saying it used its tunnels to “terrorise Israeli civilians”.

A UN-brokered humanitarian ceasefire, intended to last 72 hours, ended on Friday after less than five hours, with each side blaming the other.

Scores of people are reported to have been killed in fresh clashes while Israeli forces are searching for a soldier, named as Hadar Goldin, 23, who went missing on Friday.

Israel says it is defending itself from attacks by Palestinian militants and blames Hamas for civilian deaths in Gaza, saying fighters deliberately operate from civilian areas.

Critics of Israel’s actions say Gaza is so densely populated any conflict there will inevitably affect civilian areas and cause civilian casualties.

A former defence minister earlier became the latest Tory MP to call on No 10 to take a firmer stance on the crisis.

Peter Luff, who was a defence minister between 2010 and 2012, said Israel’s actions were “brutal” and “difficult to justify”.

He said the Israeli government had an “absolute right” to protect its people from rocket attacks, but the reported death toll of more than 1,600 Gaza residents – including hundreds of children – was unacceptable.

Foreign Secretary Philip Hammond said both sides had to act proportionately and that agreeing a ceasefire was priority.

Meanwhile, International Development Secretary Justine Greening described the situation in Gaza as “nothing short of a humanitarian catastrophe”.