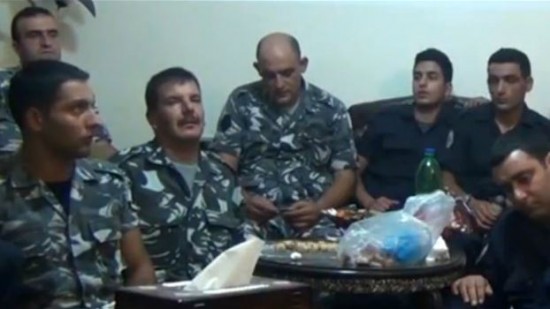 LBCI television that a number of Internal Security Forces were forced to defect by al-Nusra Front members on Sunday after being taken captive by the group.

About 20 security forces members were shown announcing their defection “from the army and Hezbollah” in a video uploaded to Youtube.

The abducted Lebanese members of the security forces announced that they were defecting in protest against the army’s “targeting of civilians in the eastern Bekaa region of Arsal.”

They also declared their condemnation of Hezbollah’s “terrorist actions” in Syria.

In the video the abducted Lebanese were told to present themselves to the camera and condemn the army and Hezbollah’s practices.

At the end of the video, a captor was seen presenting the defected members with sweets.

The Lebanese army battled Islamist fighters near the Syrian border on Saturday, killing 11 militants, a security official said, in a move against al Qaeda-linked gunmen who had seized a police station and killed two soldiers.

The gunmen included fighters from the Islamic State, a radical Sunni group that has seized control of large areas of Syria and Iraq, Lebanese security officials said.

The army issued a statement on Sunday announcing the death of 8 soldiers as result of the clashes .