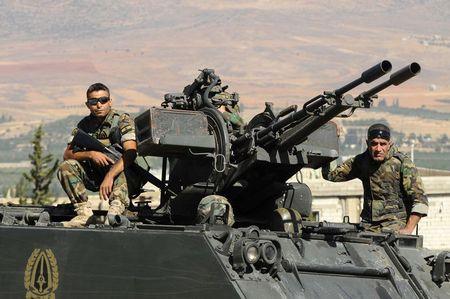 Lebanese army soldiers sit on top of an armoured vehicle near the entrance leading to Arsal August 3, 2014. REUTERS/Hassan Abdallah
Share:

BEIRUT, Lebanon – Lebanese soldiers traded fire with Islamist gunmen and shelled areas around the border town of Arsal on Sunday aiming to roll back the biggest incursion by militants into Lebanon since Syria’s civil war began.

At least 10 Lebanese soldiers have died in the fighting, which erupted after Islamists seized a police station following the arrest of one of their leaders on Saturday – an attack that army chief General Jean Kahwaji said was premeditated.

“What happened is far more dangerous than some believe,” Kahwaji told reporters in Beirut, saying the arrested commander had admitted to planning a large attack against army positions.

“The terrorist attack which occurred yesterday was not an attack by chance or coincidence. It was planned previously, a long time ago, awaiting the appropriate time,” he said.

An unknown number of militants and civilians, possibly dozens, were also killed in the fighting. More than a dozen members of Lebanon’s security forces were taken captive.

Security officials say the gunmen in Arsal include fighters linked to the Islamic State, an al Qaeda offshoot that has seized territory in Syria and Iraq, as well as Syria’s al Qaeda branch, the Nusra Front.

Bombardment of the area prompted a large number of the tens of thousands of refugees sheltering in the area to flee, residents said. Entire refugee families abandoned their shelters as fires broke out in the camps, Syrian activists in the area said. Television images showed plumes of black smoke rising from the mountainous area around the town.

“They’re shelling from all directions,” said Qassem Al-Zein, a Syrian doctor at the field hospital in Arsal, adding that the hospital had recorded 17 civilians killed so far, including refugees hit by the shelling. The wounded numbered 150, up to 15 of whom were militants, he said.

Lebanon, a Mediterranean country of about 4 million people that borders Israel, has struggled with the shockwaves of Syria’s three-year-old conflict, whose sectarian dimensions echo those of its own 1975-90 civil war.

Suicide attacks, car bombs, gun battles, kidnappings and rocket fire have plagued Lebanon, but the confrontation in Arsal has been the biggest direct clash between its army and rebels fighting to overthrow Syria’s President Bashar al-Assad.

Lebanon’s militant Shi’ite group Hezbollah had deployed its fighters around Arsal, a Sunni town sandwiched between Syrian government-controlled territory and Lebanese Shi’ite areas sympathetic to the group, a source said on Saturday.

Syrian activists in the town said Hezbollah appeared to have been involved in the fighting, but this was not possible to verify and the group did not comment on that point.

Hezbollah fighters have regularly taken part in battles against the Sunni rebels just over the border in Syria’s Qalamoun region for months, helping the Assad government forces to flush out insurgents from towns and villages near the border.

In its first statement on the crisis, Hezbollah said on Sunday that it stood “shoulder to shoulder” with the military as it confronted what it said was a threat to the “unity, sovereignty and stability” of Lebanon.

Lebanon has been buffeted by the same waves of conflict that have brought about the rise of hardline Sunni militants in Syria and Iraq. On Sunday, Islamic State fighters seized Iraq’s biggest dam, an oilfield and three towns.

Kahwaji said Lebanon’s army would resist any attempts to import Syria’s war into his country.

Soldiers battled masked gunmen overnight and into Sunday after militants opened fire on army positions in several areas of the port, the National News Agency said. A bomb also targeted an army patrol, wounding an officer and a soldier, it said.

Officials across Lebanon’s political spectrum have condemned the Arsal attack, but in a sign of the country’s own deep tensions some also took the opportunity to criticize their foes.

Jamil al-Sayyed, a Shi’ite and former head of Lebanon’s General Security agency, said responsibility for what was happening in Arsal fell on the Sunni-led Future Movement bloc.

Beirut’s perennial political deadlock has been worsened by tensions over Syria – Lebanon has been unable to elect a president since May because of disagreement over a candidate between its main Sunni and Shi’ite-led parliamentary blocs.

Arsal has long been a tinderbox for Lebanon’s tensions. Rebels operating across the border in Syria’s mountainous Qalamoun region have frequently crossed the porous border, often resting or seeking medical treatment in town.

Lebanon is hosting more than one million refugees who have fled Syria’s conflict. More than 100,000 of them are estimated to be living in and around Arsal in makeshift camps spread throughout the surrounding hills.

Soon afterward, gunmen seized the police station, attacking army checkpoints, taking at least 16 members of Lebanon’s security forces captive and demanding that Jumaa be freed. Kahwaji said the army had suffered 10 dead and 25 wounded, while 13 were still missing and may have been taken hostage.

A Twitter account that regularly publishes news from the Nusra Front, Syria’s al Qaeda branch, said the group had no links with Jumaa, but Nusra fighters had entered the area to help care for and protect refugees wounded by Lebanese army shelling.

The statement said the Nusra Front had not clashed with the army – although other groups had – and that its fighters were “ready to leave Arsal if the situation is resolved as soon as possible”.

Lebanese military vehicles have deployed around Arsal and shelled the area while Syrian warplanes have been bombing rebel positions in the town’s environs, residents say.