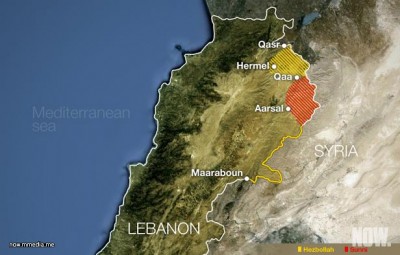 Earlier on Saturday Syrian Islamist militants launched a deadly attack on Arsal after the Lebanese army arrested an Al-Nusra Front commander amid a Syrian regime and Hezbollah offensive against insurgents across the border in Qalamoun.

The militants attacked two Lebanese Armed Forces checkpoints in Al-Maseeda and Wadi Hmeid, positions on the outskirts of the eastern Beqaa town in the Anti-Lebanon mountain range that straddles the border with Syria, Lebanon’s National News Agency reported

The NNA also reported that the gunmen stormed the Internal Security Forces branch in Arsal, in an attack that killed two local men who took up arms to defend the security post from the militants.

“Fighting is ongoing between Islamic militants and the LAF supported by local police in an attempt to stop an attack by the militants on army and security positions in Arsal,” NNA said.

The NNA also reported that two LAF helicopters took off from the Beqaa’s Riyaq air base and headed for the Arsal hills in search of the militants amid the heavy army deployment.

Meanwhile, Lebanese outlets said that two Lebanese soldiers had been abducted by the militants, but were shortly afterward freed.

Amid the chaotic situation, Arsal residents sent out messages on social media websites, calling for expulsion of the militants, and asking residents not to clash with the army.

The deployment of Islamic militants came after the LAF arrested a Syrian man involved with takfiri groups operating across the border from Arsal in Syria’s Qalamoun region, a security source told NOW’s correspondent in the Beqaa.

Update: Voice of Free Lebanon reported that the Syrian militants are now in control of Al-Maseeda and Wadi Hmeid positions on the outskirts of the eastern Beqaa town of Arsal and have raised the flag of The Nusra front.

MTV also reported that the Syrian air force has joined the fight in Arsal and is reportedly shelling the position of the Syrian militants.

According to analysts Hezbollah is slowly but surely trying to drag the Lebanese army into the Syrian conflict which could have very serious consequences for Lebanon.

The U.S. embassy in Lebanon condemned the attacks against the army in Arsal and reiterated support for troops for stability’s sake.

Former President Michel Suleiman stressed that all political differences must be put aside, calling for supporting the army and the security forces in against

The Army Command issued the following statement regarding the situation : “What happened and what is happening today is one of the most dangerous things that Lebanon has been subjected to because it revealed that there is someone who has been planning to target the country, the army and Arsal for a while.”

LBCI quoting security sources as saying :” The army’s airborne regiment is starting to retake control of posts that were lost during the Arsal clashes.”

LBCI also reported that the army handed over 6 of its wounded troops to the Lebanese Red Cross.

March 14 issued a statement in which it called for supporting the army and for the Syrian militants to go back to Syria and for Hezbollah fighters to quit the Syrian war and return to Lebanon . Here is a summary of the statement

1- “The need for extension of state sovereignty over the entire Lebanese territory through the deployment of the army and security forces along the Syrian – Lebanese border, particularly in the area of Arsal.

2- The need for the withdrawal of Syrian militants wherever they are inside Lebanese territory immediately.

3- The need for the withdrawal of Hezbollah from the fighting in Syria immediately.