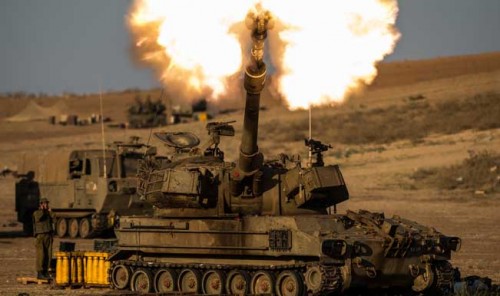 Israel signaled it was winding up the 25-day-old Gaza war unilaterally, saying on Saturday it would not attend Egyptian-hosted negotiations for a new truce and giving Palestinians who had fled fighting in one northern town the all-clear to return.

But shelling exchanges continued, with Palestinian officials saying Gaza’s mostly civilian death toll rose to 1,665 and Israelsaying its Iron Dome interceptor shot down rockets launched at the cities of Tel Aviv and Beersheba.

Several ceasefires between Israel and the Gaza Strip’s dominant Islamist Hamas faction had failed to take hold or quickly collapsed, most recently on Friday after two Israeli soldiers were killed and a third went missing in an ambush.

Israel accused Hamas of seizing lieutenant Hadar Goldin and the United States blamed the group for a “barbaric” breach of the truce. The United Nations was more guarded in its censure of Hamas but urged Goldin’s immediate release.

Seeking to shift responsibility, Hamas said it believed its gunmen had struck before Friday’s ceasefire began and that if they captured Goldin, he probably died with his captors in heavy Israeli barrages that followed.

A Palestinian delegation was to fly to Cairo for new truce negotiations, which would include Hamas’s demand that Egyptease movement across its border with blockaded Gaza. But Israel said it would not send its own envoys as scheduled on Saturday.

“Hamas is hoodwinking the international community again and again,” an Israeli official said. “It is not interested in an accommodation (with Israel).”

Israel launched a Gaza air and naval offensive on July 8 following a surge of cross-border rocket salvoes by Hamas and other Palestinian guerrillas, later escalating into ground incursions centered along the infiltration tunnel-riddled eastern frontier of the enclave but often pushing into urban areas.

With U.S. backing, Israel had said that with or without a truce its forces would pursue their main mission of hunting tunnels used by Hamas for several cross-border attacks. More than 30 of these, and dozens of access shafts, have already been unearthed and were being blown up, the military said. “Our understanding is that our objectives, most importantly the destruction of the tunnels, are close to completion,” a military spokesman, Lieutenant-Colonel Peter Lerner, said.

Crowded Gazan towns close to the Israeli border have seen devastating clashes, and the flight of tens of thousands of Palestinians, as tanks and troops swept in to confront dug-in guerrillas after the army warned civilians to evacuate.

Israel said on Saturday that evacuees from Beit Lahiya, a northern town with a population of 70,000, could go back home.

“Residents are advised to beware of explosive devices Hamas has spread across the area,” the military said, summarizing all-clear messages relayed via Palestinian liaison officers.

But fear gripped Palestinians from the town, on whose periphery Israeli armored columns could still be seen.

“No one has told us to go back,” said Talab Manna, a 30-year-old father of seven camped out at a U.N.-run school serving as a refugee haven. “We can’t risk going back and being bombed by the Israeli forces.”

After Friday’s ceasefire was shattered, Israeli Prime Minister Benjamin Netanyahu called his security cabinet into special session to discuss Goldin’s suspected capture in the southern town of Rafah, and warned Hamas and other Palestinian guerrillas would “bear the consequences of their actions”.

But Israeli media said Netanyahu and Defence Minister Moshe Yaalon would likely hold course in Gaza rather than escalate.

Citing an internal investigation complicated by inability to communicate with its gunmen in the Rafah area, Hamas’s armed wing said on Saturday it believed their ambush happened an hour before the truce began, in response to Israeli troop advances.

“We lost contact with the (Hamas) troops deployed in the ambush and assess that these troops were probably killed by enemy bombardment, including the soldier said to be missing – presuming that our troops took him prisoner during the clash,” the Hamas Qassam Brigades said in a statement.

“The Qassam Brigades has no information as of this time about the missing soldier, his whereabouts, or the circumstances of his disappearance.”

Quoting a senior military officer, Israel Radio also said Goldin’s condition was not known. It said he was last seen next to the two troops killed by a Hamas suicide bomber – suggesting Goldin may not have survived and his captors had a corpse.

Israel has confirmed that 63 soldiers have died in combat. Palestinian shelling has also killed three civilians in Israel.

Hamas had long threatened to capture Israelis for a prisoner swap. In 2011, Israel released more than 1,000 Palestinian prisoners in exchange for Gilad Shalit, a soldier snatched by Hamas five years earlier. Israel has twice freed prisoners for the bodies of soldiers held by Lebanon’s Hezbollah militia.

Washington, which like Israel calls Hamas a terrorist group, said it had asked go-betweensTurkey and Qatar to help recover Goldin.

The Rafah clash triggered Israeli shelling from the middle of Friday morning that killed 150 Palestinians. By afternoon, Israel declared an end to the truce – which was meant to have lasted 72 hours, allowing humanitarian relief to reach Gaza’s 1.8 million Palestinians and for further de-escalation talks.

Hamas, whose gunmen are dispersed for battle in Gaza’s battered districts, often in isolated bunkers, said the continued maneuvering by Israeli troops was a provocation.

Rafah residents said they had received recorded telephone warnings from Israel to stay indoors during a barrage that wreaked widespread ruin. Medical officials on Saturday counted at least a dozen homes destroyed, with the families who lived there each losing between two and eight members killed.

“It was like an action movie – explosions everywhere, cars flying up in flames, people crushed under houses that were bombed,” local man Bassim Abed told Reuters. “It was a miracle I escaped the area. It’s another miracle I didn’t die of fear.”

Ashraf Goma, Palestinian lawmaker from Abbas’s Fatah party said 50,000 people in villages to the east of the town had been displaced. He accused Israel of committing a war crime.

Among targets of Israeli air strikes on Saturday was a building in the Islamic University campus in Gaza City. The military said the building had been used by Hamas for weapons research and development of weapon manufacturing, and that dozens of tunnels and arms caches had been bombed elsewhere.

“The Egyptian initiative is a real chance to find a real solution to the crisis taking place in the Gaza Strip,” he said. “Lost time … complicates the situation more and more.”