US condemns shelling of Gaza school but resupplies Israel with ammunition 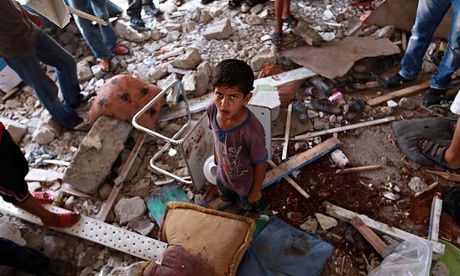 Palestinians inspect a damaged classroom of the UN school in Jabalia, northern Gaza. Photograph: Mohammed Saber /EPA
Share:
The United States issued a firm condemnation of the shelling of a United Nations school in Gaza that killed at least 16 Palestinians on Wednesday, but also confirmed it restocked Israel’s dwindling supplies of ammunition.

The White House expressed concern that thousands of civilians who had sought protection from the UN were at risk after the shelling of the girls’ elementary school. Some 3,300 civilians were taking shelter there, after being told by Israel to leave their homes.

The UN agency for Palestinian refugees, UNRWA, which runs the school, said its initial assessment was that it has been struck by Israeli artillery.

“The United States condemns the shelling of a UNRWA school in Gaza, which reportedly killed and injured innocent Palestinians – including children – and UN humanitarian workers,” said Bernadette Meehan, a spokeswoman for the White House’s National Security Council.

“We are extremely concerned that thousands of internally displaced Palestinians who have been called on by the Israeli military to evacuate their homes are not safe in UN designated shelters in Gaza.”

However Washington’s implied condemnation of Israel marked the strongest language used by the US since the conflict in Gaza began. The US also strongly criticised the hiding of weapons at UN facilities in Gaza, although officials acknowledged they did not know if rockets had been stored at the UNRWA school.

“All of these actions, and similar ones earlier in the conflict, are inconsistent with the UN’s neutrality,” Meehan said. “This violence underscores the need to achieve a ceasefire as soon as possible.”

At the same time however, there was little evidence of Washington using its leverage with Israel, including record levels of military aid, to apply pressure on Jerusalem to curtail its offensive.

The Pentagon confirmed a CNN report that the US had recently provided Israel with a shipment of ammunition. “The United States is committed to the security of Israel, and it is vital to US national interests to assist Israel to develop and maintain a strong and ready self-defense capability,” said Pentagon press secretary Rear Admiral Kirby. “This defense sale is consistent with those objectives.”

Two of the requested munitions were sourced from a secret stockpile the US keeps in Israel for emergencies. White House approval was not required to release the weaponry War Reserve Stockpile Ammunition-Israel (WRSA-I), Kirby added. He did not say whether the White House was involved in the decision to supply the other ammunition apparently requested by the Israelis.

The provision of ammunition could prove controversial for Washington, which has expresssed growing concern about the deaths Palestinian civilians while maintaining support for its close ally.

In Congress, both Democrats and Republicans were working on a package of additional military support for Israel’s “iron dome” security system.

Israel’s decision to press ahead with its offensive in Gaza despite a chorus of international condemnation was reaffirmed on Wednesday, following a meeting of the Israeli cabinet.

UNRWA said it was the sixth time one of its schools had been struck. “Last night, children were killed as they slept next to their parents on the floor of a classroom in a UN-designated shelter in Gaza. Children killed in their sleep; this is an affront to all of us, a source of universal shame,” said Pierre Krahenbuhl, commissioner-general.

“We have visited the site and gathered evidence. We have analysed fragments, examined craters and other damage. Our initial assessment is that it was Israeli artillery that hit our school, in which 3,300 people had sought refuge. We believe there were at least three impacts.”

Israel has repeatedly accused Hamas of using UN facilities as cover and UNRWA has discovered caches of rockets hidden at some of its schools.

A UN source said there was no evidence of militant activity inside the school attacked on Wednesday.

The state department withheld judgment on the UN’s assessment that Israel was behind the latest attack, saying there should be a more thorough investigation to establish culpability. While voicing mounting concern, US officials appeared reluctant to directly criticise its close ally after days of growing friction with Jerusalem that has occasionally surfaced in anonymous briefings in the press.

“We don’t know if there were rockets in the school,” said Marie Harf, a deputy spokeswoman at the state department, explaining Washington’s refusal to apportion explicit blame for the shelling. “We don’t know for certain who shelled the school.”

The UN secretary general Ban Ki-moon directly contradicted that position, saying the attack, which he described as “outrageous” and “unjustifiable”, had been perpetrated by Israel. Ban said that “all available evidence points to Israeli artillery
as the cause” of the pre-dawn attack, and he pointedly noted that Israeli military authorities had received the coordinates of the school from the United Nations 17 times, including on Tuesday night.