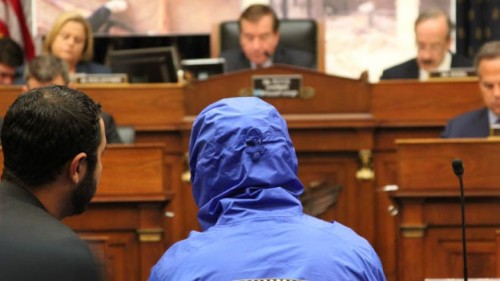 July 31, 2014: A Syrian defector who goes only by the name ‘Caesar,’ and who wore a hood to obscure his face, testifies before the House Foreign Affairs Committee.FNC
Share:

WASHINGTON , DC –  A Syrian defector who goes only by the name “Caesar” delivered dramatic and disturbing testimony Thursday to a congressional committee about the Assad regime’s atrocities, sharing with lawmakers just a few of the thousands of photos he took showing prisoners who were brutally beaten, starved and murdered.

Dressed in a blue rain jacket with the hood up and tied tightly around his face to disguise his appearance, Caesar spoke before the House Foreign Affairs Committee about what he saw while working for Bashar al-Assad’s army.

Speaking through a translator, Caesar, a former military photographer, testified he had smuggled 50,000 photographs of 10,000 dissidents out of Syria with the help of family members. Thursday’s hearing is the first time he told his story in a public setting on American soil.

Several pictures — some of which were turned into poster-size prints and displayed in the hearing room — depicted emaciated corpses, the bony skeletal remains littered in dirt fields.

Other pictures were of young children and the elderly. One man had his left eye gouged out. Others showed deep wounds, marks from strangulation and “beatings that broke through bones,” Caesar said.

“I not only had access to my photographs but others taken by other photographers as well as the state,” he said through a translator.

Caesar said he knew he had to show the world the images but also “knew death would be my fate” if caught.

“But my worth ethic, morals and religion did not allow me to be quiet,” he said.

Caesar’s trip to the U.S. has been managed by the Coalition for a Democratic Syria – a Syrian-American umbrella organization that coordinates nonprofit groups in Washington aiding the Syrian opposition.

The photos Caesar showed offered lawmakers a rare glimpse of the human tragedy tied to Syria’s three-year-old civil war which has already claimed more than 170,000 lives, by one group’s estimate.

“No one here can bring their lives back to them but I am here to tell you there are 150,000 people still incarcerated,” Caesar said, adding, “their fate will be the same fate as those I’ve taken pictures of.” 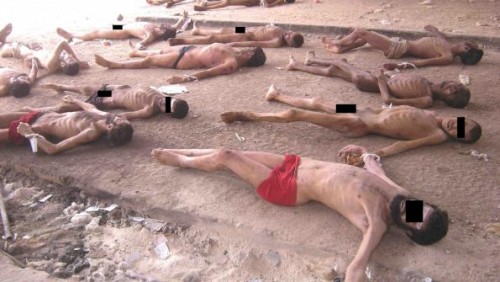 “If we had taken that approach a year and a half ago, we may have been able to stem the growth of ISIS and weaken the regime of Bashar Assad,” he said.

Instead, Engel said America has failed in its pursuit of Assad.

“We had a responsibility to send a message to Assad that his criminal behavior would not be tolerated, but we didn’t,” he said. “Instead, here we are a year later, and we see new evidence of the Assad regime’s torture chambers and death squads.”

Obama has come under fire for cooling his once-strong Assad “must go” demands. Despite the situation in Syria falling of the media’s radar, the death toll in the country’s three-year civil war is escalating daily.

Fresh casualty figures from the London-based Syrian Observatory for Human Rights, as reported by Reuters, say at least 700 people were killed in a 48-hour period two weeks ago that represented “the bloodiest fighting since the civil war began in 2011.”

That same group put casualties at more than 171,509, as of July 8 — though they believe the actual number could be much higher.