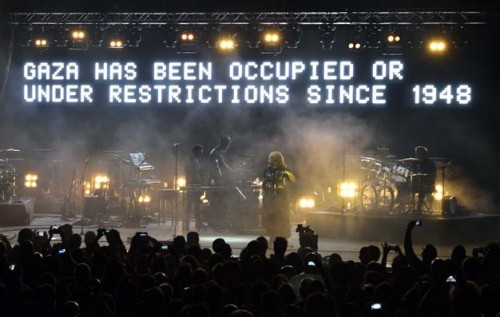 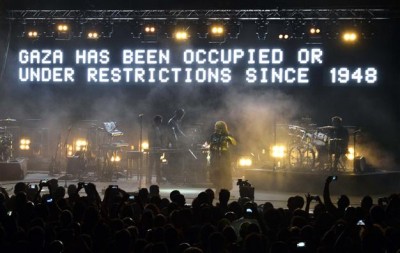 As the band played in Byblos, in Lebanon, just a few hundred kilometres north of Gaza, swaying music-lovers on July 29 night held up Palestinian flags as Massive Attack issued a rare, explicit condemnation of Israel’s offensive.

In an exclusive interview with AFP, frontman Robert Del Naja said: “This bombardment of an area that is one of the most densely-populated on earth, where civilians aren’t allowed to leave, is just beyond belief.”

Referring to Israel, he said backstage: “In order to protect yourself, do you really want to massacre another people? In the 21st century, it’s beyond belief.” Del Naja, whose Bristol band has enjoyed huge success since the early 1990s, slammed the world’s inaction.

“The politicians, they stay silent. It’s perverse, it almost suggests they’re not fit for office,” he said. The band accompanied their tracks with a shower of messages flashing on a huge black screen, expressing solidarity not only with the Palestinians, but also with Syrian refugees and with Christians forced by jihadists to flee Iraq.

In a long history of activism, the band publicly opposed the US and UK-led 2003 Iraq invasion. “Far from making the world a safer place, it was the complete opposite,” said Del Naja.

The concert, which wowed an audience of thousands in the ancient port town of Byblos, just north of Beirut, came after a visit by Del Naja and Grant Marshall to the Palestinian camp of Burj al-Barajneh, in the Lebanese capital.

Part of the concert’s proceeds will go to Al-Nakab Centre for Youth Activities, an association working in the camp.

Lebanon is home to nearly half a million Palestinians, descendants of people forced to flee their homes during the establishment of Israel in 1948.

Decades on, many still live in insalubrious UN-run camps dotted across the country. Mohammad, a young volunteer from the camp, told AFP their Burj al-Barajneh hosts were “very happy that foreigners were in solidarity”, even though not everyone there knew the group.

“Those who did know them, however, were amazed that Massive Attack was with us,” Mohammad said.

For Del Naja, the visit to the camp “was humbling… It changes your perspective, especially being in Downtown Beirut where it looks like Miami… You go into the camp, and there’s 45,000 people packed up into a square kilometre.” The band, which has refused to play in Israel in protest, has been criticised for its outspokenness.

“But this is the world of the democratic, Internet, technological revolution… This is democracy in action… If I’m told to shut up because I’m a musician, that’s crazy,” he said.