The Israeli-Palestinian conflict spills into Europe 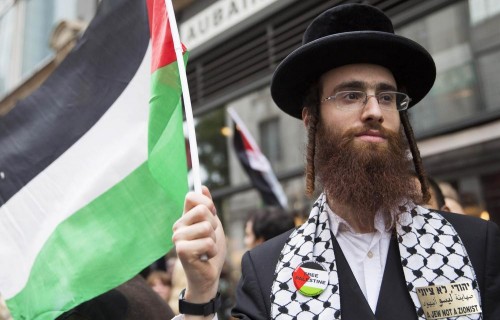 An American Jewish scholar holds a Palestinian flag during a protest against Israel’s air strikes on Gaza.
Share:
Berlin – Before the start of a pro-Palestinian rally — one of the scores being staged almost daily here since Israel launched its offensive in Gaza — an organizer on a bullhorn yelled out the do’s and don’ts as ordered last week by the Berlin police.

No burning the Israeli flag. No shouts of “Death to Israel.” And absolutely no repeating the slogan “Jew, Jew, cowardly pig, come out and fight alone” — a rhyming chant in German that had become increasingly common at pro-Palestinian rallies here before being nipped in the bud by German authorities.

Some demonstrators may have said such things, conceded Leila El Abtah, a 29-year-old protester who is the daughter of a Palestinian father and a German mother. But, she insisted, even thoughtful criticism against Israel is being misinterpreted here as hate speech. “There are more of us speaking out about Israel now,” she said. “Because of what happened during Hitler’s day, it is making Germans nervous.”

The Israeli-Palestinian conflict is echoing on the streets of Europe, sparking a rash of protests — both peaceful and violent — and ratcheting up tensions across the continent. Last Saturday in London, 45,000 protesters gathered outside the Israeli Embassy, chanting, “Free Palestine.” In France, a nation already facing an uptick in anti-Semitic violence before the Israeli strikes on Gaza, pro-Palestinian youths last week looted and set fire to Jewish businesses in a suburb of Paris. French authorities have banned anti-Israel protests, but thousands of young demonstrators have defied it, engaging police with rocks and bottles.

Yet perhaps nowhere are the deeds of protesters sparking more discomfort than here in Germany, where the most radical protest chants are rattling through the streets of Berlin like disturbing ghosts of the past.

There have been pro-Israel demonstrations, too, but few have been as large or as vehement as their pro-Palestinian counterparts. For politicians, the news media and broader German society, the outburst of rage aimed at Israel and, many argue, Jews in general, is testing both the limits of freedom of speech and the weight of history in Western Europe’s most populous nation.

“We’re aware that the world is watching us, how we’re handling the situation,” said Berlin police spokesman Stefan Redlich, adding that one person has already been charged with incitement for allegedly shouting “Heil Hitler!” during a protest. “It’s clearly part of the right of freedom of expression to criticize states that are waging wars. [But] it’s one thing to criticize the way Israel leads a war and another to call for people from Israel to get hurt. That’s the red line.”

To be sure, the face of rage here now bears little resemblance to the 1930s and 1940s. Some ethnic Germans have joined the protests, but the majority of those taking to the streets are part of a vast pool of Muslim immigrants and their German-born children.

The protests are rattling Germany’s fast-growing Jewish population, which in Berlin alone has tripled to nearly 30,000 since the fall of the Berlin Wall.

One imam at Berlin’s Al-Nur Mosque is now under investigation for recently calling on God to smite all “Zionist Jews.” Last week, a group of roughly 30 Muslims gathered outside an empty Berlin synagogue and hurled anti-Semitic abuse from the street.

“They pursue the Jews in the streets of Berlin . . . as if we were in 1938,” Yakov Hadas-Handelsman, the Israeli ambassador to Germany, recently decried in the Berliner Zeitung newspaper.

Levi Salomon, spokesman for a group that campaigns against anti-Semitism in Germany, said the Jewish community was shocked by photographs taken at a Berlin demonstration last week where the clothes of live children were brushed with red paint. To some, such images allude to the death of Palestinian children in the Israeli strikes on Gaza. But Jewish leaders here have condemned them as a revival of anti-Semitic myths that paint Jews as child killers who used their blood in religious rituals.

“I’ve monitored anti-Semitism in Germany for 20 years, but this is the worst image I’ve seen,” Salomon said.

Even Jewish leaders here say the situation in Germany is not as bad as in neighboring France, where a fierce strain of anti-Semitic violence has the Jewish community feeling under siege. But there are some signs that things here may also be taking a turn for the worse. On Tuesday night in the German city of Wuppertal, a Molotov cocktail was thrown at a synagogue (it landed in the street, causing no damage). Last Thursday night, Israel Daos, a shy 18-year-old Orthodox Jew, was punched in the face on his way to a synagogue in central Berlin. Daos described his assailant as “Arab or Turkish.”

“I heard what the protesters had been saying, because they march not far from here and I have heard them shout, ‘Death to Jews!’ ” said Daos, offering a nervous smile through his braces. “But I did not think things would get this bad.”

The outbreak of protests has triggered an alarm bell within German society, with leading politicians and the news media decrying a new rash of anti-Semitism that must be immediately stamped out.

Kai Diekmann — chief editor of Germany’s influential Bild tabloid, whose parent company sponsors work-stays for reporters in Israel to foster understanding of Jewish culture — issued a personal appeal to all Germans to raise their voices against anti-Semitism. In one piece responding to the rage on German streets, Bild featured descriptions of the groups taking part under the headline: “Who are the new Jew haters.”

The government of German Chancellor Angela Merkel has lashed out against the protests in unusually blunt terms: “These outburst and statements are an attack on freedom and tolerance and an attempt to destabilize our free democratic order. We cannot and will not accept this. . . . The security authorities are taking every attack onto a Jewish institution very seriously. Anti-Semitic acts are being prosecuted consequently and by all legal means.”

Organizers of pro-Palestinian rallies say that some protesters, in the heat of the moment, have indeed gone too far. But they say that rally organizers are now trying to follow new guidelines issued by police that forbid the use of anti-Semitic and violent slogans. They argue that their rage is directed at Israeli bombs, not Jews.

The holocaust at the hands of Nazi Germany, they claim, has robbed Germany of its ability to be objective on Israel. Some European politicians — including Britain’s Deputy Prime Minister Nicholas Clegg — have openly criticized Tel Aviv for disproportionate force. But Merkel, pro-Palestinian critics here note, has been unwavering in her support of Israel.

“Merkel shows only solidarity with Israel,” complained Ibrahim Ibrahim, 59, a member of the pro-Palestinian protests’ organizing committee. “Because of Germany’s past, she cannot be open minded.”