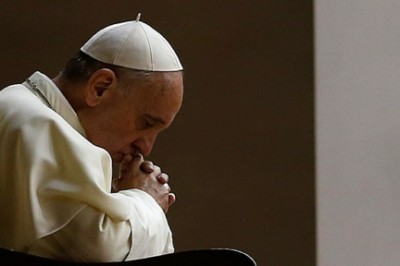 Pope Francis made an emotional plea for peace on Sunday in an impromptu addition to comments delivered at his weekly Angelus address in Saint Peter’s Square.

As the Argentinian-born pontiff wrapped up his regular address to the faithful, he spoke of the upcoming centenary of the outbreak of World War One and said his thoughts were on the Middle East, Iraq and Ukraine in particular.

With his voice appearing to crack with emotion, the pope broke off from his scripted remarks to make a direct appeal for fighting to end.

“Please stop!, I ask you with all my heart, it’s time to stop. Stop, please!”

While he made no direct reference to the situation in the Gaza Strip, the comments came after a humanitarian truce broke down on Sunday with the resumption of fighting in which more than 1,000 people, mostly civilians including dozens of children, have been killed.

“Brothers and sisters, never war, never war! I am thinking above all of children, who are deprived of the hope of a worthwhile life, of a future,” he said.