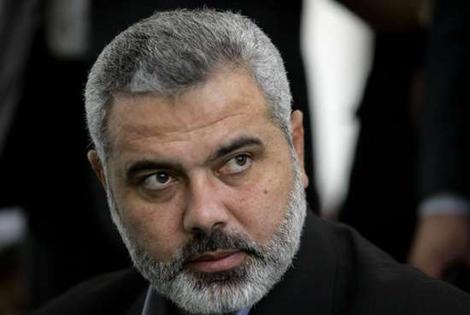 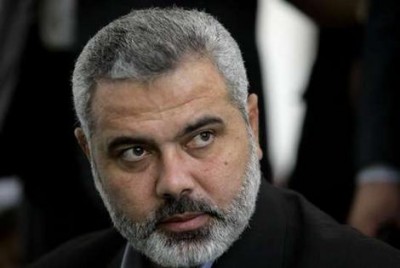 Israel’s military pounded targets in the Gaza Strip on Tuesday after Prime Minister Benjamin Netanyahu said his country needed to be prepared for a long conflict in the Palestinian enclave, squashing any hopes of a swift end to 22 days of fighting.

In the latest development, Israeli aircraft fired a missile at the house of Hamas Gaza leader Ismail Haniyeh before dawn on Tuesday causing damage but no casualties, Gaza’s interior ministry said.

An Israeli military spokeswoman had no information on the report but was checking for details.

Eleven people were killed in a strike on a house in the Bureij refugee camp in Gaza City as Israeli forces hit targets across the territory in the most widespread night of attacks in the coastal enclave so far.

Hamas said that its broadcast outlets, Al-Aqsa TV and Al-Aqsa Radio were also targeted. The television station continued to broadcast, but the radio station went silent.

Israel launched its Gaza offensive on July 8, saying its aim was to halt rocket attacks by Hamas and its allies. It later ordered a land invasion to find and destroy the warren of Hamas tunnels that crisscrosses the border area.

In a televised address on Monday night, a grim-faced Netanyahu said any solution to the crisis would require the demilitarization of the Palestinian territory, which is controlled by Hamas Islamists and their militant allies.

As night fell over Gaza, army flares illuminated the sky and the sound of intense shelling could be heard. The military warned thousands of Palestinians to flee their homes in areas around Gaza City – usually the prelude to major army strikes.

“We need to be prepared for a protracted campaign. We will continue to act with force and discretion until our mission is accomplished,” Netanyahu said.

A number of rockets fired from Gaza were launched toward various regions in southern and central Israel, including the Tel Aviv area. At least one of the rockets was intercepted by the Iron Dome system. No casualties or damage were reported.

Some 1,087 Gazans, most of them civilians, have died in the 22-day-old conflagration. Israel has lost 48 soldiers and another three civilians have been killed by Palestinian shelling.

The explosion of violence, after a day of relative calm on Sunday, appeared to wreck international hopes of turning a brief lull in fighting into a longer-term ceasefire.

Gaza’s dominant Hamas Islamists said they had accepted a U.N. call for a pause in hostilities on Monday to coincide with Eid, which marks the end of the fasting month of Ramadan.

Israel initially balked, having abandoned its own offer to extend a 12-hour truce from Saturday when Palestinian rockets kept flying. However, calm gradually descended through the night with just the occasional exchange of fire heard until a series of blasts shook Gaza in the afternoon.

Foreign pressure has been building on Netanyahu to muzzle his forces, with both U.S. President Barack Obama and the U.N. Security Council urging an immediate ceasefire that would allow relief to reach Gaza’s 1.8 million Palestinians, followed by negotiations on a more durable cessation of hostilities.

Israel wants guarantees Hamas will be stripped of its tunnels and rocket stocks. It worries the Palestinian Islamists will parlay the truce talks mediated by their friends in Qatar andTurkey into an easing of an Israeli-Egypt blockade on Gaza.

In his television address, Netanyahu said any solution to the crisis would need to see Hamas stripped of its weapons.

“The process of preventing the armament of the terror organization and demilitarization of the Gaza Strip must be part of any solution. And the international community must demand this forcefully,” he said.

Hamas said its forces had infiltrated Israel to retaliate for the killing of the children in a beach camp.

Tension between Netanyahu’s government and Washington has flared over U.S. mediation efforts, adding yet another chapter to the prickly relations between the Israeli leader and Obama.

Repeated U.S.-led negotiations over 20 years have failed to broker a permanent peace deal. The most recent round collapsed in April, with Palestinians livid over Jewish settlement building in the occupied West Bank and Israelis furious that Western-backed Palestinian President Mahmoud Abbas had signed a unity pact with old foe Hamas.

Qatari Foreign Minister Khaled Al-Atteya said Israel had not respected a ceasefire agreement brokered by Cairo that ended the last Gaza war in 2012 and it was time the blockade of the coastal enclave – also enforced by next-door Egypt – was lifted.

Israel has signaled it wants a de-facto halt to fighting rather than an agreement that would preserve Hamas’s arsenals and shore up its status by improving Gaza’s crippled economy.

The main U.N. agency in Gaza, UNRWA, said more than 167,000 displaced Palestinians had taken shelter in its schools and buildings, following repeated calls by Israel for civilians to evacuate whole neighborhoods ahead of military operations.

“His threats do not frighten either Hamas or the Palestinian people, and the (Israeli) occupation will pay the price for its massacres against children and civilians,” Hamas spokesman Sami Abu Zuhri told Reuters.

Speaking in New York, U.N. Secretary-General Ban Ki-moon deplored what he described as a lack of resolve among all parties in the conflict.

“It’s a matter of their political will. They have to show their humanity as leaders, both Israeli and Palestinian,” he told reporters. “Why these leaders are making their people to be killed by others? It’s not responsible, (it’s) morally wrong.”

Ban noted that “all sides must meet all obligations under international humanitarian law, both towards civilians ahead of impending attacks, as well as maintaining proportionality in any kind of military response.”