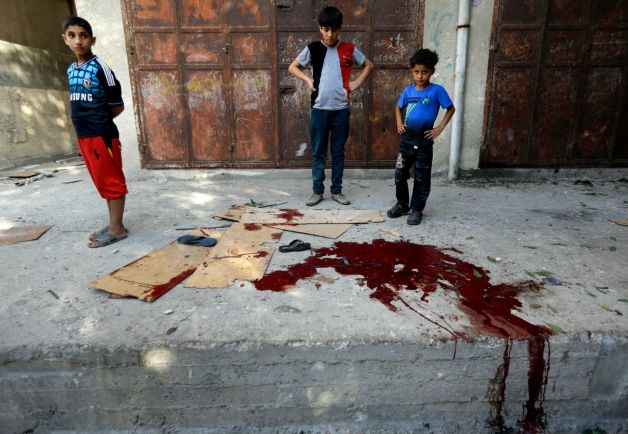 Palestinians look at a pool of blood from victims of an explosion that killed 10 people, 9 of them children, at a park at Shati refugee camp, in the northern Gaza Strip, Monday, July 28, 2014. Israeli and Palestinian authorities traded blame over the attack and fighting in the Gaza war raged on despite a major Muslim holiday. Photo: Lefteris Pitarakis, AP
Share:

The Israeli military says nine soldiers have been killed in separate attacks in ongoing Gaza fighting.

The announcement brings the toll of soldiers killed to 52. Three civilians have also been killed on the Israeli side. Palestinian health officials say more than 1,000 Palestinians have been killed since the war began the three weeks ago.

Israeli Prime Minister Benjamin Netanyahu earlier said Monday that Israel must be ready for a “prolonged” military operation in the Gaza Strip and will “act aggressively and responsibly” until the mission is completed.