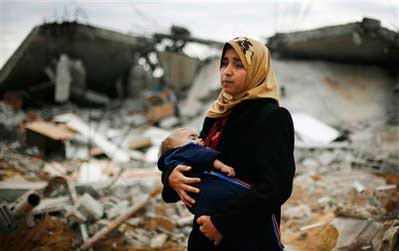 The Israeli military has resumed fighting in Gaza after accusing Hamas of violating a humanitarian truce, which had been extended by Israel.

Air raid sirens sounded in southern and central Israel this morning as militants in Gaza fired a salvo of rockets across the border.

In a statement the Israeli military said: “Following Hamas’ incessant rocket fire throughout the humanitarian window, which was agreed upon for the welfare of the civilian population in Gaza, the (army) will now resume its aerial, naval and ground activity in the Gaza Strip.”

Israel signalled the end to its unilateral truce with tanks and artillery pounding targets in Gaza, sending plumes of thick black smoke into the sky.

At least three people were reported killed in separate strikes.

The renewed offensive came after the Israeli army this morning said a soldier had been killed yesterday by a shell fired from Gaza, taking to 43 the number of Israeli troops to die in combat. Three civilians have also been killed by rocket fire into Israel.

Israel had extended a ceasefire until midnight (10pm UK time) on Sunday at the UN’s request, but said it would retaliate if attacked.

Hamas had immediately rejected the truce.

“No humanitarian ceasefire is valid without Israeli tanks withdrawing from the Gaza Strip and without residents being able to return to their homes and ambulances carrying bodies being able to freely move around in Gaza,” spokesman Fawzi Barhum said.

Some 132 bodies were reportedly pulled from the rubble in Gaza during the lull , while the pause allowed Palestinians to stock up on supplies.

More than 1,053 Palestinians have died since Israel launched a military operation more than two weeks ago.

Late Saturday the Ezzedine al-Qassam Brigades, the military wing of Hamas, claimed responsibility for rocket attacks on Israel immediately after the expiration the initial 12-hour ceasefire.

The resumption of rocket fire led police to clear a protest in Tel Aviv, where thousands of Israelis were demonstrating against their government’s military operation.

Meanwhile, world leaders continue their attempt to thrash out a wider ceasefire in Paris.