I.S. jihadists killed over 50 Syrian soldiers in an ambush 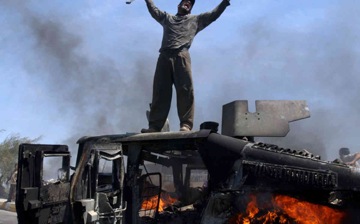 Jihadists from the Islamic State group have killed at least 50 Syrian soldiers in an ambush, summarily executing most of them after their capture, a monitoring group says.

The assault in Raqa province, the jihadists’ Euphrates valley stronghold, came amid their fiercest assault yet on Damascus-held territory.

The deaths added to 74 already killed in the offensive across the north and northeast, the Syrian Observatory for Human Rights said on Friday.

‘At least 50 soldiers were ambushed, some of them were killed in fighting but most of them were beheaded,’ Observatory director Rami Abdel Rahman said.

IS militants claimed the toll was as high as 75.

‘Allah be praised, 75 soldiers of the 17th division were captured at Abu Shared and they were beheaded,’ one sympathiser tweeted.

Media close to the regime remained silent on the deaths in Raqa.

The 17th division is one of three still holding positions in the IS-occupied region and operates out of a vast military base.

On Friday, the army repositioned the 17th division, the Observatory said, without giving further details.

It is the first stand-off of this magnitude between IS and Syrian government forces, with the jihadists intent on ‘cleansing’ the territories it controls of the regime presence, the Observatory said.

The IS, which proclaimed a ‘caliphate’ in an area spanning the Syrian and Iraqi borders in June, controls swathes of land in both countries and is seeking to extend its power and influence.