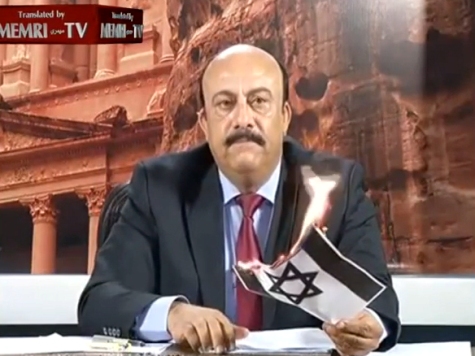 A TV host in Jordan burned a paper Israeli flag live on air during a discussion on the ongoing Gaza campaign.

In a clip posted to YouTube by the Middle East Media Research Institute (MEMRI), Zoher Al-Azzeh burned the flag on Jordan’s 7 Stars TV while also calling for the US embassy in Jordan to be shut down, accusing America of using it as a “centre for spying”.

Describing the Israelis as “occupiers”, Al-Azzeh apologised to viewers for earlier having shown them graphic images of injured Palestinians, and then said: “For the sake of Palestine and its children, allow me to burn this filthy flag of the Zionist entity for the whole world to see”, before holding what appears to be an A4 paper print-off of the Israeli flag and setting light to it with a cigarette lighter.

It takes a while for the paper to burn, during which the host adds: “The world should know that the Zionists are our enemies. They are criminal murderers and we must fight them.

“We must demand that all Arab peoples expel them from their countries, starting with Jordan.”

He concludes: “I spit on this flag!” but actually blows on it to try to fan the flames.