Has Obama checked out ? 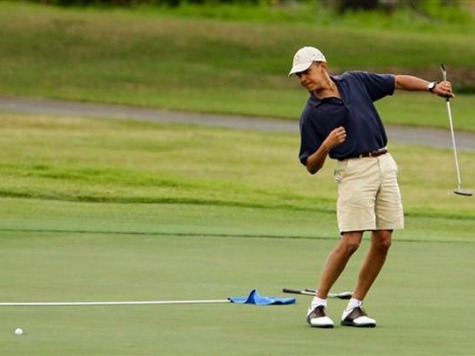 The president’s demeanor is worrying a lot of people. From the immigration crisis on the Mexican border to the Islamic State rising in Mesopotamia, Barack Obama seems totally detached. When he does interrupt his endless rounds of golf, fundraising and photo ops, it’s for some affectless, mechanical, almost forced public statement.

Regarding Ukraine, his detachment — the rote, impassive voice — borders on dissociation. His U.N. ambassador, Samantha Power, delivers an impassioned denunciation of Russia. Obama cautions that we not “get out ahead of the facts,” as if the facts of this case — Vladimir Putin’s proxies shooting down a civilian airliner — are in doubt.

The preferred explanation for the president’s detachment is psychological. He’s checked out. Given up. Let down and disappointed by the world, he is in withdrawal.

Perhaps. But I’d propose an alternate theory that gives him more credit: Obama’s passivity stems from an idea. When Obama says Putin has placed himself on the wrong side of history in Ukraine, he actually believes it. He disdains realpolitik because he believes that, in the end, such primitive 19th-century notions as conquest are self-defeating. History sees to their defeat.

“The arc of the moral universe is long, but it bends toward justice” is one of Obama’s favorite sayings. Ultimately, injustice and aggression don’t pay. The Soviets saw their 20th-century empire dissolve. More proximally, U.S. gains in Iraq and Afghanistan were, in time, liquidated. Ozymandias lies forever buried and forgotten in desert sands. 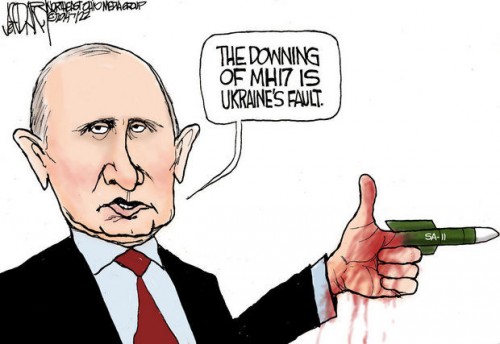 Remember when, at the beginning of the Ukraine crisis, Obama tried to construct for Putin “an offramp” from Crimea? Absurd as this idea was, I think Obama was sincere. He actually imagined that he’d be saving Putin from himself, that Crimea could only redound against Russia in the long run.

If you really believe this, then there is no need for forceful, potentially risky U.S. counteractions. Which explains everything since: Obama’s pinprick sanctions; his failure to rally a craven Europe; his refusal to supply Ukraine with the weapons it has been begging for.

The shooting down of a civilian airliner seemed to validate Obama’s passivity. “Violence and conflict inevitably lead to unforeseen consequences,” explained Obama. See. You play with fire, it will blow up in your face. Just as I warned. Now world opinion will turn against Putin.

To which I say: So what? World opinion, by itself, is useless: malleable, ephemeral and, unless mobilized by leadership, powerless. History doesn’t act autonomously. It needs agency.

Or did Obama think Putin would be shamed into regret and restraint by the blood of 298 innocents? On the contrary. Putin’s response has been brazen defiance: denying everything and unleashing a massive campaign of lies, fabrications and conspiracy theories blaming Ukraine and the U.S.

putin cartoon mh 17Putin doesn’t give a damn about world opinion. He cares about domestic opinion, which has soared to more than 80 percent approval since Crimea. If anything, he’s been emboldened. On Wednesday, his proxies shot down two more jets — a finger to the world and a declaration that his campaign continues.

A real U.S. president would give Kiev the weapons it needs, impose devastating sectoral sanctions on Moscow, reinstate our Central European missile-defense system and make a Reaganesque speech explaining why.

Obama has done none of these things. Why should he? He’s on the right side of history.

Of course, in the long run nothing lasts. But history is lived in the here and now. The Soviets had only 70 years, Hitler a mere 12. Yet it was enough to murder millions and rain ruin on entire continents. Bashar al-Assad, too, will one day go. But not before having killed at least 1000,000 people.

All domination must end. But after how much devastation? And if you leave it to the forces of history to repel aggression and redeem injustice, what’s the point of politics, of leadership, in the first place?

The world is aflame and our leader is on the 14th green. The arc of history may indeed bend toward justice, Mr. President. But, as you say, the arc is long. The job of a leader is to shorten it, to intervene on behalf of “the fierce urgency of now.” Otherwise, why do we need a president? And why did you seek to become ours?