Ceasefire ends in Gaza after Hamas rejected the extension 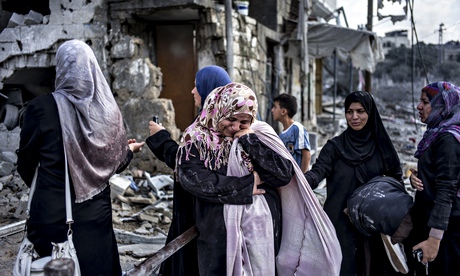 Palestinian women react to the destruction in Beit Hanuon, northern Gaza Strip, during the ceasefire. Photograph: Marco Longari/AFP/Getty Images
Share:
Benjamin Netanyahu’s inner circle of security advisers were due to discuss extending a temporary ceasefire in the Gaza Strip on Saturday evening, after a group of foreign ministers meeting earlier in the day in Paris urged Israel to hold fire.

The meeting of the 10-member security cabinet came after a 12 hour humanitarian pause in fighting on Saturday that allowed Gaza health authorities to extract dozens of bodies hidden underneath rubble for days in border zones that have been a focus of intense fighting.

An Israeli official confirmed the country had agreed to extend the humanitarian pause in Operation Protective Edge for four hours in response to a UN request. However, Hamas later rejected the extension; in a message to reporters on Saturday, spokesman Sami Abu Zuhri said there was “no agreement” on extending the calm.

Sirens sounded in Tel Aviv and other Israeli cities, signalling that militants had resumed firing rockets from Gaza.

The lull in fighting that halted Israeli bombing and militant rocket fire in Gaza was due to expire at 8pm.

The temporary halt in fighting allowed residents of areas where Israeli tanks and troops have dug in to return to their homes, and journalists who had been unable to cover the fighting safely for the past week to see the battle zone for the first time.

In al-Sheja’iya, east of Gaza City, where Israel’s army launched a massive assault on July 20-21, many houses and entire areas were reduced to rubble and craters – scenes that brought comparisons with the devastation in the worst-hit war zones of Syria.

Israel on Saturday released the names of four more of its soldiers killed in the 19-day-old operation, bringing total military deaths in the operation to 40.

The Palestinian death toll has climbed to nearly 1,000. Most of those who have died were civilians, killed because they were in or near buildings targeted by the Israeli military.

The war in Gaza has brought growing international criticism of Israel for using disproportionate force.

However, Mr Netanyahu’s government is resisting calls for any ceasefire agreement that would allow Hamas and other militant groups to regroup. Military officials say the main goal of the operation – destroying Hamas’ extensive tunnel systems that allow it to operate freely and burrow into Israel – is not yet complete.

Despite international condemnation and the rising death toll on both sides, Mr Netanyahu has political and public backing for the war.

Israel’s army continued its work on Hamas tunnels on Saturday, a government official said, even during the pause in fighting.

Earlier on Saturday at the foreign ministers meeting in Paris, which included US secretary of state John Kerry, officials called for an extension of the current temporary ceasefire and said they were also continuing to seek the implementation of a full ceasefire “as rapidly as possible”.

In a statement after the talks, Laurent Fabius, French foreign minister, said the group, which included ministers from Turkey and Qatar, sought a “negotiated, durable ceasefire which responds to the security needs of the Israelis as well as the needs of the Palestinians in terms of access and social-economic development [of Gaza] and access to the territory of Gaza”.

Mr Fabius added that all the ministers expressed their “solidarity with the civilian populations hit by the fighting”.

Mr Kerry spent Friday scrambling to organise the brief ceasefire amid new violence that spread to the West Bank and signs of disagreement between the US and Israel.

“The necessity right now is to stop the loss of life,” British foreign secretary Philip Hammond told reporters in Paris.

“And we stop the loss of life by getting this ceasefire to roll over for 12 hours, 24 hours or 48 hours – and then again until we have established the level of confidence that allows the parties to sit round a table to talk about the substantive issues.”