UN chief ‘appalled’ by shelling of UN shelter in Gaza 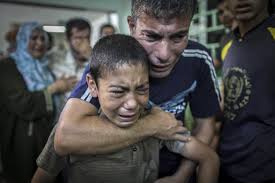 A Palestinian man comforts his son after they lost a relative in the attack on the U.N. school in the Gaza Strip.
Share:

FIFTEEN Palestinians were killed when an Israeli shell slammed into a UN shelter where hundreds of civilians had taken refuge, sending the death toll in Gaza close to 800 despite world efforts to broker a ceasefire.

The strike hit a UN school sheltering some of the 100,000 Palestinians driven from their homes in search of a safe haven after weeks of deadly fighting between Israeli troops and Hamas militants.

The shell crashed down in the middle of the courtyard where people had set up camp, leaving the ground covered in bloodstains.

Gaza’s emergency services said at least 15 people had been killed and more than 200 wounded, sending the Palestinian death toll from 17 days of fighting to 798.

UN chief Ban Ki-moon said: “Many have been killed — including women and children, as well as UN staff.”

He said he was “appalled” by the news and “strongly condemned” the attack which he said “underscores the imperative for the killing to stop — and to stop now”.

Washington said it was “deeply saddened and concerned about the tragic incident”, without explicitly blaming its ally Israel for the shelling.

“We again urge all parties to redouble their efforts to protect civilians,” State Department spokeswoman Jen Psaki said in Cairo, where Secretary of State John Kerry is trying to negotiate a ceasefire.

Mr Kerry reached out to Hamas allies Turkey and Qatar on Thursday as he sought to further regional efforts to broker an end to the bloodshed.

The US top diplomat is seeking to garner support for an Egyptian-drafted proposal but State Department deputy spokeswoman Marie Harf acknowledged the talks were “very complicated”.

A US official travelling with Mr Kerry said: “Right now gaps remain between the parties, so his focus is on finding a formula that both sides can accept.”

Hamas has rejected the Egyptian proposal so far, with its exiled leader Khaled Meshaal saying yesterday that there could be no halt to the fighting without an end to Israel’s eight-year blockade on Gaza first.

The Egyptian plan calls for a ceasefire first and talks afterwards on a long-term solution to Gaza’s problems.

“After that, we will discuss what would happen in the future,” he said.

There was no let-up to the violence in Gaza, however, with most of yesterday’s 98 victims killed in and around Khuzaa, a flashpoint area east of Khan Yunis which has been the site of intensive fighting since Tuesday.

But the biggest single strike was at the school in the north, where the UN agency for Palestinian refugees (UNRWA) said it had been trying to coordinate with the army over the evacuation of civilians, without success.

Although UNRWA did not immediately give its own toll, spokesman Chris Gunness said there were “multiple dead and injured” after an Israeli tank shell hit a UN school being used as a shelter.

An AFP correspondent saw nine bodies, including that of a year-old baby and his mother at a nearby mortuary.

“We’ve spent much of the day trying to negotiate or to coordinate a window so that civilians, including our staff, could leave,” Mr Gunness said.

“That was never granted … and the consequences of that appear to be tragic.”

But Israeli army spokesman Lieutenant Colonel Peter Lerner cast doubt on whether the military was to blame, suggesting militants firing rockets near the school could have caused the deaths.

He also took issue with the claim that Israel had rejected a humanitarian truce around the school, saying it had implemented a four-hour window for evacuations.

The Gaza-based Palestinian Centre for Human Rights has said more than 80 per cent of the casualties so far have been civilians, and a quarter of them children, triggering growing international alarm over the civilian body count.

“As this campaign goes on and the civilian casualties in Gaza mount, Western public opinion is becoming more and more concerned and less and less sympathetic to Israel,” warned British Foreign Secretary Philip Hammond.

UN humanitarian chief Valerie Amos expressed deep concern about the mounting civilian casualties, saying it was “almost impossible” for Palestinians to shelter from Israeli air strikes in the densely-populated territory.

Meanwhile, US airlines have lifted a two-day suspension of flights to Israel, but not all international airlines followed suit, with Germany’s Lufthansa and Air France keeping their Tel Aviv flights grounded.

The ban was put in place on Tuesday after a rocket hit a house very close to the runways.

So far, 32 Israeli soldiers and three civilians have died in the fighting.

With the nation in mourning, the inauguration ceremony was scaled down, but Rivlin said it sent a “very clear message to our enemies: you have not overcome us and you will not do so”.