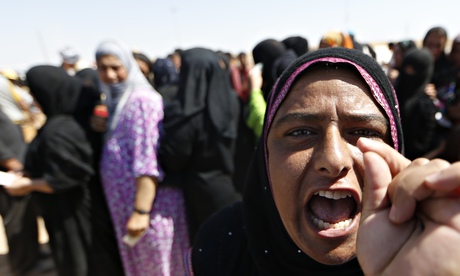 Jihadists in Iraq have ordered that all women between the ages of 11 and 46 must undergo female genital mutilation (FGM), which could affect up to four million women and girls in the war-ravaged country, a UN official said Thursday.

The UN’s second most senior official in Iraq, Jacqueline Badcock, said, “It is a fatwa (or religious edict) from ISIS, we learnt about it this morning. We have no precise numbers.”

The Islamic State, formerly known as the Islamic State of Iraq and the Levant (ISIS), took over large swathes of the country last month and has begun imposing its extreme Salafist interpretation of Islam.

Badcock said that if you took UN population figures as a guide, around “four million girls and women could be affected”.

Female genital mutilation is unusual in Iraq and is only practised in “certain isolated pockets of the country”, she added.

Around 125 million women and girls in Africa and the Middle East have undergone FGM. Over eight million have experienced Type III, which is most common in Djibouti, Eritrea, Ethiopia, Somalia and Sudan. The practice is an ethnic marker, rooted in gender inequality, ideas about purity, modesty and aesthetics, and attempts to control women’s sexuality.

FGM has been outlawed in most of the countries in which it occurs, but the laws are poorly enforced. The health effects depend on the procedure but can include recurrent infections, chronic pain, cysts, an inability to get pregnant, complications during childbirth and fatal bleeding, according to reports

Badcock said only 20 families from the ancient Christian minority now remain in Mosul, the northern Iraq city which ISIS has taken as the capital of its Islamic state. Most have reportedly fled north into Kurdish-controlled territory.

Badcock said some Christians have converted to Islam, while others have opted to stay and pay the jiyza, the tax on non-Muslim’s ISIS has imposed.