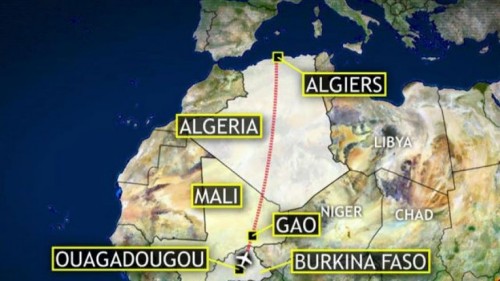 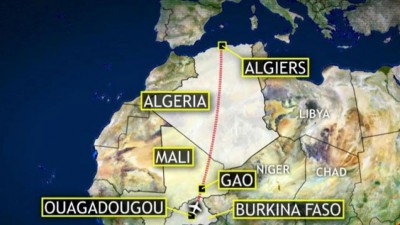 French officials dispatched a military unit to secure the site in restive northern Mali where an Air Algerie plane crashed with the loss of 116 people. France’s interior minister said Friday that terrorism cannot be excluded as a cause for the tragedy, though it was likely due to bad weather.

French president Francois Hollande announced Friday that there were no survivors in the crash of the MD-83 aircraft, owned by Spanish company Swiftair and leased by Algeria’s flagship carrier, which disappeared from radar less than an hour after it took off early Thursday from Burkina Faso’s capital, Ouagadougou, for Algiers. The plane had requested permission to change course due to bad weather.

Speaking after a crisis meeting, Hollande also announced that one of the aircraft’s two black boxes has been found in the wreckage, in the Gossi region near the border with Burkina Faso. It is being taken to the northern Mali city of Gao.

A French Reaper drone based in Niger spotted the wreckage, French Transport Minister Frederic Cuvillier told France-Info radio on Friday. Two helicopter teams also overflew, noting that the wreckage was in a concentrated area. A column of soldiers in some 30 vehicles were dispatched to the site, he said.

A statement early Friday from the Hollande’s office said the aircraft had been clearly identified “despite its state of disintegration.”

Quick discovery of the wreckage is “decisive” in piecing together what happened, the transport minister said, describing the aircraft as “disintegrated” and debris “in an apparently small area.”

“We think the plane went down due to weather conditions, but no hypothesis can be excluded as long as we don’t have the results of an investigation,” French Interior Minister Bernard Cazeneuve told RTL radio.

“Terrorist groups are in the zone. … We know these groups are hostile to Western interests,” Cazeneuve said.

French forces intervened in northern Mali in January 2013 to rout Islamist extremists controlling the region. A French soldier was killed earlier this month near the major town of Gao, where French troops remain. Separatist Touaregs also have been fighting each other.

Nearly half the 110 passengers aboard the plane were French, and France is deeply shaken by the drama. The president promised to mobilize all French military and civilian means in the region and call on partners to help.

The French gave the location of the crash site as in the Gossi region of Mali, on the border with Burkina Faso.

“We sent men, with the agreement of the Mali government, to the site, and they found the wreckage of the plane with the help of the inhabitants of the area,” said Gen. Gilbert Diendere, a close aide to Burkina Faso President Blaise Compaore and head of the crisis committee set up to investigate the flight.

The crash was the third airline disaster within a week.

Last week, a Malaysia Airlines flight was shot down over war-torn eastern Ukraine; the U.S. has blamed it on separatists firing a surface-to-air missile. On Wednesday, a Taiwanese plane crashed during a storm, killing 48 people.

French forces had joined the search for the Air Algerie flight, alongside Algeria and other neighboring countries plus the U.N. peacekeeping mission in Mali, known as MINUSMA. Algerian aircraft also participated in the hunt.

Swiftair, a private Spanish airline, said the plane was carrying 110 passengers and six crew, and left Burkina Faso for Algiers at 0117 GMT Thursday.

The passengers were 51 French, 27 Burkina Faso nationals, eight Lebanese, six Algerians, five Canadians, four Germans, two Luxembourg nationals, one Swiss, one Belgian, one Egyptian, one Ukrainian, one Nigerian, one Cameroonian and one Malian, Ouedraogo said. The six crew members were Spanish, according to the Spanish pilots’ union.