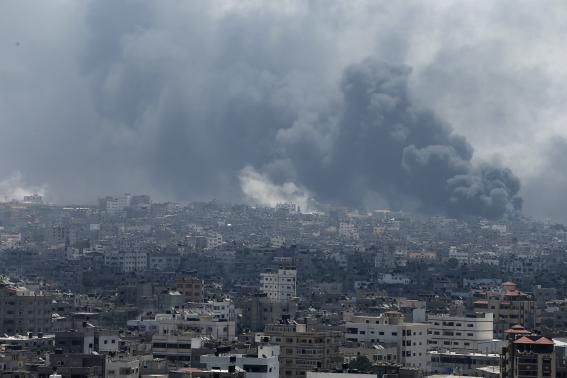 The U.S. Federal Aviation Administration halted air travel to or from Tel Aviv, Israel for at least 24 hours after a rocket fired from Gaza struck near the Ben-Gurion International Airport. CREDIT: REUTERS/MOHAMMED SALEM
Share:
Israeli forces pounded multiple sites across the Gaza Strip on Wednesday, including the enclave’s sole power plant, and said it was meeting stiff resistance from Hamas Islamists, as diplomats sought to end the bloodshed.

In a blow to Israel’s economy, U.S. and European air carriers halted flights in and out of Tel Aviv citing security worries after a militant rocket from Gaza hit a house near the airport. Israel urged a re-think, saying its airspace was safe.

U.S. Secretary of State John Kerry was in Egypt and U.N. Secretary General Ban Ki-moon in Israel, spearheading international efforts to secure a ceasefire. Hamas ally Qatar was also working in the background to seek a solution.

Israel launched its offensive on July 8 to halt missile salvoes by Hamas Islamists, which was angered by a crackdown on its supporters in the nearby occupied West Bank and suffering economic hardship because of an Israeli-Egyptian blockade.

After failing to halt the militant barrage through days of aerial bombardment, Israel sent ground troops into Gaza last Thursday, looking to knock out Hamas’s missile stores and destroy a vast, underground network of tunnels.

Some 630 Palestinians, many of them children and civilians have died in the conflagration, including a seven-year-old hit by a shell in southern Gaza early Wednesday, a medic said.

Some 29 Israeli soldiers have been killed, including a tank officer who was shot by a Palestinian sniper overnight. Two civilians have been slain by rocket fire. The military says one of its soldiers is also missing and believes he might be dead. Hamas says it has seized him, but has not released his picture.

Clouds of black smoke hung over the densely populated Mediterranean enclave, with the regular thud of artillery and tank shells filling the air.

“We are meeting resistance around the tunnels … they are constantly trying to attack us around and in the tunnels. That is the trend,” said Israeli military spokesman Lieutenant-Colonel Peter Lerner.

He said 30 militant gunman had been killed overnight, bringing the total to 210 since the offensive started.

Hamas’s armed wing, the Izz el-Deen Al-Qassam, said its fighters had detonated an anti-personnel bomb as an Israeli army patrol passed, killing several troops. There was no immediate confirmation from Israel.

There was also violence in the occupied West Bank, where a Palestinian was shot dead by Israeli troops near Bethlehem. The army said soldiers fired a rubber bullet at him during clashes with Palestinians hurling rocks and Molotov cocktails.

The Palestinian decision-making body led by U.S.-backed President Mahmoud Abbas on Wednesday endorsed demands by Hamas for halting Gaza hostilities with Israel, a closing of ranks that may help Egyptian-mediated truce efforts.

Egypt has tried to get both sides to hold fire and then negotiate terms for protracted calm in Gaza, which has been rocked by regular bouts of violence since Israel unilaterally pulled out of the territory in 2005.

Hamas, which refuses to recognize Israel’s right to exist, has baulked at Cairo’s offer, saying it wanted assurances of relief from an Israeli-Egyptian blockade and other concessions. The dispute was further complicated by distrust between Egypt under President Abdel Fattah al-Sisi and Hamas.

In a move that could effectively turn Abbas into the main Palestinian point person for a Gaza truce, his umbrella Palestine Liberation Organization (PLO) on Wednesday formally supported core conditions set by the Hamas-led fighters.

European airlines also canceled flights to Israel, whose own carriers continued to operate.

An Israeli official said Netanyahu had asked Kerry to help restore the U.S. flights. A U.S. official said the Obama administration would not “overrule the FAA” on a security precaution but noted the ban would be reviewed after 24 hours.

Because Washington, like Israel and the European Union, deems Hamas a terrorist group, they have no direct contact and Washington must rely on proxies such as Egypt, Qatar and Turkey.

In a sign of the intensity of the U.S. diplomacy, Kerry spoke to Netanyahu and to Qatari and Turkish foreign ministers after meeting Sisi for two hours, a senior U.S. official said.

“The Egyptians have provided a framework and a forum for them to be able to come to the table to have a serious discussion together with other factions of the Palestinians,” Kerry said. “Hamas has a fundamental choice to make and it is a choice that will have a profound impact for the people of Gaza.”

Hamas says it will keep fighting until its demands are met, including the release of several hundred supporters recently arrested in the West Bank and a freeing up of Gaza’s borders.

Adding to the enclave’s woes, residents said Israel shelled their power plant which provides electricity to half the people of Gaza. Electricity supplies from Israel were hit last week, with Israel saying militant rockets had damaged infrastructure.

The upcoming Eid al-Fitr festival – Islam’s biggest annual celebration that follows the end of the fasting month of Ramadan this weekend – could provide all sides with a convenient moment to agree to a cease-fire.

Asked about Eid, a senior Obama administration official said: “It’s a potential opportunity. We want there to be a cease-fire as soon as possible basically, and insofar as that’s a marker that can compel Hamas to the table that would be a good thing, but the bottom line is they’re going to have to stop firing rockets.”

The Israeli army spokesman said that while militants continued to fire out of Gaza, there had been “a substantial decline” in attacks over the previous 24 hours.