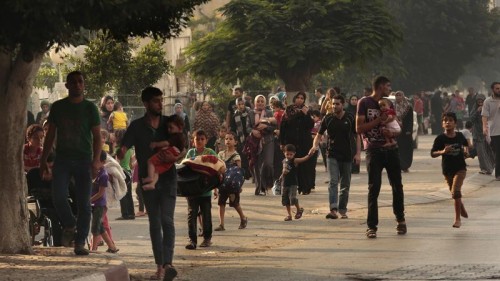 Men and women, some carrying their children, evacuate the Shajaiya area of Gaza City.
Share:

Gaza’s neighborhoods came under heavy shelling Monday as rockets continued to fly into Israel, and armed encounters between the sides claimed more lives ahead of U.S Secretary of State John F. Kerry’s  expected arrival in the region.

Even as Kerry and U.N. Secretary General Ban Ki-moon prepare to weigh in and Hamas leader Khaled Meshaal was set to meet with Palestinian Authority President Mahmoud Abbas in Qatar, a cease-fire seemed far off and the crisis deeper than ever.

One airstrike killed 11 members of the Siyam family in Rafah; in Khan Younis, 16 members of the Abu Jami family died when their house was shelled, the Palestinian news agency Maan reported.

In Shajaiya, emergency teams recovered more bodies from rubble left Sunday by an Israeli bombardment, pushing the Palestinian death toll in the two-week crisis above 500.

Casualties also mounted on the Israeli side as the military pushed deeper into crowded neighborhoods of Gaza in search of an elaborate network of tunnels dug under the strip to harbor weaponry and militants. Militants engaged ground forces with gunfire, antitank missiles and explosives. One fierce battle ended with 10 dead militants; Israeli casualties were not immediately reported.

Since the ground operation began, 18 Israeli soldiers have been killed, including two U.S. citizens, and more than 80 injured.

About 59,000 Israeli reservists are already on active duty as the army stands by for government instructions to expand the operation in numbers and targets if needed. Israeli leaders said Monday that all options were on the table and that the operation would not end before the tunnels that burrow into its territory have been destroyed.

“This is not the time to talk of a cease-fire,” Israeli Cabinet member Gilad Erdan told reporters outside Barzilai hospital in Ashkelon on Monday. “This mission cannot be completed until the strategic threat of tunnels is lifted,” Erdan said, adding that Israel’s military should stay in the northern perimeter of Gaza until an arrangement that would demilitarize Gaza in the long term was achieved.

Several other Cabinet members indicated Monday that the operation was not about to end.

After security consultations with his defense minister and army chief of staff, Israeli Prime Minister Benjamin Netanyahu said the operation would be “expanded until the goal is achieved — restoring quiet to the citizens of Israel for a long period.”

Since Thursday, 43 shafts leading to 16 tunnels in various locations throughout the Gaza Strip have been uncovered by troops and six tunnels have been destroyed with explosives and other means, according to military officials. Netanyahu said the results of the military campaign against the tunnels “exceeded expectations.”

At least 10 militants were killed Monday morning after infiltrating into Israel through a tunnel emerging near the border with Gaza and firing an antitank missile at an army jeep. It was the third such infiltration by militants into Israel via tunnel in two days, underscoring Israel’s concern about cross-border tunnels.

In the latest incident, roads were blocked and the residents of several communities were instructed to lock themselves in their homes while the army combed houses and countryside. The army has increased deployment in and around the communities near Gaza to counter the increasing attempts.

Although appearing slightly diminished in scope and range, rocket fire into Israel has persisted throughout the operation despite the destruction of around 3,000 rocket launchers, according to army officials.

Officials say that Israel has found a working, if not hermetic, answer to incoming rockets with the Iron Dome air-defense system but that the Palestinians retain about 50% of their arsenal. Barrages targeted the south of Israel on Monday morning, with another volley intercepted over Tel Aviv.

Increasingly, Israeli officials speak of the need for a long-term demilitarization of Gaza after a cease-fire is reached. “This is something we will discuss with the international community,” Justice Minister Tzipi Livni told reporters over the phone. For now, however, the operation remains focused on the tunnels, she said.

There was no official comment on a report in the London-based Arabic-language newspaper Al-Arab on Monday claiming Israel recently bombed weapons earmarked for Hamas and stored in a warehouse in Sudan, north of Khartoum.

9:03 P.M. The IDF released the names of the other six soldiers killed in the last 24 hours: Lt. Col. Dolev Keidar, 38, of Modi’in; Sergeant Nadav Goldmacher, 23, of Be’er Sheva; Warrant Officer Baynesain Kasahun, 39, of Netivot; 1st Lt. Yuval Heiman, 21, of Efrat – all four were killed by anti-tank rocket fired by Gaza militants, in a breach into Israeli territory near Nir Am.

8:42 P.M. Probe into Saturday’s incident, in which seven Golani troops were killed when their APC was hit by an RPG, reveals they were hit after their armored vehicle stalled. The IDF says the decision to deploy the soldiers in an old APC was made with awareness of the lacking protection the APC provided.  Haaretz

8:30 P.M. Turkey’s government announces a three-day period of national mourning, starting on Tuesday, in a show of solidarity with Palestinians in Gaza. (AP)

The IDF released the name of one of the seven: Staff Sergeant Yuval Dagan, 22, of Kfar Saba, from the Golani Brigade.

The IDF Spokesperson’s Unit also stated that in the last 24 hours three soldiers were seriously wounded, eight were moderately wounded, and 19 other soldiers sustained light wounds in Israeli army activity in Gaza  Strip.

7:08 P.M. Palestinian President Mahmoud Abbas’s entourage in Qatar stated that his meeting with Hamas leader Khaled Meshal was “good and important. Abbas and Meshal agreed that they’re interested in immediate cease-fire and in Egyptian involvement, despite reservations about the Egyptian initiative. Fatah senior official Azam al-Hamd was sent to Cairo to promote efforts there.”

6:58 P.M. Iron Dome intercepts a rocket above central Israel. Another rocket intercepted above Yavneh. Earlier, rocket sirens were sounded in central Israel, including in Bat Yam, Holon, Rishon Letzion, and in the vicinity of the international airport.

6:27 P.M. Hamas senior official Ismail Haniyeh says: “Our people’s demands are clear – a cessation of aggression and a promise that it will not be resumed, removing the blockade and releasing the prisoners arrested during the IDF’s activities in the West Bank.”

6:18 P.M. In an address at the White House, U.S. President Barack Obama says he instructed secretary of state John Kerry to push for an immediate cease-fire. Obama says the U.S. is seriously concerned over the rising number of Palestinian civilian casualties, and over the loss of life on the Israeli side. “We don’t want to see any more Palestinian civilians killed,” Obama says.

6:00 P.M.  Egypt might be willing to amend its truce initiative to end the fighting in Gaza in order to accommodate the Palestinian militant movement Hamas, which had rejected its terms, three Egyptian officials told Reuters.

“Egypt does not mind adding some of Hamas’s conditions provided that all involved parties approve,” a senior Egyptian official said.

The change in the Egyptian stance is believed to have occurred against the background of a meeting between Palestinian President Mahmoud Abbas and Hamas leader Khaled Meshal in Doha, capital of Qatar. According to Palestinian sources, the new offer will be adopted by the Palestinians, and presented on their behalf to the Arab League, the UN chief and the U.S. Secretary of State John Kerry. At this stage it is still unclear what understandings have been reached by the Palestinians and Egypt, but it is believed that they include a reopening of the Rafah Crossing, to be manned by Palestinian Authority presidential guard and police. (Reuters, Jack Khoury)

5:10 P.M. Commander of the IDF Southern Command, Maj.Gen. Sami Turgeman, says Israeli troops have uncovered 14 tunnels in the Gaza Strip since the operation began, two of which targeting Israeli communities near the border – Netiv Haasara and Kerem Shalom.

5:00 P.M. Medecins Sans Frontieres (Doctors Without Borders) has called on Israel to stop shelling in the Gaza Strip, saying it is complicating efforts to provide care. In a statement published on its website Sunday, MSF said, “the majority of the dead and wounded in Gaza are civilians and medical workers are also coming under fire.”

The organization also said it had witnessed two paramedics who had died and two others who were injured whilst trying to rescue wounded from Shujaiyeh. In addition, MSF said, “a clearly identified MSF vehicle escaped an air strike 300 meters away.” It added that Israeli authorities had promised secure movements for the organization from the Erez border crossing to Gaza City “so that an incoming surgical team could be picked up.”

3:45 P.M. Israeli tank shell hits the third floor of Al-Aqsa hospital in the central Gaza Strip, killing five people and wounding 70, Gaza Health Ministry says. A spokesman for the ministry says the third floor houses an intensive care unit and operating rooms. Other shells had fallen around the hospital, he says, with officials calling on the Red Cross to help evacuate patients. According to the report, all the casualties are medical personnel and patients.

It was also reported that ambulances were called in to evacuate the wounded to the Shifa Hospital in Gaza City, but were fired upon by IDF troops, damaging two vehicles, the spokesman said. The IDF does not allow emergency teams to evacuate wounded with prior coordination through the Red Cross – a process which can take hours. (Jack Khoury, Amira Hass)

So far, Israeli troops uncovered 45 tunnel shafts, some inside homes and mosques, the IDF Spokesperson’s Unit says. Since the ground incursion into Gaza began, 160 militants were killed.

2:58 P.M. Israeli Prime Minister Benjamin Netanyahu says the operation will expand until its goals are achieved. “The IDF is advancing on the ground according to plans, and the operation will continue to expand until its goal is achieved – restoring the calm to Israeli citizens for a long time,” Netanyahu says after a meeting with Defense Minister Moshe Ya’alon, Chief of Staff Benny Gantz and the commander of the IDF Southern Command, Maj. Gen. Sami Turgeman.