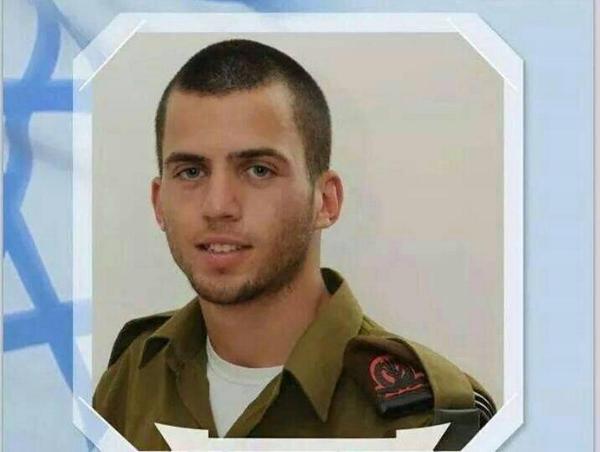 The Hamas-affiliated Izz ad–Din al Qassam Brigades  published a picture of the Israeli soldier  that it had captured , the first since the release of Gilad Shalit in 2011.

Al-Qassam Brigades said during a speech by spokesman Abu Ubaida aired live on Ma’an News that the captured soldier is named Shaul Aron and his military number is 6092065.

In response to Israeli  denial Abu Ubaida said;
“The fact that they did not confirm (the loss of the soldier) shows that they were trying to hide their losses.”The spokesman also warned Israel against taking any steps toward “any kind of foolishness,” saying that it was better for them to respond to the rights of the Palestinian people but instead Israel insisted on arrogance.News of the kidnapping sparked celebration across Palestinian cities, with gunshots and fireworks heard in Gaza City, Bethlehem, and elsewhere.

Many welcomed  the news on a day in which more than 100 Palestinians were killed in the most intense bombardment of the Gaza Strip since 2009, including 66 in the neighborhood of Shujaiyya alone.

In the past, Israel has agreed to release Palestinian prisoners kept in Israeli jails in exchange for kidnapped Israeli soldiers, and Hamas has called for soldiers to be captured with this aim.

Currently, more than 6,000 Palestinians are being held in Israeli jails, hundreds of which are being held under administrative detention without charge or trial for indefinite periods of time.

The last time Hamas captured an Israeli soldier was Gilad Shalit in 2006. He detained for six years in the Gaza Strip following the capture, which occurred at the Israel-Gaza Strip border.

Shalit was eventually released as part of a deal in 2011 in exchange for more than 1,000 Palestinian prisoners in Israeli jail.

In June and July, Israel re-arrested dozens of those former prisoners in violation of the deal as part of Operation Brother’s Keeper, which targeted Hamas members across the West Bank.