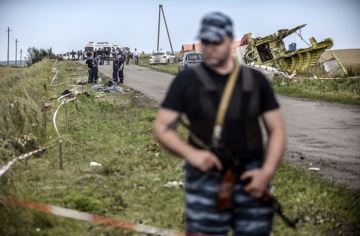 Ukrainian rebels said they are in possession of the flight recorders from the Malaysian Air jet that crashed in a rural district of the country as international reconnaissance crews struggled to gain access to the site.

Self-proclaimed Premier Alexander Borodai of the so-called Donetsk People’s Republic said he believes his forces retrieved the devices and have stored them in the embattled region’s capital city, from where they will be handed over to experts. Vitaliy Nayda, the spokesman for the Ukrainian state security services, acknowledged on state TV that the rebels have them.

“We have found some technical parts,” Borodai said in a release. “We assume that they are black boxes. We do not have aviation experts and that is why we cannot state precisely that they are. Those parts have been delivered to Donetsk and they are under my control. We are waiting for experts to pass on the stuff.”

While the recorders may prove of limited technical value to reconstruct the cause of the crash that killed all 298 people on board the flight from Amsterdam to Kuala Lumpur, the uncertainty surrounding the devices’ whereabouts add to the chaos of an investigation caught in the regional military standoff. Malaysia’s Transport Ministry demanded the boxes are handed over to an international team involved in the probe.

With access still limited at the eastern Ukrainian crash site, about 90 minutes from Donetsk, Ukraine, experts and government authorities have maintained that they don’t know the location of the black boxes. While Ukraine Deputy Prime Minister Volodymyr Hroisman said he was aware of reports attributed to Borodai, the government had no official information on the black boxes’ whereabouts.

The two boxes typically kept in an aircraft rear section are usually a vital piece of any investigation into an accident because they store key data and cockpit voices that can help reconstruct the moments before a crash. In the case of Malaysian Air MH17, any data may prove of little value because the supposed missile strike that took out the jet will at best be recorded in milliseconds.

“The black box probably will tell us nothing more than that this airplane was a perfectly good airplane right in, up to the moment that that missile hit it,” Steve Ganyard, a former deputy assistant secretary of state who is President of Avascent International, A Washington-based strategic consultancy, told ABC television. “Right now, we know that a missile brought this airplane down. It’s not a conventional crash.”

The July 17 shooting of Flight 17 has drawn international condemnation against Russia for its support of pro-Russian rebels, who are closely guarding the crash site and limiting access to international disaster teams and monitors from the Organization for Security and Cooperation in Europe.

Malaysian Transport Minister Liong Tiong Lai, who arrived in Ukraine today as part of an international investigative team, said his country is “very concerned that the sanctity of the crash site has been severely compromised.”

There are two devices on a commercial plane that store information. One records cockpit conversations and noises, while the other stores key data from the aircraft’s performance. The boxes, which are bright orange to help their retrieval in debris, are fortified to withstand major impact.

The search on land for the recorders is typically swift, unless the terrain is rugged or swampy, while air accidents into the sea can require long missions to turn up the boxes. Air France needed two years to find the boxes of an Airbus A330 that went down in the Atlantic Ocean in 2009, while the hunt Malaysian Air Flight MH370, which went missing in March, has uncovered no trace of either data devices or any other piece of the jet.

“The photos show the scene of the crash to be ordinary, rolling farmland and rural communities, so with a proper search for the recorders I’d have expected them to be found already,” said Paul Hayes, the head of safety at London-based aviation data collector Ascend Worldwide. ‘But I have no knowledge of the people controlling the crash site. Or is anyone controlling the site?’’