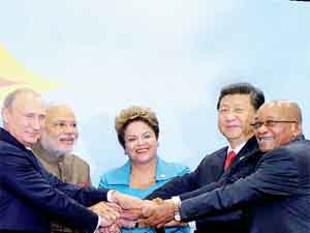 The BRICS bank is finally born. After a long pregnancy, the New Development Bank (NDB) is here, carried into the Brazilian sunshine by its exhausted, but relieved ‘parents’. As well as conveying richly deserved congratulations, now seems a good time to reflect on how we got here, and also to consider the prospects for this fledgling bank.

Two questions arise. First, as there’s no shortage of multilateral finance institutions, why create another one? And second, given the characteristics of this new bank, and the world it’s been born into, will it be able to fulfil its parents’ ambitions?

The first question has at least four answers: geopolitical shifts, static voting rights at the World Bank and IMF, shortfalls in financing for infrastructure, and the national priorities of the BRICS countries.

For geopolitics, a historic shift from old to the rising powers is under way. Economically, this can be seen most clearly through long-term growth prospects. Politically, the locus of decisionmaking is moving from the G-7 to the G-20. Financially, the 2008 crisis has left old-power governments and their banks mired in debt and toxic assets. While growth has slowed in the emerging economies, and prospects brightened in some old powers, few doubt the depth or permanence of this shift.

One purpose of the NDB is simply to reflect this. Had existing institutions adjusted this might not have been necessary, but despite years of tortuous negotiations little has changed. I will not dwell on well documented injustices, but simply note that Belgium has more IMF votes than Brazil. Tired of waiting for their economic weight to be reflected in international financial institutions, the BRICS countries understandably decided to set up their own.

What about national ambitions? It is well-known that there have been tensions about the NDB: voting based on economic weight would see China dominate; only China and Russia run surpluses for which the NDB might originally have been a conduit; and then there are the questions of where to locate, and whether non-BRICS should be able to join and on what terms.

This brings us to the second question: will the NDB be able to fulfil its parents’ lofty ambitions? As a geopolitical statement, it has already done so. Media interest remains high, the World Bank is increasing spending on infrastructure, and many development finance institutions are engaged in charm offensives in developing countries as they attempt to retain market share.

Whether it will affect the infrastructure funding gap is more doubtful. Subscribed capital is $50 billion, of which $10 billion is paid-in, and authorized (i.e. potential) capital is $100 billion. To put this in perspective, subscribed capital in the World Bank and Asian Development Bank is $223 billion and $162 billion respectively. Nationally, the China Development Bank has assets in excess of $1 trillion, and Brazilian Development Bank $333 billion. Compared to the funding gap the additional lending that the NDB’s capital could add to this mix is a drop in the ocean.