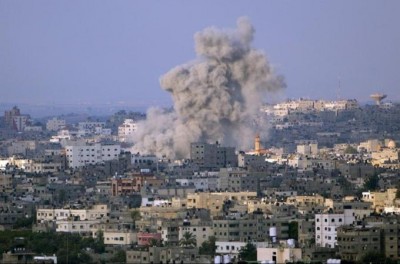 By: * Marwan Bishara
So much has changed, so little has improved two decades after Israel and the PLO signed the Gaza-Jericho Agreement that paved the way for the beginning of limited Palestinian self- rule.

I witnessed first-hand peoples’ joy as the Israelis withdrew from the populated centres in the spring of 1994. The arrival in Gaza of PLO leader Yasser Arafat soon after – 20 years ago this month – seemed to open a new chapter in the modern history of Palestine and Israel. Even the sceptics and the Islamists couldn’t hide their pleasure at seeing the back of their Israeli tormenters.

Israel had redeployed its military among the Palestinian camps and towns where it maintained a few illegal Jewish settlements along with their fences and swimming pools.

The signed agreement stipulated that the 5,000 or so settlers would continue to control 40 percent of the strip while more than a million Palestinians were squeezed into less than 60 percent of Gaza, home to the oldest, most impoverished refugee camp.

This lopsided vision of peace persisted in the following six years. The Palestinians signed multiple transitional agreements, only to see their freedoms and territory shrink with each internationally celebrated ceremony. The “peace of the brave” was slowly exposed as the peace of the reckless – short on peace, long on process, and culminating in ever more frustration, hostility and violence.

Since its inception in 1993, the Oslo Process was based on an imbalance of power. It reflected Israel’s strategic superiority to dictate certain terms, but also its inability to impose its will on the defiant Palestinians who refused to surrender.

It’s fundamentally unstable. Unlike peace based on defeat (US and Japan post-World War II) or balance of power (Egypt and Israel), the Israeli-Palestinian peace has been marked by conflicting expectations and disruptive ambiguity.

That’s why instead of a comprehensive peace settlement, Israel insisted on phased peace accords that allowed it to dictate the pace of progress in a transitional process. Agreements were reached in phases, and implemented in stages, forcing the Palestinian Authority to prove its security-worthiness to Israel by cracking down on “extremist”, Islamists and secularists alike.
Likewise, Israel expanded its illegal settlements while imposing a hermetic system of control over the Palestinian population centres.

As a result, two separate systems emerged in the Gaza strip and the West Bank; a superior one for Israel and its settlers that encompassed industrial zones, rich water resources, and modern road networks, and a second subordinate closed system for the indigenous Palestinian population living in separate Bantustans.

This worsened the precarious equilibrium characterized by instability and recurring violence between occupiers and occupied, between illegal settlers and indigenous residents.

The Palestinians, and to some degree the Israelis, became the casualties of a process that promised peace and security but produced insecurity and division. The persistent occupation led to deeper radicalisation in both societies, the people grew geographically closer and politically evermore distant.

In 2000, Israel failed to force the PLO at Camp David to accept its lopsided vision of a permanent solution. The Palestinians treated its “generous offer” as a diplomatic insult that fell short of meeting their basic historic and national rights.

And from there onwards, the situation has gone from bad to ugly.

Weakening Fatah, strengthening Hamas, and back

The repression under Ehud Barak intensified with the advent of Ariel Sharon. The extremist leader exploited the US global war on terror after the 9-11 attacks to wage his war against “Arafistan”. In no time, Israel’s assault turned into a full-scale war against the Fatah-led Palestinian Authority, destroying its institutions and security forces, in an act of what Israeli sociologist Baruch Kimmerling called “politicide”.

The ascendance of the more “moderate” Mahmoud Abbas to the presidency after Arafat’s death didn’t lead to a Fatah recovery as Israel continued to dictate its conditions on the new leader and his government. Worse, Abbas’s gamble on diplomacy backfired as Israel expanded its settlements in the West Bank but withdrew its settlers from the Gaza strip under the heat of Hamas’s resistance.

From then on, Fatah and Hamas have been competing, even fighting over who will rule the Palestinians in their open-air Gaza prison. But Israel has remained the occupying power in terms of its control over all of Gaza’s connections to the outside world. And it has continued to use force there whenever it deemed it necessary, as it has done this month – the latest in a series of invasions, incursions, bombardments and siege.

The historic record makes clear that Hamas grows stronger not weaker with each and every Israeli aggression. Like the Lebanese Hezbollah, it’s no less capable of cutting through Israel’s deterrence.

Alas, none of this is registering with Israel’s leaders. Their political expediency and ideological blindness are deepening Israel’s insecurity and worsening its strategic standing. Their failure to subjugate Palestine into a greater Israeli control continues to backfire, and in the process do away with the two-state solution.

For their part, the strategic myopia of the Palestinian leaders has trapped them in a corner. Their hunger for power and lack of real commitment to national unity have let down their people and undermined their struggle for freedom. It’s high time they rise to the level of their people’s suffering and endurance.

Having said that, the onus remains on the occupying power, Israel. Much of its complaints about the Palestinians, whether real or imagined, are primarily a by-product of its occupation and dispossession of their national rights, not the opposite.

That’s why a ceasefire must go beyond curtailing Israel’s firepower to lift the siege on Gaza and pave the way for negotiations based on fairness not power; on legality not force.

It’s high time to forego the killing and destruction in favour of a peace agreement. Unlike war, peace need not be a zero-sum game.

*Marwan Bishara is the senior political analyst at Al Jazeera.