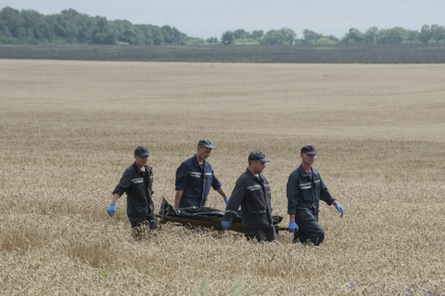 HRABOVE, Ukraine — Armed separatists hampered access to the Malaysia Airlines crash site Saturday, limiting the movements of international monitors and raising concerns that evidence showing who brought the plane down and killed the 298 people onboard would be lost, tampered with or destroyed.

At the crash site itself in rebel-held eastern Ukraine, the smell of decay was unmistakable. Dozens of victims’ bodies lay decomposing in the summer heat, either flung upon the ground in contorted positions after Flight 17 was shot out of the sky or piled Saturday into body bags that emergency workers left by the side of the road.

“Some of the body bags are open and the damage to the corpses is very, very bad. It is very difficult to look at,” OSCE spokesman Michael Bociurkiw told reporters in a phone call from the site.

Flight 17 from Amsterdam to Kuala Lumpur was carrying 283 passengers and 15 crew Thursday when it was shot down in eastern Ukraine close to the Russian border, an area that has seen months of clashes between government troops and pro-Russia separatists. The victims came from 13 nations, including 192 Dutch citizens and 80 children.

At an emergency meeting of the U.N. Security Council, the U.S. pointed blame at the separatists, saying Washington believes the jetliner likely was downed by an SA-11 missile and “we cannot rule out technical assistance from Russian personnel.”

Ukraine on Saturday accused Russia of helping separatist rebels destroy evidence at the crash site — a report the rebels denied.

Bociurkiw said the 24-member monitoring delegation was given some access Saturday to the crash site but their movements were being limited by the rebels. The site sprawls across sunflower and wheat fields between two villages in eastern Ukraine, encompassing eight square miles (20 square kilometers).

“We have to be very careful with our movements because of all the security,” Bociurkiw said. “We are unarmed civilians, so we are not in a position to argue with people with heavy arms.”

The government in Kiev said militiamen have removed 38 bodies from the crash site and have taken them to the rebel-held city of Donetsk. It said the bodies were transported with the assistance of specialists with distinct Russian accents.

The rebels are also “seeking large transports to carry away plane fragments to Russia,” the Ukrainian government said in a statement.

In Donetsk, separatist leader Alexander Borodai denied that any bodies had been transferred or that the rebels had in any way interfered with the work of observers. He said he encouraged the international community to help with the cleanup before the bodies decay further.

As emergency workers loaded about 80 bodies of plane victims into bags Saturday, Bociurkiw stressed that his team was not at the site to conduct a full-scale investigation.

One passenger’s body was seen still strapped into an airline seat, with bare toes peeking out under long jeans. Another body was flung face-up into a field of blue flowers.

Ukraine also urged Moscow to insist that the pro-Russia rebels grant international experts the ability to conduct a thorough, impartial investigation into the downing of the plane — echoing a demand that President Barack Obama issued a day earlier from Washington.

“The integrity of the site has been compromised, and there are indications that vital evidence has not been preserved in place,” Malaysian Transport Minister Liow Tiong Lai said at a news conference in Kuala Lumpur.

He called for immediate access for Malaysia’s team at the site to retrieve human remains.

Ukraine said it passed along all information on developments relating to Thursday’s downing to its European and U.S. partners.

The commission should examine the circumstances of the crash and recover the victims, said Streiter, adding that Merkel urged Putin to use his influence over the separatists to make that happen.

In Moscow, Deputy Russian Defense Minister Anatoly Antonov questioned Ukraine’s willingness to present a full accounting of its inventory of surface-to-air and air-to-air missiles in the region.

In the Netherlands, forensic teams fanned out across the country Saturday to collect material including DNA samples that will help positively identify the remains of the 192 Dutch victims.

Police said in a tweet that 40 pairs of detectives from the National Forensic Investigations Team would be visiting victims’ relatives over the coming days.

The location of the black boxes remains a mystery and the separatist leadership remained adamant Saturday that it had not located them. Bociurkiw also said he had received no information on their whereabouts.

Aviation experts say, however, not to expect too much from the flight data and cockpit voice recorders in understanding how Flight 17 was brought down.

The most useful evidence that’s likely to come from the crash scene is whether missile pieces can be found in the trail of debris that came down as the plane exploded, said John Goglia, a U.S. aviation safety expert and former National Transportation Safety Board member.

The operation of the Flight 17 doesn’t appear to be an issue, he said.

Obama called the downing of the plane “a global tragedy.”

“An Asian airliner was destroyed in European skies filled with citizens from many countries, so there has to be a credible international investigation into what happened,” he said.

Both the White House and the Kremlin have called for peace talks in the conflict between Ukrainian government forces and Russian-speaking separatists who seek closer ties to Moscow. Heavy fighting took place Friday around Luhansk, less than 100 kilometers (60 miles) from the crash site, with 20 civilians reported killed.

Malaysia Airlines, meanwhile, said Saturday it had no immediate plans to fly the relatives of the 298 passengers and crew killed to visit the crash site in Ukraine because of security concerns.

A spokesman for the airline says next of kin were being cared for in Amsterdam while a team from the carrier, including security officials, was in Ukraine assessing the situation.

In the Netherlands, travelers flying out of Amsterdam’s Schiphol Airport laid flowers and signed a condolence book before boarding their flights Saturday, including those on the latest Malaysia Airlines Flight 17 to Kuala Lumpur.